Miyamoto, a guiding force for a generation of young people, to retire after 37-year career 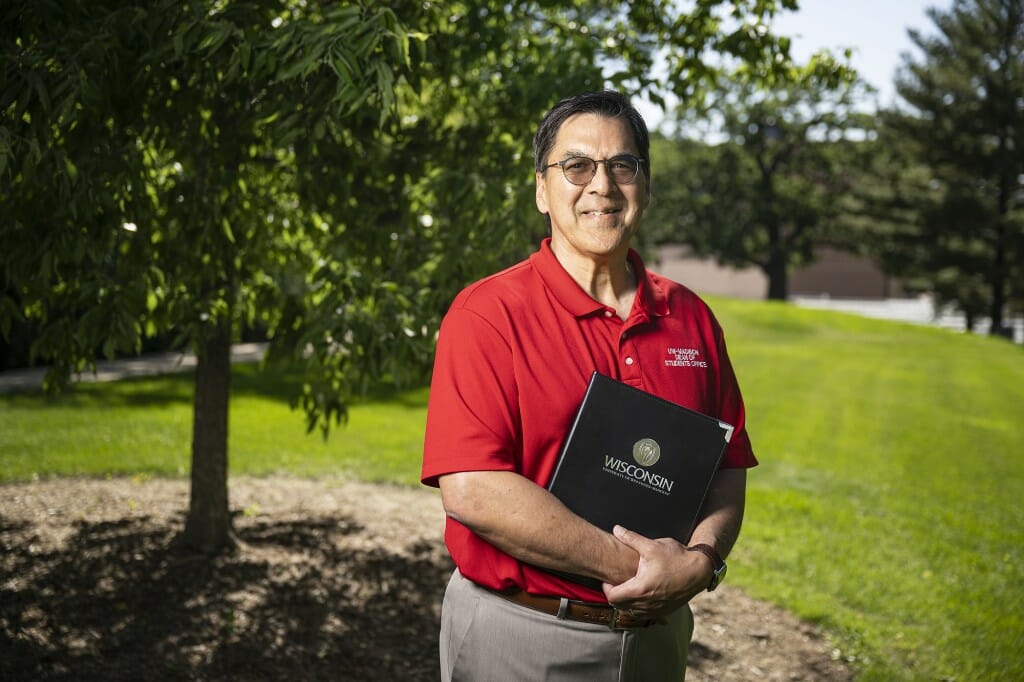 Mick Miyamoto, pictured on Observatory Hill, is retiring this month following a 37-career in student affairs that took him to several UW System campuses, including the last four years at UW–Madison, his alma mater. Photo: Bryce Richter

There are two songs that Mick Miyamoto says always cause him to choke up — “Nessun Dorma” by Puccini and “Varsity,” UW–Madison’s school song.

The latter helps explain why the last few years have been so meaningful to Miyamoto. After decades of work on college campuses mentoring, advising and coaching students — mostly within the UW System — Miyamoto returned to UW–Madison, his alma mater, four years ago to finish his career. He is retiring June 30 as special projects coordinator for Student Affairs.

“I wish everyone could end their career this way,” says Miyamoto, who earned his PhD from UW–Madison in 1993. “It’s been the cherry on the top.”

Colleagues and former students say his legacy can be seen in the hundreds of young lives he’s impacted. His 37-year career in student affairs included stints at UW–River Falls, UW–La Crosse and the University of Dubuque, where he spent nearly nine years as vice president and dean of student life.

“Mick truly has made a positive difference in my life each and every time I’ve had the honor of interacting with him,” says Ryan Jesberger, who was a student at UW–La Crosse from 2004-08 when Miyamoto was an assistant dean of students there.

Jesberger, now a lieutenant with the UW–Madison Police Department, says Miyamoto assisted him with countless advising questions, served as a member of his thesis committee, constantly challenged him to take his research to the next level, and provided a consistent, calming presence.

“Today, 14 years after my UW–La Crosse experience and in my current role at UWPD, I have had the honor of calling Mick a colleague as he continues to shape and mentor the current and future generations of Student Affairs leaders,” Jesberger says.

A standout high school football player, Miyamoto was recruited to be an offensive lineman at UW–La Crosse, where he earned a bachelor’s degree in art education in 1979. He spent five years teaching middle school art — he’s a ceramicist — and coaching high school football in the La Crosse School District while earning a master’s degree in college student personnel from UW–La Crosse. 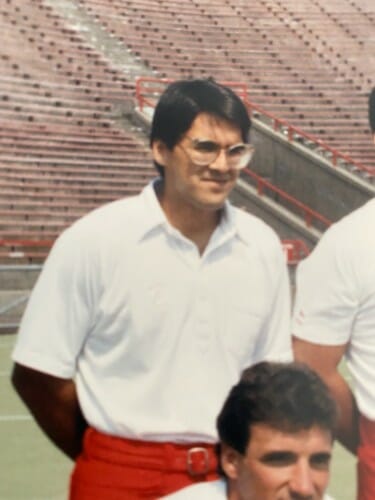 While earning a PhD at UW–Madison, Miyamoto served as a graduate assistant football coach. This picture is from a 1985 Badgers staff photo at Camp Randall Stadium. Contributed photo

Miyamoto came to UW–Madison in 1985 to pursue a PhD in higher education administration. While doing his doctoral coursework, he served two years as a graduate assistant football coach. (Paul Chryst, UW–Madison’s current head football coach, was a player at the time.)

Miyamoto coached football throughout much of his career while also serving in various Student Affairs positions. For his devotion to the sport, he was inducted into the Wisconsin Football Coaches Hall of Fame in 2016. His philosophy of coaching and teaching centers on helping young people mature into responsible, compassionate adults.

“As a coach, I wasn’t so much coaching football as coaching young men through football,” he says. “I felt the same way when I was teaching art, and I approach Student Affairs work the same way. It’s about building relationships and helping young people through their psychosocial development.”

Put another way, Miyamoto says, “I can’t tell you my win/loss record in football, but I can tell you I’ve been invited to a lot of weddings.”

Miyamoto first retired in 2018 from the University of Dubuque. It didn’t last long. Soon thereafter, Lori Berquam, UW–Madison’s dean of students at the time and a friend, asked him to consider coming to UW–Madison and serving as interim associate dean.

“There was no hesitation,” Miyamoto says. “It was always in the back of my mind that it would be a dream to come back here and work in some capacity.”

Miyamoto served as interim associate dean for a year, then became interim director of Recreation and Wellbeing on campus in 2019. Since 2020, he has been special projects coordinator for Student Affairs.

“Mick is one of the most understanding and compassionate individuals I have met on campus,” says UW–Madison senior Ebonie Reavis. “He talks to students with such a calming presence and offers such helpful action-oriented solutions. He makes the campus climate very welcoming and loving.” 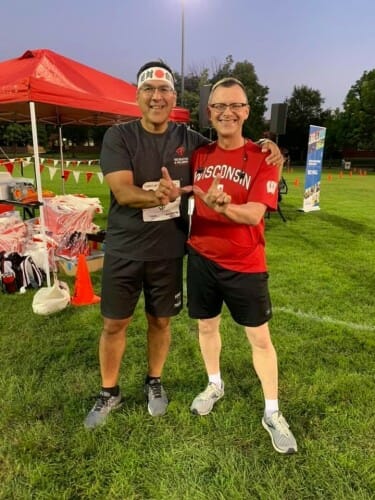 Miyamoto’s energy is palpable, says colleague Kathy Kruse, an assistant dean of students and director of the Dean of Students Office. “Anyone who has had the opportunity to be in Mick’s company knows his warmth, his deep compassion, and his full presence with each interaction.”

Part of Miyamoto’s role has been working with students who committed academic misconduct. He is among the facilitators of a restorative justice circle called Badgers Academic Integrity Matters.

“Mick creates a space for students to authentically share and learn from one another during these sessions,” says Kala Grove, a co-facilitator. “He encourages students to both accept responsibility for their actions and forgive themselves for mistakes they’ve made.”

During the sessions, many students reveal that stress and anxiety were factors that led them to cheat, says Tonya Schmidt, an assistant dean of students and director of the Office of Student Conduct and Community Standards. Miyamoto teaches them the art of mindfulness and encourages them, as a harm-reduction strategy, to use the Healthy Minds app from the Center for Healthy Minds on campus.

“And he also makes sure to tell each and every student that he is proud of them,” Schmidt says. “The bonds he has formed with students keep them engaged and encouraged and most of all make them feel like they belong.”

Mindfulness has become an important part of Miyamoto’s life. He leads a Monday morning Mindfulness Practice Group for Student Affairs staff and opens meetings with a few moments of mindfulness.

“Mick is always connecting people from different parts of campus who may have distinct areas of expertise but shared goals — all in the interest of supporting the mental health and well-being of students and staff,” says Susan Huber, director of well-being at the Center for Healthy Minds. “He truly cares about people and wants to make a positive difference in their lives — whether that’s by lending an ear, providing guidance, or sharing his favorite well-being resources.” 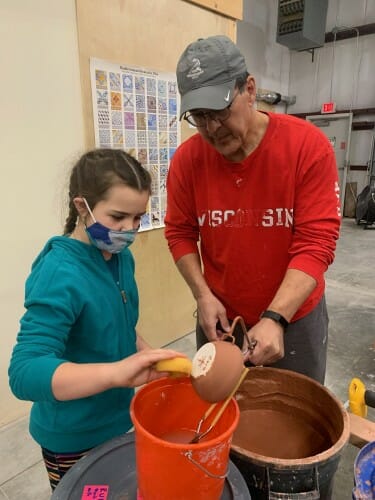 Miyamoto and granddaughter Cora work on a pottery piece at a ceramics studio. Contributed photo

Miyamoto says one of the things he’s proudest of in his career is helping people understand that the greatest gift you can give to someone is to be present.

“That solves a lot of issues,” he says. “If students and staff feel they’ve been genuinely heard, that goes a long way.”

In the months and years ahead, Miyamoto plans to volunteer for several organizations, throw a lot of pottery — he’s a member of the Midwest Clay Project & Studios — and spend time with his wife, Kathy, and their three children and two grandchildren.

“Someone asked me the other day what I’m going to do in retirement, and I think it will be the same as what I’ve always done — try to be kind, compassionate and present for people.”