For Terrence (Terry) Millar, UW–Madison professor emeritus of mathematics and former associate dean for physical sciences in the Graduate School and assistant to the provost, science education was always about the excitement of discovery. 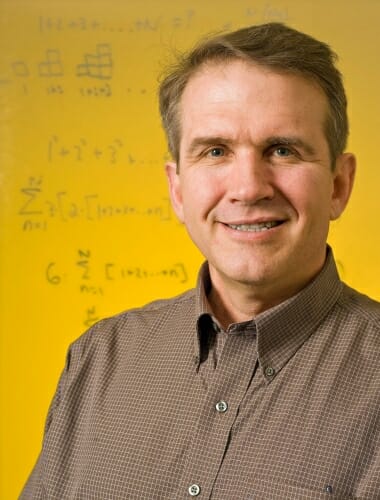 That discovery could be in the form of neutrinos piercing the crystal clear ice at the South Pole, or in the form of a basic science experiment in a classroom in a Madison elementary school.

Millar, 70, passed away on March 9 following a battle with pancreatic cancer. He was one of the world’s foremost researchers in computable model theory, a branch of mathematical logic, and is remembered by UW colleagues as a mathematician with a mind that never hit pause.

“Terry was always full of ideas about how mathematics could be a powerful and useful tool,” recalls Steve Ackerman, associate vice chancellor for research in the physical sciences. “He’d have a vision of what needed to be done, used logic to make his case, and was tireless in seeing his vision through to reality.”

Millar joined the UW–Madison mathematics faculty in 1976 after receiving his Ph.D. from Cornell University and having spent two years in the Marines — including a brief stint as forward artillery observer in Vietnam.

Up until his retirement from UW–Madison in 2015, he played an integral role in some of the largest physics experiments to date.

Millar, along with UW–Madison physics professors Sau Lan Wu and Wesley Smith, was central to Wisconsin’s contribution to development of the Large Hadron Collider, located near Geneva, Switzerland, at the European Organization for Nuclear Research (CERN). The LHC is the world’s most powerful particle accelerator and one of the discoveries made with the LHC includes the long sought-after Higgs boson.

Millar, along with UW–Madison Professor of Physics Francis Halzen, also was integral in launching the IceCube South Pole Neutrino Observatory. The National Science Foundation provided the primary funding for the observatory, with assistance from partner funding agencies around the world. UW–Madison is the lead institution, responsible for the maintenance and operations of the detector.

Closer to home, science education was a passion for Millar, who, among other courses, taught the university’s history of mathematics course. He was also heavily involved in K-12 science teacher training.

He was team leader of the National Institute for Science Education’s Graduate Science, Mathematics, Engineering, and Technology Education Team. He served as NISE interim co-director from September 1996 to July 1998.

During his time in administration in the Graduate School, Millar also led the charge for large grants for multiple school districts across the country and proudly shepherded the K-Through-Infinity Professional Development Partnership, which was partly funded through the NSF and joined a broad array of UW–Madison science, math and science research and education programs with the expertise of K-12 teachers.

“Terry and I worked as colleagues in the Graduate School for over 20 years,” says Martin Cadwallader, former dean of the Graduate School. “During that time I was repeatedly impressed by his tremendous energy and creativity. Without his leadership many of our major accomplishments, such as IceCube, KTI, GERS and CONDOR, would not have been achieved.

“Perhaps most importantly, he always behaved with the utmost integrity; never afraid to state and support his opinions with both logic and empirical evidence. This intellectual tour de force was accompanied by a marvelous and self-deprecating sense of humor, with appropriate nods to Monty Python.”

There will be a memorial service for Terry on Sunday March 24th in the Atrium Auditorium of the First Unitarian Society, 900 University Bay Drive. A visitation period will begin at 2 p.m., followed by the service itself at 3 p.m., and then a reception. All are welcome.