Mercile Lee, the architect and founding director of two of UW–Madison’s most respected and successful scholarship initiatives, the Chancellor’s and Powers-Knapp scholarship programs, died Oct. 25 in Madison.

She was 87. The cause was complications related to longstanding health issues, according to her family. 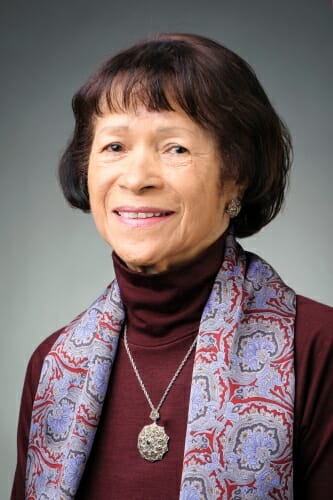 Lee spent nearly 30 years overseeing the scholarship programs, which are credited with attracting and supporting thousands of talented, underrepresented minority and disadvantaged students. She retired in 2013 as assistant vice chancellor for academic affairs.

“Mercile changed lives — and this university — in profound ways,” says Chancellor Rebecca Blank. “Her work to grow initiatives like the Chancellor’s and Powers-Knapp scholarship programs has been deeply important to our ability to attract top students from diverse backgrounds. She was a crucial advisor and mentor to generations of students in these programs, helping them succeed.”

Lee established the Chancellor’s Scholarship Program in 1984. She believed that part of the Wisconsin Idea was to create opportunities that would attract academically outstanding students who reflected the diversity of abilities, talents, backgrounds, and experiences within targeted minority groups.

“I knew that something had to be done to increase the number and retention of ethnic minority students on campus,” said Lee, in 1998.

Scholars who consistently meet program expectations receive a full tuition scholarship and a $400 book stipend each semester. More than half of the program’s graduates pursue graduate or professional degrees, with many going on to become leaders in business, education, medicine, engineering and other professions.

Today, the Chancellor’s and Powers-Knapp programs have created educational opportunities for more than 2,600 undergraduates, with 134 new scholars arriving on campus this fall.

“Because of Mercile, this institution is in a remarkably better place than we otherwise would have been,” says Paul DeLuca, retired provost and vice chancellor for academic affairs and Lee’s supervisor for many years. “Her impact goes right to student success. What she imbued in them was an astounding level of integrity and academic accomplishment. And they loved her for it.”

Her most prominent attributes, DeLuca says, were integrity and firmness. “She understood what needed to be done and the right way to accomplish it, and she kept her focus on it every minute of every day.”

More than 250 former scholars paid tribute to Lee at a gathering celebrating her retirement in 2013. Many of them referred to her as a kind of “mother,” exemplifying the personal pride she took in each student’s life.

“She opened not just her heart but even her home to students who wanted to acquire an education,” says Gloria Hawkins, who met Lee as a graduate student at UW–Madison and considers her a mentor. “It takes an extraordinary person to invest in others that way.”

Hawkins, now an assistant vice chancellor at UW–Madison, went on to be a friend and colleague of Lee’s for 30 years. Hawkins directs both scholarship programs that Lee established.

Throughout her academic career, Lee found herself amid history. As a student at Virginia Union University, a historically black university in Richmond, she guided a visiting Martin Luther King, Jr. on campus and began a friendship with the civil rights leader. The first in her family to attend graduate school (at Connecticut’s Hartford Seminary), she was also the first faculty member of color at Ottawa University, in Kansas, eventually chairing its Division of Education and Psychology.

Her passion and impact extended far beyond campus. In 1985, she helped create the Madison and Dane County Martin Luther King Coalition, honoring her mentor. In 2013, she was named a recipient of a Dr. Martin Luther King, Jr. Humanitarian Award by the city and county. The same year, the Madison Downtown Rotary Club presented her with the Manfred E. Swarsensky Humanitarian Service Award.

“Mercile Lee was a champion for excellence,” says Patrick Sims, deputy vice chancellor and chief diversity officer. “She was uncompromising in her commitment to the students of the Chancellor’s Scholars and Powers-Knapp programs. She always led with the highest expectations for greatness, seeing things in most of us that we didn’t see in ourselves. She brought out the best in us and we were all the better for it. She will indeed be missed.”

Lee’s family will be publishing a full obituary at a later date. A public service is planned from 11 a.m. to 1 p.m. Thursday, Nov. 29, at Cress Funeral Home, 3610 Speedway Road, Madison. Memorials may be made to the Chancellor’s and Power-Knapp scholarship programs through the Wisconsin Foundation and Alumni Association, 1848 University Ave., Madison, WI 53726.