Mental health in pregnancy may affect development of newborns’ brains 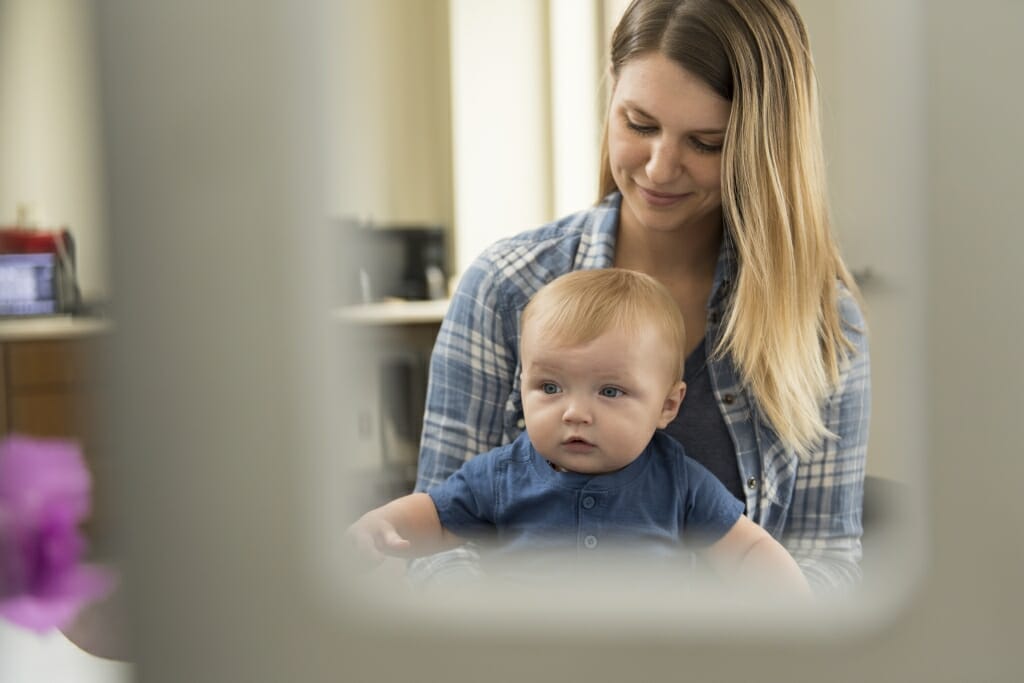 “One of our larger goals,” says study leader Richard Davidson, “is to better understand maternal and infant health more generally so we can try to develop interventions that might help improve mental health during pregnancy. Photo from the study by David Nevala/Center for Healthy Minds

Many factors can influence the development of a baby during pregnancy and after birth, but until recently, researchers knew little about the relationship between an expectant mother’s mental health and the subsequent development of her baby after birth.

Findings from a University of Wisconsin–Madison team published Monday, Aug. 27, in the journal JAMA Pediatrics suggest a relationship between a woman’s mental health symptoms and white matter development in her child’s brain at one month after birth.

“We found that kids who had mothers with higher levels of anxiety and depression symptoms had imaging measures that are generally assumed to represent poorer white matter microstructure, perhaps reflecting less-developed white matter in their brains,” says Doug Dean, a postdoctoral fellow at UW–Madison who led the analysis. “These pathways are important to healthy brain development and are known to influence mental health outcomes later in life.”

White matter is to the brain what electrical wiring is to a computer — it helps the brain process information quickly and forms connections between areas of the brain important for everything from bodily movements to managing emotions.

During pregnancy and in the months after birth, a dramatic reorganization of a baby’s brain takes place as white matter tissue begins self-organizing and laying down pathways for connections between neurons, allowing for speedy communication between brain regions.

In the study, researchers worked with roughly 100 expectant mothers who answered questions about their mental health during their third trimester —around 28 weeks and 35 weeks into their pregnancy. Women who participated in the study did not have a current diagnosed mental health disorder, but many experienced a range of depression and anxiety symptoms that are common during pregnancy.

Researchers were able to get a sense of expectant mothers’ perceived depression and anxiety symptoms by asking them to respond to statements like: “I have been able to laugh and see the funny side of things”; “I have felt sad or miserable”; and “I have been anxious or worried for no good reason.”

One month after women in the study gave birth, scientists used advanced brain imaging tools — including magnetic resonance imaging (MRI) and diffusion tensor imaging (DTI) — to scan the infants’ brains while the babies were napping.

Though the study provides new information about how mental health symptoms of moms affect their babies’ development, researchers warn there may be factors at play that weren’t accounted for in this study, including genetic variables that could be assessed in the future by looking at the same phenomenon in identical and fraternal twin populations.

Furthermore, scientists say it would be misguided to stigmatize expectant mothers for experiencing depression and anxiety symptoms during pregnancy, especially given that up to one-fifth of women develop them.

“One of our larger goals is to better understand maternal and infant health more generally so we can try to develop interventions that might help improve mental health during pregnancy,” says Richard Davidson, the William James and Vilas Professor of Psychology and Psychiatry, who led the work at UW–Madison’s Center for Healthy Minds. “We’re not sure what that might look like, but there are a variety of approaches, including therapy and mindfulness-based treatments that show promise and we hope to investigate further.”

So far, the scientific team has finished brain scans for these same children at 2 years of age and will begin to examine how those developmental trajectories play out. Future work, if funded, would enable scientists to track development in these kids for even longer periods of time and determine the impact of mental training exercises during pregnancy on the brain development of infants.

“For instance, we want to know: Do these results hold a few years down the line? Do they affect long-term development? Do kids who have less developed white matter catch up at some point?” says Dean. “We hope to get a better sense of how prenatal experiences affect longer-term outcomes, but there’s a lot we just don’t know yet.”

Davidson adds that these findings provide a compelling foundation for exploring the impact of interventions to cultivate well-being during pregnancy on babies’ neurodevelopment after birth and later in life.