M. Crawford Young, an emeritus professor of political science at the University of Wisconsin–Madison and one of the foremost scholars in the world on African politics, died Jan. 22 in Madison from complications related to congestive heart failure. He was 88. 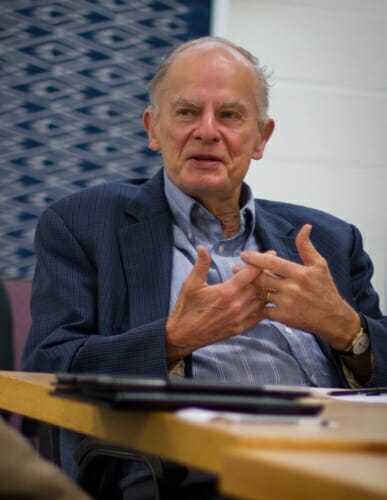 While the Department of Political Science was Young’s disciplinary base, he was a central figure in the creation of the university’s African Studies Program. His critical early leadership and support helped the program thrive and provided him with an interdisciplinary community of scholars that nurtured his work. He remained actively engaged with the program until his death.

“We have lost a man of towering intellect and an international scholar who was one of a kind,” says UW–Madison Professor Aili Mari Tripp, who worked closely with Young in the political science department and African Studies Program and considered him a mentor. Tripp is the Wangari Maathai Professor of Political Science and Gender and Women’s Studies and chair of the Department of Gender and Women’s Studies.

Young served two terms as director of the African Studies Program in the 1960s. Later, he twice chaired the Department of Political Science, and he served as acting dean of the College of Letters & Science in 1992-93.

Young authored nearly a dozen books and edited or contributed to dozens more. Several of his books are pioneering texts and classics in the study of the African state and the politics of cultural identity.

The African Politics Conference Group named Young’s “The Postcolonial State in Africa: Fifty Years of Independence” (UW Press) the co-winner of the best 2012 book on African politics. In its award announcement, the group said, “Perhaps only Young could provide this comprehensive overview; he brings to bear some five decades of close observation of the continent into a single readable, often brilliant, analysis.”

“He was a giant in the field of the study of African politics, writing seminal books on ethnicity, the state in Africa, and the political history of the Democratic Republic of the Congo,” says Scott Straus, the Vilas Distinguished Achievement Professor of Political Science and International Studies at UW–Madison. “In many ways, he was a key founder of the study of African politics in the U.S.” 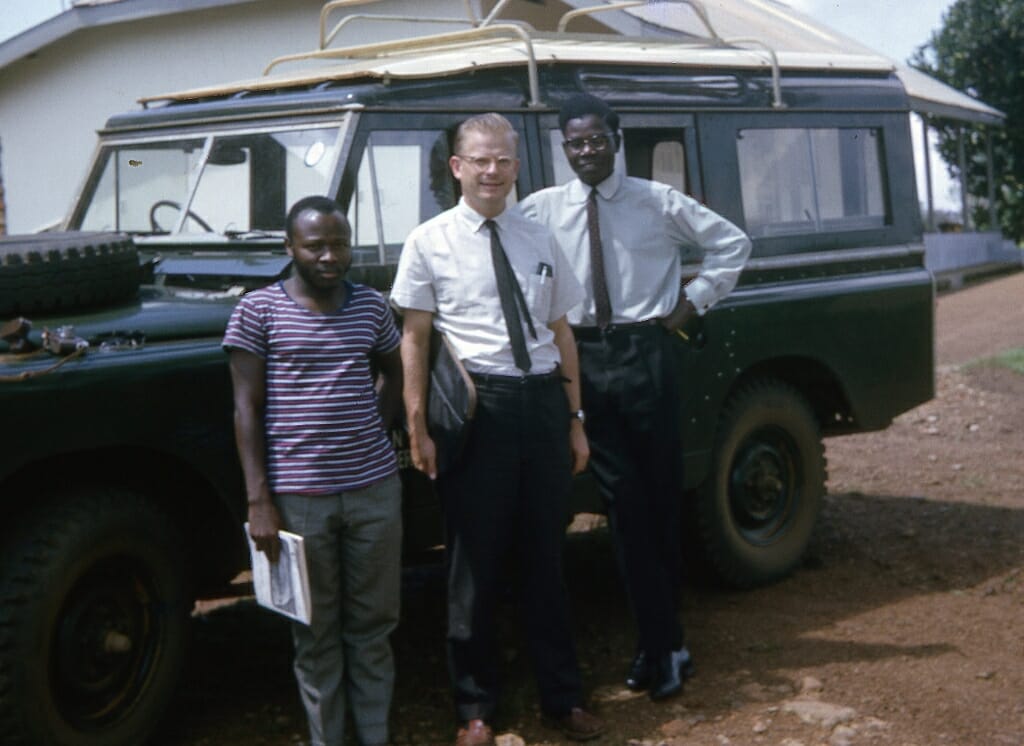 In this photo from the mid-1960s, M. Crawford Young, center, is shown at Makerere University in Kampala, Uganda, with graduate students Isaac Ojok, right, and James Katorobo. Photo courtesy of the Young family

Young’s expansive knowledge truly impressed, his colleagues say, but his impact went far beyond his academic scholarship. He was known for his encouragement, support and mentorship of generations of graduate students and young faculty members.

“I owe him so much in that regard,” Tripp says. “It meant so much to me starting out as an assistant professor that he believed in me in such a genuine way. This is an enormous loss of a man of great integrity and a kind and generous spirit.”

“I feel so lucky to have known him, to have been mentored by him, and to have been in his presence,” says Straus, a member of the African Studies Program.

Similar praise poured in from around the world on social media.

“He shaped so many graduate students at UW–Madison,” Lynda Kellam, a senior data librarian at the Cornell Institute for Social and Economic Research, posted on Twitter. “Through him I better understood the processes of development, transmission and use of culture. He was a generous soul who approached each of us as individual humans.” 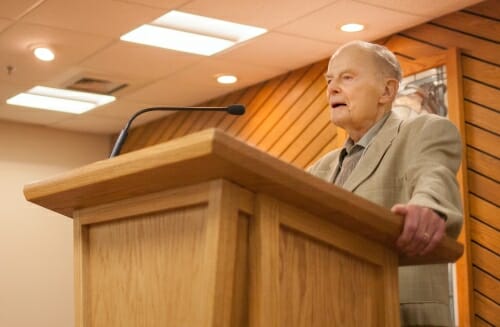 M. Crawford Young speaks last July at the launch for the book he wrote about his late wife, “Rebecca Young: A Life of Civic Engagement and Progressive Electoral Politics.” Photo: Catherine Reiland

In an email, Kellam, who earned a master’s degree in political science from UW–Madison in 2000, called Young an immensely kind man who was one of her favorite professors.

Ambassador Linda Thomas-Greenfield, who served as the U.S. assistant secretary of state for African affairs from 2013 to 2017, and who studied under Young when she earned a master’s degree in public administration from UW–Madison in 1975, said in an email that Young’s legacy is evident in “hundreds of universities across the U.S. and on the continent of Africa.”

She posted on Twitter: “Today is truly a sad day for the academic world of African Studies. We lost an icon, a remarkable academic, prolific writer, a friend and father figure for UW–Madison African Studies students from the 1960s to 2020.”

Young earned a bachelor’s degree from the University of Michigan in 1953 and a doctorate from Harvard University in 1964. He joined the faculty at UW–Madison in 1963, retiring in 2001. He served as associate dean of the Graduate School from 1968 to 1971. Several years ago, he wrote a history of the political science department that is still given to incoming graduate students.

“He was so proud of this public university and so happy and inspired to have the opportunity to help build a program here. He loved being able to embody the Wisconsin Idea through his contributions to African studies and political science at the UW.”

Among his many national and international honors, he was elected to the American Academy of Arts and Sciences in 1998, and he served as president of the African Studies Association in 1982-83. He was a visiting professor in African Studies at Makerere University in Kampala, Uganda, in 1965‑66, and served as dean of the faculty of social science at the National University of Zaire in Lubumbashi from 1973 to 1975.

Young’s final book, published last year, honors the legacy of his late wife, Rebecca Young, a seven-term state legislator who died in 2008. The couple had four children. Daughter Louise Young is a history professor at UW–Madison.

“My father instilled in me and my sisters the value of public service and of giving back to the community,” she says. “There’s a reason he stayed at UW–Madison his entire career. He was so proud of this public university and so happy and inspired to have the opportunity to help build a program here. He loved being able to embody the Wisconsin Idea through his contributions to African studies and political science at the UW.”

Visitation will be from 5 to 7 p.m. Friday, Jan. 24 at Cress Funeral Home, 3610 Speedway Road, Madison. A funeral service is planned at Cress on Saturday at 3 p.m. The family anticipates hosting a campus celebration of Young’s life at a later date. In lieu of flowers, contributions, in Young’s name, may be made to funds that support UW–Madison African Studies students. Donations can be made online through the University of Wisconsin Foundation. Donations can be mailed to: African Studies Program, 205 Ingraham Hall, 1155 Observatory Drive, Madison, WI 53706.