For millennia, people have used molten sand and other ingredients to create glass and fashion beads, vessels, lenses and windows.

These days, metallic glasses — made entirely of metal atoms — are being developed for biomedical applications such as extra-sharp surgical needles, stents, and artificial joints or implants because the alloys can be ultra-hard, extra strong, very smooth and resistant to corrosion.

While a combination of trial and error and scientific research helped refine glassmaking processes over time, controlling the creation of metallic glasses at the atomic level remains an inexact endeavor informed largely by long experience and intuition. 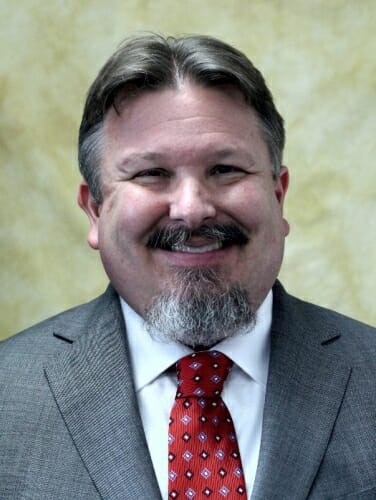 The Beckwith-Bascom Professor in materials science and engineering at the University of Wisconsin–Madison, Voyles and collaborators in Madison and at Yale University have made significant experimental strides in understanding how, when and where the constantly moving atoms in molten metal “lock” into place as the material transitions from liquid to solid glass.

They described what they observed about how those atoms rearrange at different temperatures over time today (March 19, 2018) in the journal Nature Communications. It’s knowledge that can add much-needed experimental clarity to several competing theories about how that process, called the glass transition, occurs. It also could help reduce time and costs associated with developing new metallic glass materials, and provide manufacturers greater insight into process design.

One processing challenge is that as metals transitions from molten liquid to solid, they tend to form orderly, regularly repeating atomic structures called crystals. In contrast, glass materials have a highly disordered atomic structure. And while making a high-performance metallic glass sounds as simple as preventing metal atoms from forming crystals as the material cools, in reality, it relies somewhat on the luck of the draw.

In a liquid, all of the atoms are moving past each other at all times. As a molten metal cools, and begins its transition to a solid, its atoms slow down and eventually stop moving.

It’s a complicated atomic-level dance that scientists are still unraveling. Drawing on their expertise in electron microscopy and data analysis, Voyles and his collaborators have measured how long it takes, on average, for an atom to gain or lose adjacent atoms as its environment fluctuates in the molten liquid.

“An atom is surrounded by a bunch of other atoms,” Voyles says. “At really high temperatures, they bounce around and every picosecond (one trillionth of a second), they have a new set of neighbors. As the temperature decreases, they stick with their neighbors longer and longer until they stick permanently.”

At high temperatures, the atoms all move fast. Then, as the liquid cools, they move more slowly; a simple description might be that all of the atoms slow down together, at the same rate, until they stop moving and the material becomes a solid glass.

“This is really basic science,” Voyles says. “But the ultimate potential impact for applications is if we really understand how this works at the atomic level, that gives us the opportunity to build in control that lets us make glasses out of what we want instead of only getting glasses when we get lucky.”

“We have now demonstrated experimentally that is not what happens,” says Voyles.

Rather, he says, his team’s experiments confirmed that the time it takes for atoms to lock into place varies widely — by at least an order of magnitude — from place to place inside the same liquid.

“Some nanometer-sized regions get ‘sticky’ first and hold on to their neighbors for a very long time, whereas between the sticky bits are bits that are moving much more quickly,” he says. “They continue to fluctuate 10 times faster than in the slow parts and then everything gets slower, but the sticky parts also get bigger until the sticky parts ‘win’ and the material becomes a solid.”

Now, he and his collaborators are working to understand how the atomic arrangements differ between the slow and fast parts.

“That’s the next big missing piece of the puzzle,” he says.

The advance provides valuable information about the fundamental process through which every glass material — from window glass to plastic bottles to pharmaceutical preparations and many others — transitions from liquid to solid, says Voyles.

“This is really basic science,” he says. “But the ultimate potential impact for applications is if we really understand how this works at the atomic level, that gives us the opportunity to build in control that lets us make glasses out of what we want instead of only getting glasses when we get lucky.”

Other authors on the paper include Pei Zhang and Jason Maldonis of UW–Madison, and Ze Liu and Jan Schroers of Yale University.