McGloin is retiring this summer, and she’s being honored by the Department of Asian Languages and Cultures for her contributions. 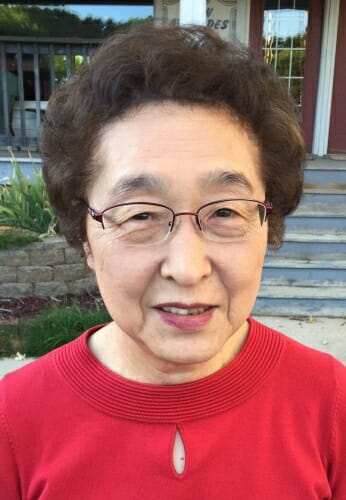 Originally from Hiroshima, Japan, McGloin pursued her undergraduate education in English at the International Christian University in Mitaka, Japan. She attended graduate school at the University of Michigan on a Barbour Scholarship, which helps female students from Asia and the Middle East study abroad.

Naomi joined UW in 1976 as a tenure-track professor.

In 1994, Naomi co-authored “An Integrated Approach to Intermediate Japanese,” which created the foundation for Japanese instruction for non-native speakers. Broadly used in the United States and Asia, this textbook made UW–Madison renowned in the field of Japanese language education.

McGloin, as president of the American Association of Teachers of Japanese, hosted the first ever American based International Conference on Japanese Language Education. This conference provided opportunities to bring scholars and educators from around the world to discuss the future of Japanese language education.

“We were trying to develop Japanese language programs at the high school level,” leading to the program at West, she says.

Junko Mori, now a UW–Madison professor of Japanese, participated as a UW–Madison student in 1989 in an internship program that placed participants in Wisconsin school districts to introduce Japanese language and culture to students K-12.

Mori found inspiration in McGloin’s status as the only female professor within her department until 1998.

“I feel like at certain moments I have to be really strong and speak up and try not to be seen as a weak Asian female and then we have to be able to assert and then share our views,” Mori says.

“I respect (McGloin) for that and how she did it — it’s truly remarkable,” Mori says.

Naomi has also spearheaded the founding of the Japanese floor in the International learning community housed in UW–Madison’s Adams Hall. Funded from the Kikkoman Foundation and the Central Japan Railway (whose chairman oat the time was a UW alum), the floor allows students living there to engage with Japanese language and culture.

“(McGloin) has influenced so many students and future teachers of Japanese who end up all over the U.S. and the world. When I’m advising students and meeting alumni now, I love hearing about their experiences taking classes with her and how she has influenced them as she did me,” says Michelle Kern Hall, a former student of McGloin and now UW–Madison’s current International Internship Program Interim Director.

“My sister and several friends majored in Japanese at other institutions and were surprised how often their professors had studied here in Madison, where we’re all from. Her influence extends so far beyond the UW–Madison campus,” Hall says.

McGloin’s passions as a language educator have pushed her to stress to students the importance of foreign language.

Along those lines, the Asian Languages and Cultures department has been meeting with the History and Education departments to discuss the globalization of the Wisconsin Idea and ways that Wisconsin students can be introduced to Asia.

The Department of Asian Languages and Cultures held a celebration for Professor McGloin on May 4.