On Saturday, Feb. 15, 2020, a rocket and spacecraft were launched from NASA’s Wallops Flight Facility in Virginia carrying tubes of bacteria and bacteriophage, the viruses that prey on bacteria. They are now on their way to the International Space Station (ISS).

Scientists in the University of Wisconsin–Madison Department of Biochemistry are hoping that by sending them into Earth’s orbit, we can learn more about how microbes respond to being in space. In preparing for a future in which long-term and commercial space travel are possible, researchers say it’s increasingly important to understand how the bacteria in and on humans — many essential for health — function in this environment, says Vatsan Raman, professor of biochemistry.

Using a protocol carefully crafted by the researchers, the astronauts on the ISS will perform a series of simple experiments to test the effects of space conditions on the microbes, such as microgravity and radiation, and on their interactions.

While bacteria and phage have been in space before because they reside on and in humans and other organisms, there haven’t been many sophisticated experiments on the effects that occur in space. The UW­–Madison team’s experiments — supported by the U.S. Defense Threat Reduction Agency (DTRA) — could be some of the most sophisticated biochemistry and microbiology work ever done in space. 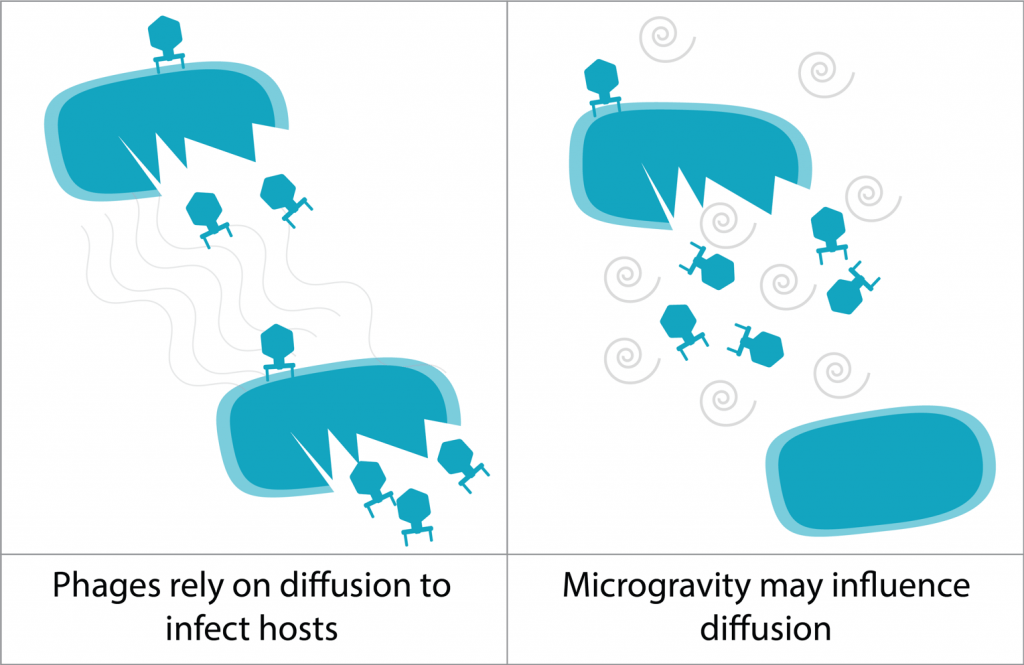 Phage don’t hunt their hosts; they simply bump into them. Researchers are hoping to learn if microgravity disrupts this process. Illustration courtesy of Raman Lab

“We are interested in the broad differences between how biology performs on Earth versus in space, and we chose to work with E. coli bacteria and the phages that infect them because they are the simplest thing to test,” Raman explains. “What’s surprising is there is not a lot of data from controlled experiments done in space that can also be replicated on Earth and allow us to do comparisons.”

The experiments will consist of exposing to the conditions of space tubes of bacteria only, phage only, and a mix of the two for different periods of time. While seemingly simple, two microbiology graduate students in the Raman Lab — Phil Huss and Chutikarn Chitboonthavisuk — worked to develop experiments that dealt with the many constraints of doing science outside of Earth.

“Every kid wants to be an astronaut, right, so sending samples into space and being at the launch is the next best thing,” Huss says. “It’s a new frontier that we know very little about, especially in terms of microbial interactions, so it’s exciting to start testing this.”

They worked to meticulously document every aspect of the testing and experiments, collaborating with a company called Rhodium Scientific that helps NASA with this kind of work. They also prepared the samples that traveled to the launch site and then into space and performed quality control tests right up until launch. 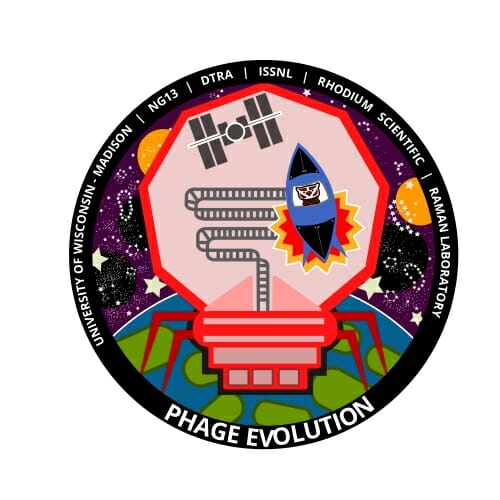 “I never thought I’d be involved in a project like this where we get to do science in space,” Chitboonthavisuk says. “It will be interesting to see the results when the microbes are exposed to factors that are not present here on Earth.”

In terms of radiation, that experienced in space is likely different than radiation experienced on Earth and hard to replicate. Biochemistry Professor Michael Cox, a collaborator on this project, studies the effects of radiation on bacterial DNA.

“We want to figure out if there’s anything different between radiation up there and radiation down here,” Cox explains. “It’s different from something like x-rays we would experience here. These are atoms traveling at pretty close to the speed of light and a lot of them are hydrogen atoms, basically called cosmic rays, and are hard to replicate on Earth.”

The radiation actually interacts with water molecules in a cell, creating what are called reactive oxygen species, which can react with proteins, DNA, and other molecules in the cell and cause damage, such as mutations. The vast majority of these mutations are either benign or deadly to a microbe. However, some of the mutations may allow them to become more resistant to radiation and thrive.

Microgravity, the weak gravity of Earth’s near-orbit, could also act as a new stress on the phage and bacteria. For phage in particular, they don’t pursue their bacterial hosts. Instead their random movements cause them to just run into bacterial cells. However, in microgravity that movement will be difficult as the phage float around.

The real work — which will utilize knowledge and techniques from the laboratories of Cox and biochemistry collaborator Michael Sussman — begins when the samples are returned to Earth. Researchers are eager to analyze different aspects of the microbes and compare the data to experiments done on Earth. Their experiments will allow them to compare how quickly or slowly the microbes grow and interact, while other tests will compare the metabolism, genetic material, and a variety of other cellular processes to see if they were affected.

By deep-sequencing the microbes’ DNA, which provides a high-resolution view of the genetic code, researchers can look for differences between those that experienced radiation and those that did not. The researchers will also use a technology called mass spectrometry, a method of finding molecular identities of proteins based on molecular weights. This will also allow them to look for modifications that possibly occurred.

While small changes in DNA or other cellular mechanics are the most likely, they wonder if the phage, in a rare example, will gain a new function. Perhaps it might be mutated in a way that allowed it to infect a wider range of E. coli than just the strain it accompanied in space. With the rise in antibiotic-resistant bacteria, researchers are turning to phage as a possible alternative to investigate.

No matter the findings, the researchers hope their experiments push the boundaries of the scientific work that is possible to execute in space. As NASA and other organizations conceive of more and more space travel, how microbes behave in this environment will become essential to understand because they play such an important role in human health.

“There is just this curious question we are trying to answer about how the microbiology we know and understand so well works in non-Earth-like conditions,” Raman says. “We expect that the lessons from this study will help us understand and design microbial communities for long term space applications.”