A $750,000 grant from the Wisconsin Economic Development Corp. announced today (Sept. 6) establishes the Forward BIO Initiative, a collaborative effort to make Wisconsin a recognized center of excellence for biomanufacturing.

The new initiative “leverages one of our key long-term strengths at UW, which is working at the crossroads where multiple disciplines connect,” UW–Madison Chancellor Rebecca Blank told state and university leaders at the MG&E Innovation Center in University Research Park. 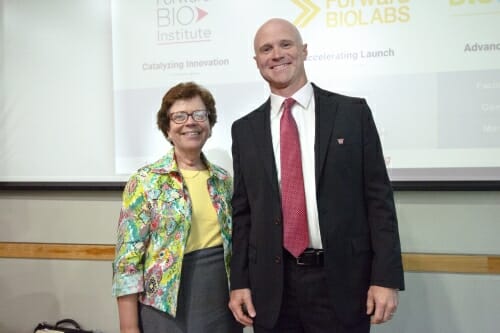 “The Forward BIO Initiative will have everything it takes to amplify the impact of Wisconsin’s innovations in biomanufacturing,” said William Murphy, a professor of biomedical engineering and orthopedics at the University of Wisconsin–Madison and a serial entrepreneur, who is chair of the Initiative.

Murphy defines biomanufacturing as “the use of advanced manufacturing approaches to create the next generation of healthcare products, such as cell therapy, engineered tissue, pharmaceuticals and medical devices.”

The Forward BIO Initiative will offer resources to efficiently translate innovations into commercial products in biomanufacturing. The Initiative comprises the Forward BIO Institute, based at UW–Madison; Forward BIOLABS, a nonprofit shared laboratory facility housed at University Research Park; and BioForward Wisconsin, which will facilitate partnerships between government, academia and private industry.

The Forward BIO Institute will catalyze innovation in biomanufacturing research, entrepreneurship and workforce development, and act as a “catapult” that pushes groundbreaking technologies into the private sector.

“Having a link to one of the premier biological research institutions definitely makes it more realistic to aim at becoming the Midwestern center for biomanufacturing. There is no other place in the Midwest with the advantages we have here.”

The institute will establish a new master’s degree program at UW–Madison in biomanufacturing innovation.

The UW–Madison School of Veterinary Medicine, College of Engineering, School of Medicine and Public Health, and the Grainger Institute for Engineering will provide support for the Forward BIO Institute, including space and funds for technology development, and three new faculty hires in advanced biomanufacturing.

“It is interdisciplinary collaboration that most pushes the frontiers of science and sparks new ideas,” Blank said.   “This is the best way to attack really complex problems, and it also happens to be a great way to create extraordinary learning opportunities for our undergraduates – the kinds of educational programs and internships that are only possible at a major research institution.”

“Forward BIO Initiative’s scope will be quite broad,” said Lisa Johnson, CEO of BioForward, “and that is part of what makes our approach unique. We want projects that address significant industry needs and have a path to broad dissemination. Whether it’s a life science product, a clinical trial or a medical device, we are interested in things that can get out to a broad patient population.”

The biomedical industry has been booming in Wisconsin, Johnson said, noting the group’s most recent study showed 36,000 employees and $27 billion in economic output in 2013.

“This initiative will streamline the process from innovation through commercialization and strengthen Madison’s biomanufacturing presence,” says Robert Drape, co-founder of Forward BIOLABS. Drape, who is executive director of WiCell, a Madison supplier of stem cells to a worldwide market, expects that the universal cells discovered in Madison 20 years ago could play a major role in projects supported by the Forward BIO Initiative.

Drape noticed the value of having lab space available on short notice at WiCell. “We kept some extra space available in case it was needed by campus investigators if a lab went down or we needed overflow space, and we had equipment in the lab that was ready to use. That space was rented to BrainXell, a UW–Madison spinoff that quickly expanded from one employee to nine, raised significant funding, and has since moved into larger quarters in University Research Park.” 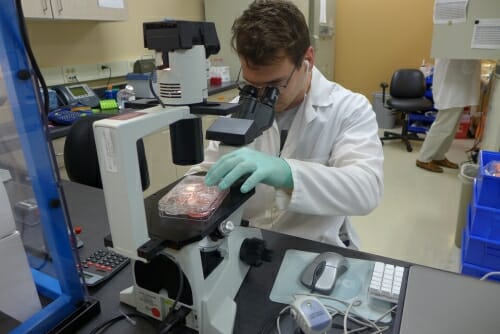 BrainXell, a UW–Madison startup that converts stem cells into a variety of nerve cells, got its start in temporary lab space at WiCell. Forward BIOLABS, one pillar of the Forward BIO Initiative, intends to make lab space available to biomanufacturing startups from its site in University Research Park. Photo by David Tenenbaum

Labs are far more difficult to establish than offices, says Drape. “There are a lot of people who have great technology and are looking to commercialize, but find it daunting to think about buying the equipment, getting it set up, verified and running.”

That process, he says can eat up hundreds of thousands of dollars and take as long as a year.

“The biological prowess of UW–Madison lends potency to the Initiative and its components,” adds Drape. “Having a link to one of the premier biological research institutions definitely makes it more realistic to aim at becoming the Midwestern center for biomanufacturing. There is no other place in the Midwest with the advantages we have here.”

“We want to define the path and provide resources that will increase the success rate for the scientific entrepreneurs in Wisconsin,” Murphy says. “Our approach is not, ‘Here’s the money, go build a lab.’ That just gets you to the starting line. Instead, we are connecting you to resources that can take a promising idea all the way to the finish line. Whether you are a biomanufacturing student, inventor, company, or supporter, we want you to become part of this initiative.” 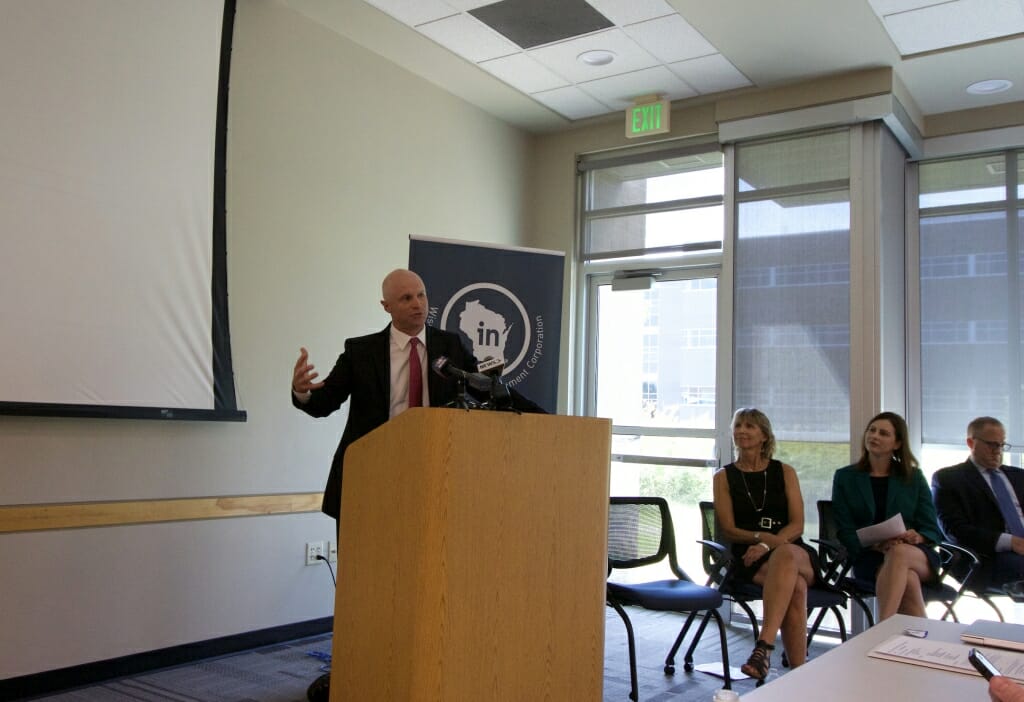 William Murphy, a professor of biomedical engineering and orthopedics, introduces the Forward BIO Initiative, a collaborative effort to make Wisconsin a recognized center of excellence for biomanufacturing. Photo by David Tenenbaum