How do you Bucky on Parade?

UW–Madison’s mascot is having a very busy summer. The Bucky on Parade project placed 85 life-size Bucky Badger statues throughout Madison and Dane County, each transformed by a local or regional artist.

The final statue (No. 85) will be unveiled Aug. 17. Dubbed “Crazylegs Bucky,” it honors Elroy “Crazylegs” Hirsch, the colorful and popular football star and former Wisconsin athletic director. It can be found at 1429 Monroe St., near Camp Randall Stadium.

The Bucky statues will be on display through Sept. 12. Judging by the crowds, they’ve been a big hit. Here’s how some kids, families and others engaged with the free public art event.

The 3-year-olds at the Red Caboose Child Care Center in Madison are known as the Bumblebee Classroom. They wear bright yellow hats on field trips, of which there have been many this summer. The children are trying to visit all 85 statues. When they spot one, as in the video above, they descend on it like a swarm of, well, bumblebees. “It’s teaching kids about being part of the community, and it’s exposing them to places that maybe they’ve never been to before,” says teacher Lisa Mitchell. The students are compiling a photo album of the statues for their classroom. 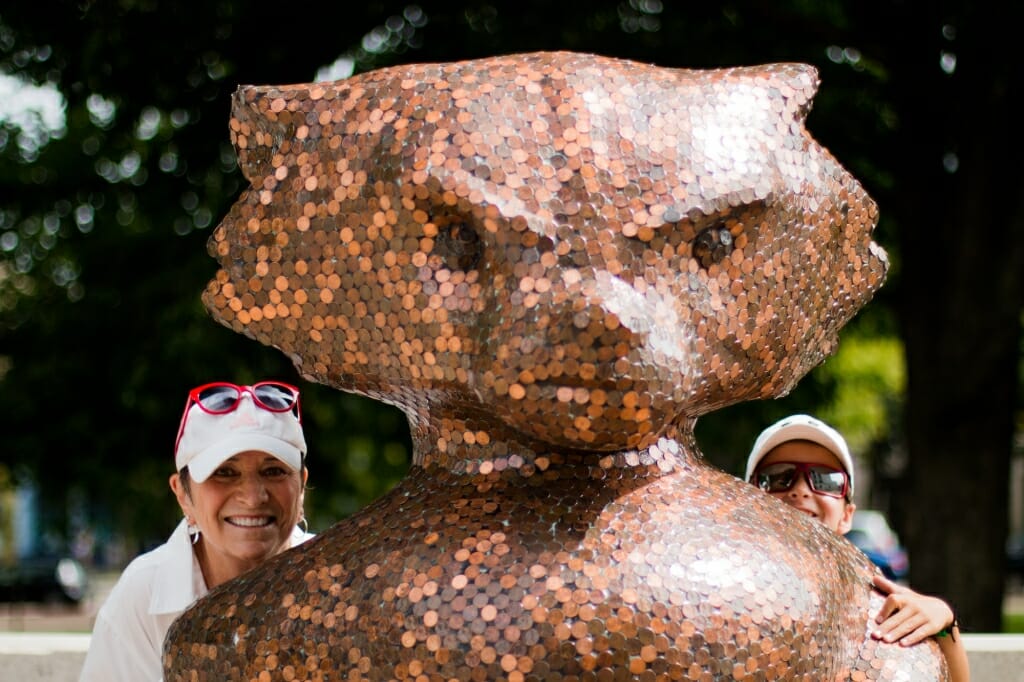 Max Goldman, 8, of Westfield, Indiana, spends a week each summer at “Camp Gramma” — his grandmother Pam Brandon’s house in Fitchburg. They love crazy adventures, so this summer it was a no-brainer how they would spend part of their time together. On one day alone, they drove almost 60 miles and walked another six to visit 38 statues. “It’s been such a truly wonderful bonding experience and so much fun,” says Gramma Brandon, 70. “Getting to see new places and wonderful sites in the greater Madison area was awesome. We made memories that will last for a very long time!” Above, the two visit “Lucky Bucky” at the Capitol. Max was carrying mini-binoculars, the better to spot a Bucky from afar. 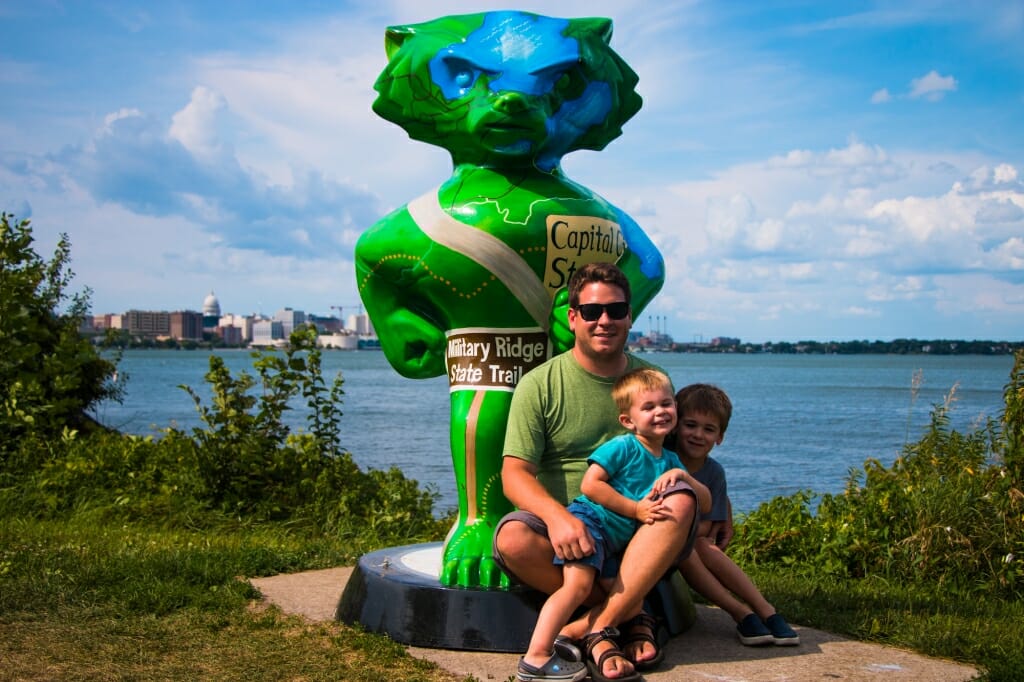 Brian Miles and his sons Edwin, 5, and Ira, 3, get up close with the “It Takes Two Wheels” Bucky in Olin Park. Photo by Beeki Gurung

Brian Miles, a teacher in the Middleton-Cross Plains School District, and his sons Edwin, 5, and Ira, 3, checked out one of the most picturesque Buckys. “It Takes Two Wheels” has a great view of Lake Monona and the Madison skyline from Olin Park. The boys hope to check off all 85 statues and enter their names in a drawing for grand prizes. They’ve already scored sunglasses, a beach ball and Bucky stickers for reaching various thresholds. 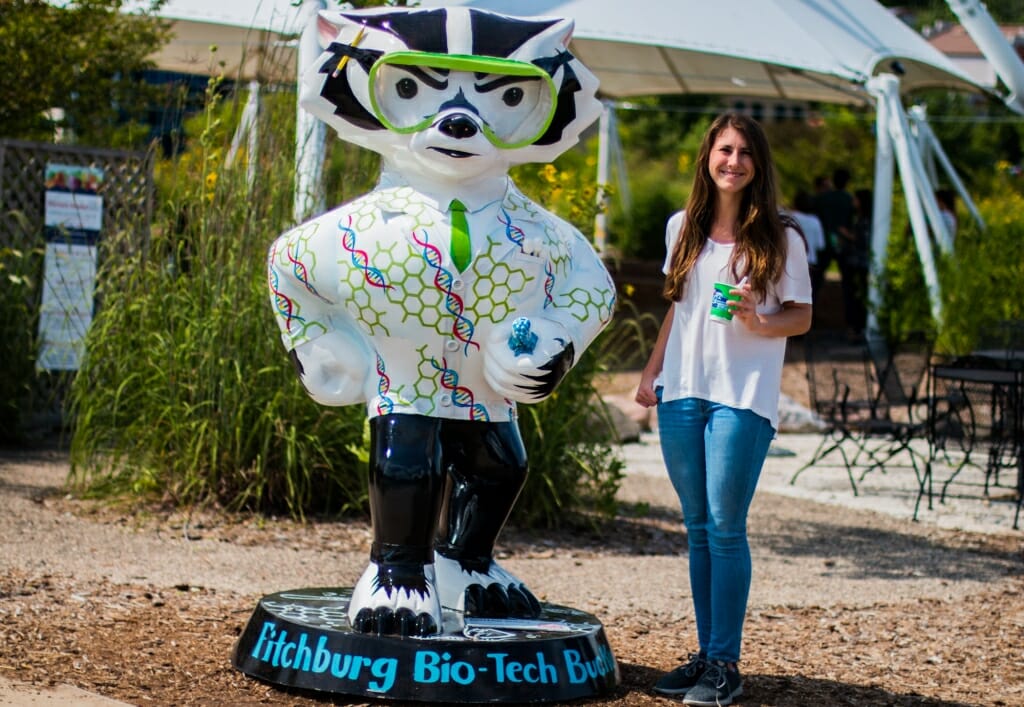 Promega Corp, a global biotechnology company, thanked its summer interns one summer day by having a Kona Ice truck pull up and offer free flavored ice near the Bucky statue by Promega’s Fitchburg campus. “Biotech Bucky” got a favorable review from intern Brooke McDonough of San Luis Obispo, California. “He’s got big ol’ goggles and pipettes in his pocket,” she said. “He really looks like he’s ready to science-up.” 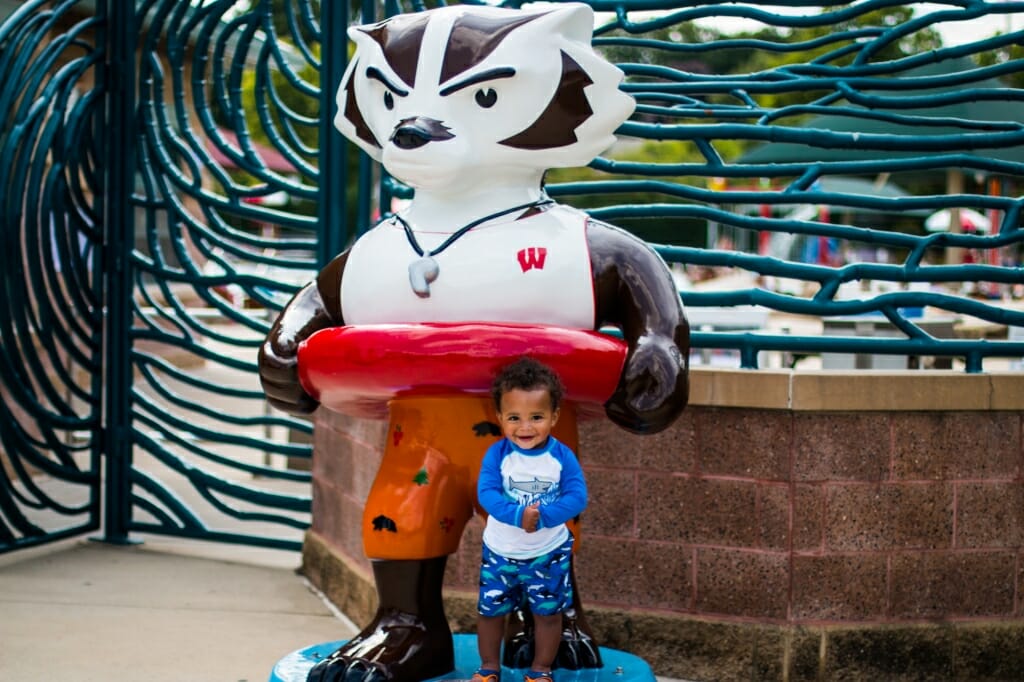 One-year-old Kingston Doe could not have been more excited about Bucky on Parade. His favorite color is red, and he can often be found decked out in a Bucky track suit or Bucky hockey jersey. It seemed especially fortunate that a statue would end up at one of his favorite places, Goodman Pool, which happens to be across the street from where he lives. “This Bucky was, of course, the first one we visited,” says his mom, Emma Gullickson.

Two Bucky statues greet visitors in the rotunda of the Wisconsin State Capitol, including “Sconnie B. Goode,” pictured in the above video. “We get thousands of visitors a week, and everybody wants their picture taken with a Bucky statue,” says tour guide Steve Urso. Santiago Marin, a math professor visiting Madison from Malaga, Spain, had never heard of Bucky and wasn’t sure what to make of the statue. “I know the Gopher in Minnesota, so is it something like that?” he asked. Yes, it is. (And ouch.)