Homecoming traditions of yesterday and today 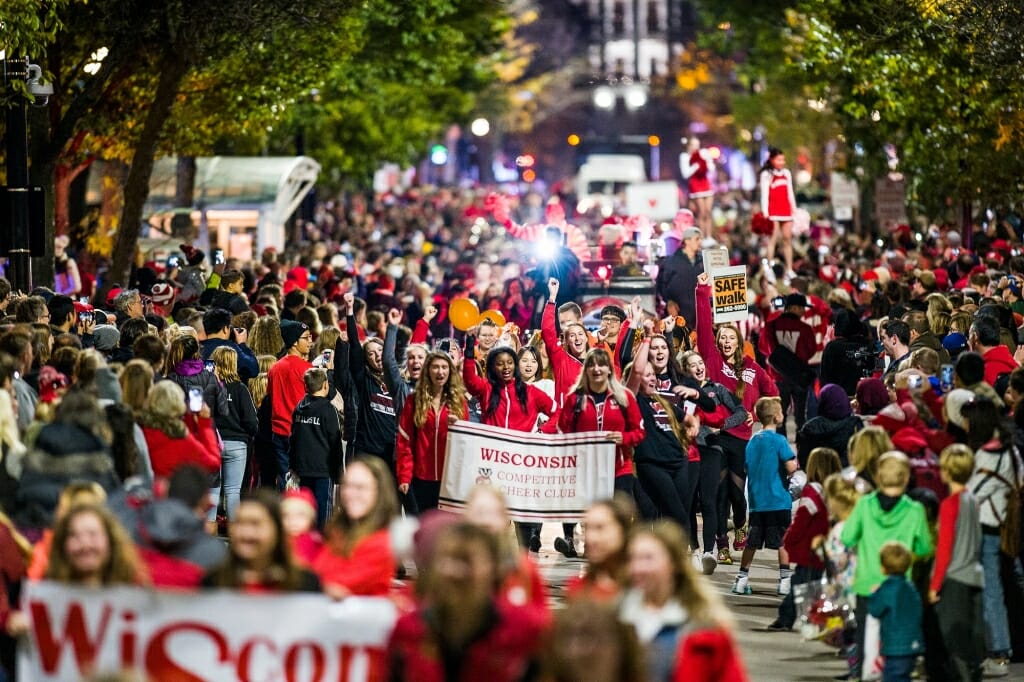 The University of Wisconsin–Madison celebrates its 108th homecoming this week, a time when alumni flock back to campus to reminisce with friends.

Some traditions, such as the homecoming parade on State Street and planting flamingoes on Bascom Hall, have a long history and are still celebrated today.

The University of Wisconsin’s homecoming did not actually begin as homecoming. Its origins actually date back to a November weekend in 1911, when 3,000 University alumni met at the Red Gymnasium to listen to prominent alumni speakers, eat donuts, drink apple cider and enjoy cigars before heading to Camp Randall to cheer on the Badgers. This event became known as “Smokes and Cigars” and was declared an “unqualified success” by the Wisconsin Alumni Magazine inn 1911, leading to this being planned again for the following year, only then it was called homecoming.

Handing out homecoming buttons is a tradition that dates back to the first “Smokes and Cider” alumni gathering in 1911, when organizers created 10-cent buttons that said, “Wallop Minnesota!” 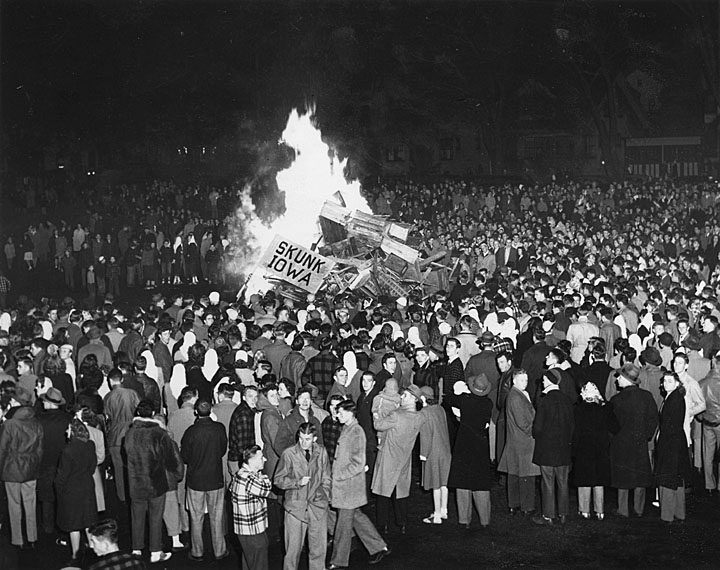 The first homecoming bonfire was held in 1912, and it quickly boomed in popularity. The event evolved into a full-blown parade down State Street with the marching band and alumni carried flaming torches. During World War II, homecoming organizers saw an opportunity to help the war effort and cancelled the bonfire in favor of a “Campus and Community Scrap Drive.” 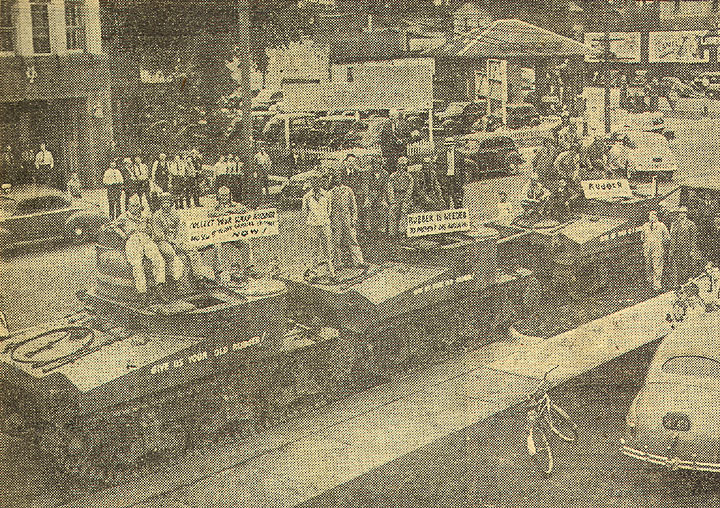 In 1942, students gave up their beloved bonfire in exchange for a campus and community scrap drive to fuel the war effort. Students were able to raise more than $1,000 towards the University’s War Memorial Fund. However, this event didn’t spur much school spirit, and as the war came to a close in 1945, so did the curtains on this event. 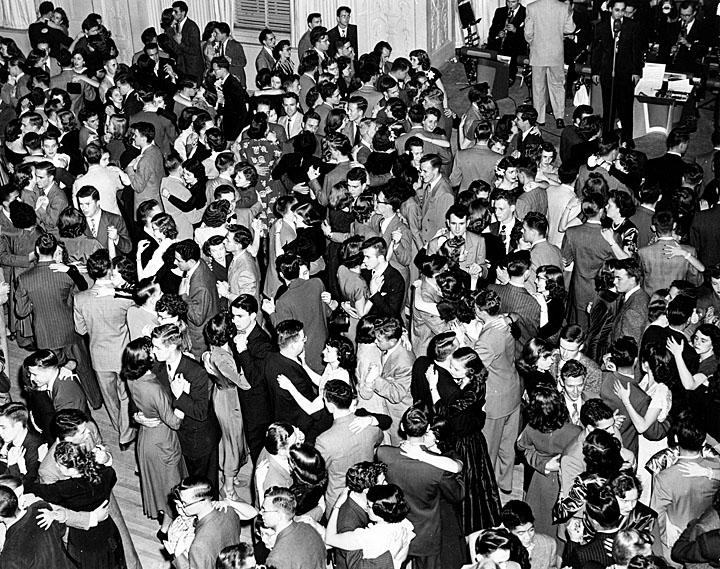 The annual homecoming ball began at the school gymnasium in 1919, and was considered by students as “an event second only to junior prom.” This event was an opportunity for students to take a date to a fun event along with their friends, but it was also an opportunity for the University to recognize outstanding members of the student body. The first Homecoming King, Hal Roberts, and Queen, Doris Burghardt, were named in 1937. Fifty-five years later, Darrell Allbritton was selected as the first African-American student to be named UW-Homecoming King, an honor that he described as an “emotional experience.” The homecoming ball ended in 2011. 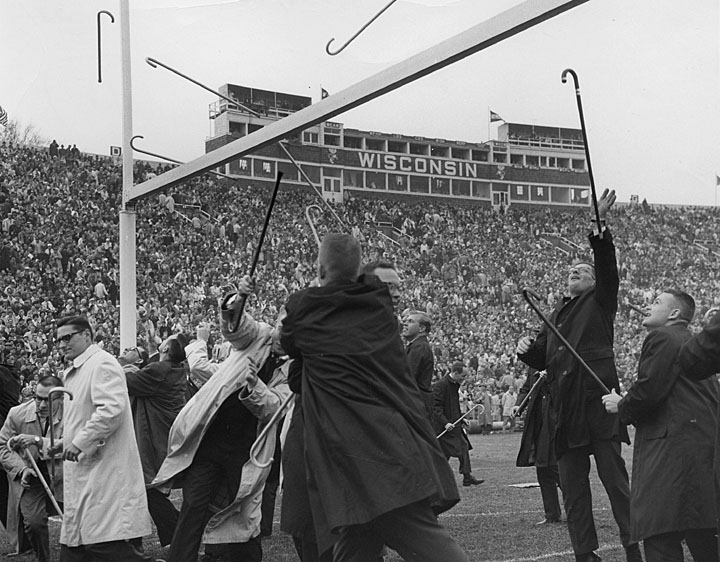 The Law School Cane Toss at the homecoming game began in 1917, in which 3rd year law students take the field at halftime of the Homecoming game and toss their canes over the goal post. It is said that those who are able to catch their canes will win their first case. Look out for this at Camp Randall this weekend, as the tradition still occurs to this day. 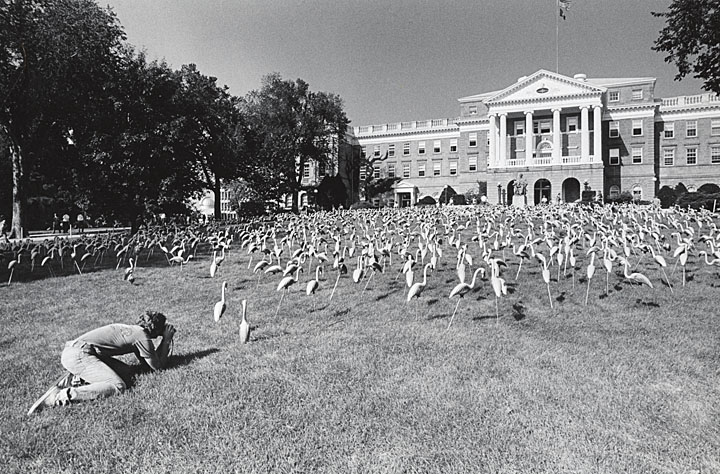 Flamingoes On the Hill

Perhaps the best-known Wisconsin homecoming tradition began in 1979, when the student Pail and Shovel Party planted plastic flamingos on Bascom Hill. This has led to flamingos becoming a symbol of Madison, even if they’re certainly not native here. Let’s hope that this tradition won’t be going anywhere anytime soon!