December’s University of Wisconsin–Madison commencement speaker hopes to knock it out of the ballpark. He certainly knows his way around one.

Allan “Bud” Selig, commissioner emeritus of Major League Baseball, will deliver the charge to graduates on Sunday, Dec. 16, at the Kohl Center.

Selig is no stranger to campus. He earned a bachelor’s degree in American institutions (political science and American history combined) in 1956 and is one of the university’s most involved and supportive alumni. Selig co-teaches the advanced level seminar “Baseball & Society Since WWII” and maintains an office in the Department of History, where he established the Allan H. Selig Chair.

“I love Madison and I love the university,” he says. “Those were four of the best years of my life. I could not be more thrilled and honored to accept this invitation.” 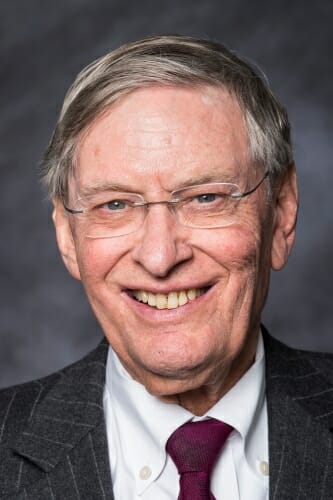 Two of his granddaughters earned degrees from UW–Madison. One is currently in graduate school on campus.

Selig, who lives in Milwaukee, founded the Milwaukee Brewers in 1970 by purchasing the bankrupt Seattle Pilots franchise and moving the team to his hometown. He owned the Brewers until becoming acting commissioner of Major League Baseball in 1992.

This has been a big year for his beloved team. The Brewers came within one game of the World Series.

“It was heartbreaking at the end, but their run was phenomenal — one of the all-time great stories,” Selig says.

Selig was named the official commissioner in 1998 and served until 2015. In total, he presided over the national pastime for more than 22 years.

During his tenure, he led the way for implementation of many of the game’s structural changes, including the introduction of the wild card and interleague play. He also introduced instant replay, the World Baseball Classic, Major League Baseball Advanced Media and the Baseball Network.

He restructured baseball’s economic landscape, which resulted in greater competitive balance among the teams and more than 22 years of labor peace.

He now serves as commissioner emeritus, a role in which he advises Commissioner Robert D. Manfred Jr. and assists him with special projects. Selig was inducted into the National Baseball Hall of Fame in 2017.

“We are so excited to have Bud Selig speak at this year’s winter commencement,” says Ronald Steinhoff, senior class president. “As the ninth commissioner of baseball, previous team owner of the Milwaukee Brewers, and fellow Badger, Mr. Selig’s legacy of ethical leadership continues to have an impact in Wisconsin and around the country. In fact, we have Mr. Selig to thank for keeping baseball in Wisconsin. We can’t wait to hear more about how Mr. Selig used the Wisconsin Idea to forever change baseball, just as each winter graduate will hope to do in their own respective field.”

Commencement speakers are selected and recommended by the senior class officers. The university covers the speaker’s travel expenses but does not pay a fee or other honorarium.

Selig has received many major honors for his accomplishments and philanthropy. In 2010, the Jackie Robinson Foundation, which aids academically distinguished students of color, presented him with its Lifetime Achievement Award. The same year, the Milwaukee Brewers unveiled a Selig statue at Miller Park, honoring his efforts for his hometown and his leadership of the Brewers and the game of baseball.

At UW–Madison, Selig has supported numerous initiatives over the decades, including helping to fund the Athletic Department’s student-athlete performance facility, home to the Bud Selig Hall of Champions welcome center. He was a 2014 Distinguished Alumni Award recipient.

More information about commencement weekend — including parking, school and college ceremonies, and answers to frequently asked questions — is available online at commencement.wisc.edu, by phone at 608-263-2400, or by email at commence@chancellor.wisc.edu.