He professes protein: Srinivasan Damodaran has thoughts for food

Protein, the same component that makes milk such a desirable food, can also spark allergies in up to five percent of children aged 6 months to five years. The bad news can arrive when the first bottle of cow’s milk triggers symptoms ranging from skin rash to life-threatening shock.

Infant formula manufacturers have neutered the threat by taking milk protein apart, leaving a bitter concoction of isolated amino acids — the building blocks of proteins. Unfortunately, the taste must be masked with sugars and flavoring, says Srinivasan Damodaran, a professor of food science in the College of Agricultural and Life Sciences at University of Wisconsin–Madison. 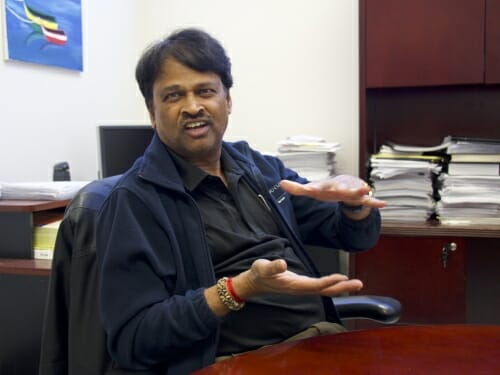 Damodaran’s latest passion is joining proteins from two different foods: getting the best of both worlds. Photo by David Tenenbaum

If you have a protein that needs a bit of self-improvement, Damodaran may be your guru. An expert in soy and milk protein, he’s invented soy-based glues and plant-based absorbents for industrial cleanups and diapers.

With John Lucey and research assistant Dani Zhu, in 2009 he patented a technique for making protein-polysaccharide complexes that allow all of the protein to stay in solution – a surprisingly difficult goal.

He’s invented an efficient way to remove phospholipids, chemicals that oxidize into an off-flavor in soy products, patented in 2011.

And then there is milk. In 2018, Damodaran disclosed a solution to milk allergy (not to be confused with lactose intolerance) to Wisconsin Alumni Research Foundation (WARF). Instead of using the present practice for evading milk-protein allergies – dicing strings of amino acids into groups of one or two — Damodaran chops them into longer strands. Though too short to be recognized by the immune system and trigger an allergic reaction, they are not bitter.

His technique relies on an enzyme used to make the artificial sweetener aspartame for the disassembly, and another food-grade enzyme to rejoin the short strings of amino acids. In some cases, the result is a unique, branched structure that makes a protein that’s even less visible to the immune system.

Milk protein contains every amino acids that people need, and Damodaran’s engineered protein, just like regular milk protein, is broken down in the small intestine into individual amino acids that move through the bloodstream, transferred inside cells, and built into human proteins.

Food chemistry was a natural interest for a man who grew up in Southern India during the 1960s and 70s. Food was scarce. “You could not buy rice in the markets, or the price was exorbitant,” he says. “I’d go to the public distribution system in the morning, and stand and wait my turn. This left an impression.”

When Damodaran came to the United States in 1976 to enter Cornell’s Ph.D. program in food chemistry, the green revolution was fueling an explosion of wheat and rice production in India.

But Damodaran has stretched beyond food, earning, with Zhu, a WARF patent in 2016 for a soy-based glue. The invention grew from a request from the U.S. Forest Products Laboratory in Madison for help developing a replacement for the urea formaldehyde glues that bond plywood, particle board, cabinets and furniture.

Over the years, the multiple health impact of airborne formaldehyde caused first California, and now the U.S. Environmental Protection Agency, to restrict this common, cheap and effective adhesive. That raised the demand for an affordable replacement that does not release toxic gases.

To meet California’s standards and further improve the glue’s environmental profile, Damodaran focused on inorganic chemistry and soon found that a chemical process called phosphorylation could improve its attachment to the cellulose in wood. “The solution was almost too easy,” Damodaran says. “It took us two or three months to demonstrate, though the optimization took much longer.”

The result was a material that was GRAS — “generally regarded as safe,” based on the ingredients’ long record of use. GRAS is a holy Grail for food and industrial products, because lack of toxicity can be assumed without expensive testing.

A California company that licensed the patent from WARF expects to start selling adhesive to panel manufacturers to replace urea formaldehyde adhesive.

To Damodaran, green glue is good, but it is a detour from his passion: sculpting proteins for human consumption. One promising approach is tying two proteins together – say a milk protein to a soy protein.

Unlike soy protein, milk protein can be whipped into appealing frothy concoctions—think whipped cream or eggnog. Some day – and there is already progress– he hopes to make a hybrid product with the best of both worlds.

The quest reverberates with the experience of a much younger Srinivasan Damodaran, waiting in line to get food for the family. “Soy is very cheap,” he says, “and if we create a new ingredient, the per unit mass price will be lower, which would enhance the availability of protein. Only 5 percent of soy protein is used in human food; the remainder is fed to cattle. Maybe we can change that.”