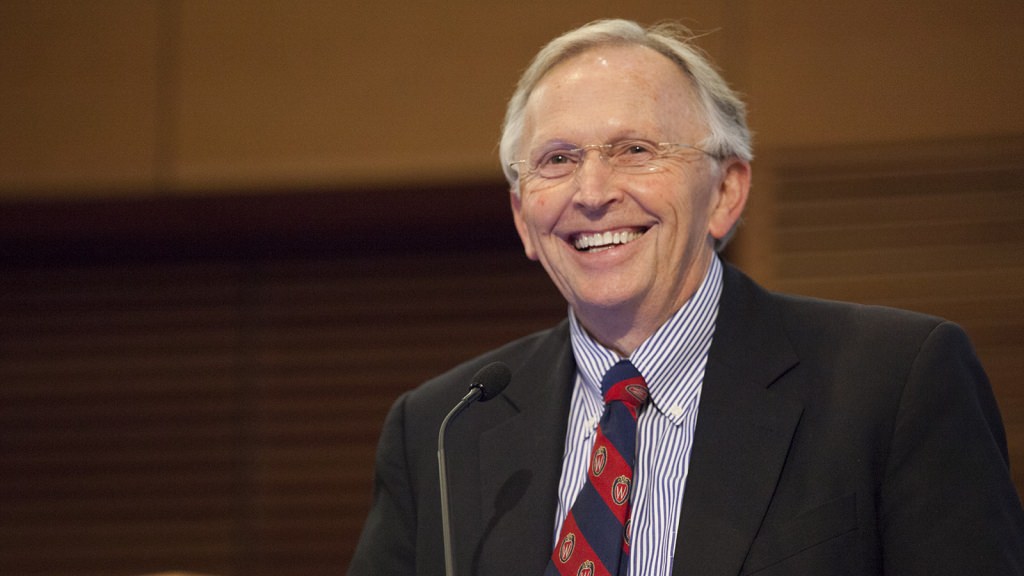 Carl Gulbrandsen at the Wisconsin Science Festival in 2012. Photo: WARF

Carl Gulbrandsen will retire June 30 after 16 years as managing director of the Wisconsin Alumni Research Foundation (WARF), the independent, nonprofit foundation that aids scientific research and education at UW–Madison.

WARF is a major driver of innovation and economic development in Wisconsin, applying for patents on discoveries of UW–Madison faculty and staff and then licensing the patents. Currently the foundation manages more than 1,700 patents based on UW–Madison discoveries. 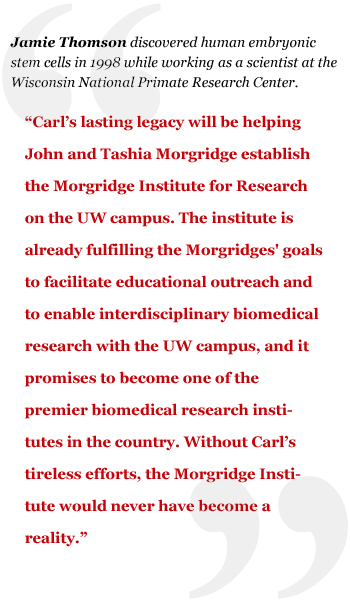 A percentage of the licensing revenues is shared with the inventors and the balance becomes part of WARF’s investment portfolio, which currently totals $2.6 billion. The foundation provides annual grants ($92.5 million in fiscal year 2015-16) to campus and affiliated organizations.

To pay tribute to Gulbrandsen’s service, the WARF board of directors has created a chair in early childhood education named for him and his wife, Mary, in the School of Education.

A native of Viroqua, Wisconsin, Gulbrandsen has a Ph.D. in physiology and a law degree, both from UW–Madison. He spoke recently with University Communications about some of the highlights of his work with the foundation. Our conversation has been edited for brevity and clarity.

Q:You became managing director in 2000, just two years after Jamie Thomson cultured human embryonic stem cells and unleashed a scientific revolution. What did you learn from that experience? 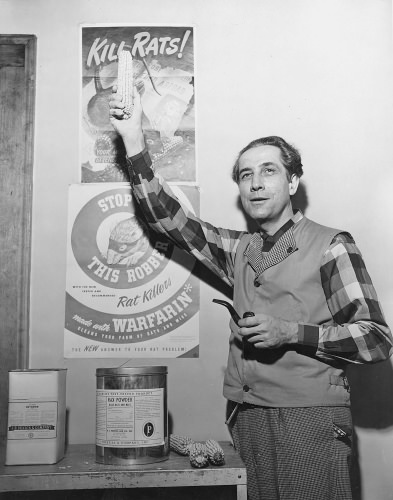 A:Certainly we learned a lot, but the world gained a lot too. At the end of the day it is clear WARF accelerated stem cell research in very important ways. We helped establish WiCell, which is the gold standard for banking and distributing stem cells. We trained more than 800 researchers to use human embryonic stem cells. WiCell distributed cells to 2,285 labs in 42 countries and is still distributing cells. We increased the knowledge base that is helping scientists worldwide understand human disease. WARF played a critical role in making that possible. Jamie was right: This is one of the most important research tools in a generation. Today, WiCell is here, Jamie is here, and the corporation he started with his colleagues, Cellular Dynamics Inc., remains in Madison even though it was sold last year. Stem cells have been a boon to UW–Madison and to Wisconsin, and increasingly to human health.

Q:In October 2015, WARF won a lawsuit against Apple Computer. The federal judge ruled that chips in iPhones and iPads infringed a patent from Gurindar Sohi, a UW–Madison professor of computer science. What made you confident you would prevail? 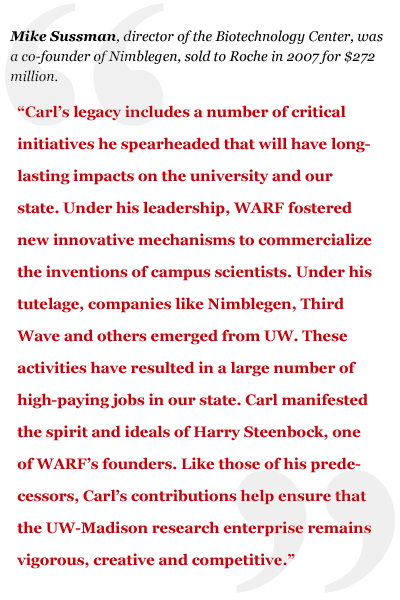 A:Our role is to protect intellectual property created at this great university and to help ensure that the benefits are returned to the university. That’s what we did with the Apple lawsuit. We knew the Sohi group’s invention was groundbreaking and important. We believed Apple was using that technology in some of its products and asserted the patent to address Apple’s unauthorized use. We had a great team of lawyers, a terrific team of scientists and a really strong patent which we had asserted previously against Intel in 2008. That case settled just before trial but the Apple case did go all the way to trial. In October, the jury in federal court in Madison awarded WARF a $234 million judgment. Not surprisingly, Apple has indicated they will appeal.

Q:Entrepreneurship has never been more trendy. Does this make WARF’s job easier? 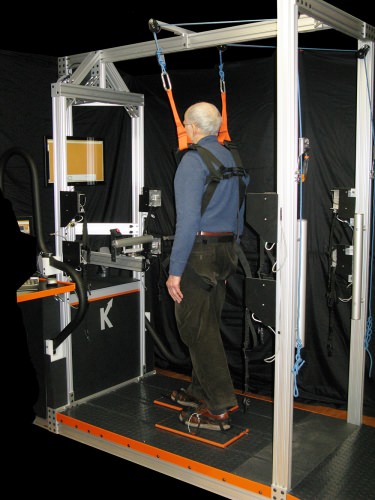 KIINCE is developing a technology patented by WARF to rehabilitate movement by stroke patients. Photo: KIINCE

A:Starting a business is fun and exciting and WARF helps fund a number of initiatives, including Discovery to Product (D2P), to help faculty, staff and students evaluate start up opportunities. But we need to remember that not many startups succeed. Undergrads are here to get an education, so we should not encourage them to leave the university prematurely. It’s similar for faculty; they are critical to the success of the company and we certainly want their scientific input for the company, but we also want them to stay, teach and do research. Entrepreneurship may be most appropriate for the grad students and postdocs who are looking for avenues of employment outside of academia or research.

Q:Over the past decade, WARF has been actively investing in startups from the university. Why? 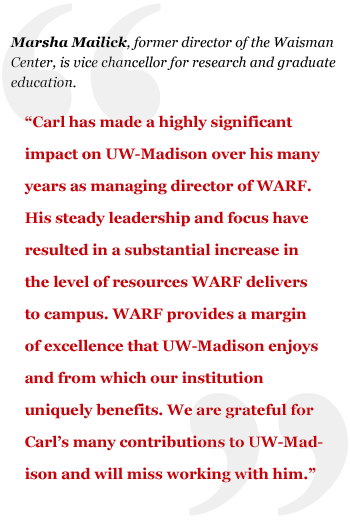 A:These investments are to some extent a survival issue for WARF. A principal purpose of WARF is to help move technology arising from research at UW–Madison to the market to improve lives. Many companies today are unwilling to invest in very early stage technology. They want somebody else to take the development risks. That “somebody” often is a startup company. When WARF started investing in startups, there was this attitude that our presence did not add value to these startups. It’s the opposite today. Entrepreneurs say “We really need you, because you bring credibility to the company.”

Q:From the viewpoint of technology transfer, how else has the university’s role changed? 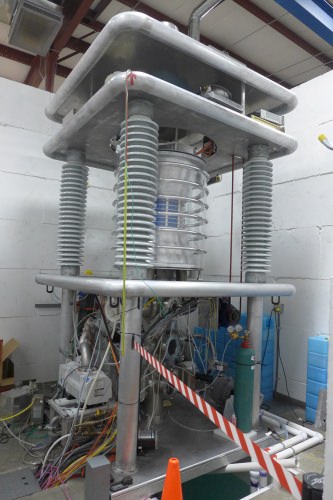 SHINE Medical Technologies of Madison will use neutron generators like this one, built under license from WARF, to produce tracers and elements for medical and cancer treatment at a plant SHINE is building in Janesville. Photo: David Tenenbaum, University Communications

A:Changes in patent law, enacted in 2011, gives priority to the “first inventor to file,” not the first to invent, and that changes the dynamic at universities. Under the prior law, we had a strong grace period which allowed us to obtain a patent even if it was filed up to a year after first public disclosure. Universities are very open places, where people are driven to publish and to share ideas, and it should be that way. But “first to file” requires that we act more quickly to protect the great ideas that come from the university before publication or public disclosure and that interferes with the openness that science requires. This means we have to work harder at WARF to make certain patent applications are filed quickly before publication. It is not our policy ever to delay publication of research. This country can’t cut funding to the universities if it expects to remain competitive, and the notion that universities should focus on applied research is self-defeating. The great technologies have arisen from basic research at universities. The global economic strength of this country rests on an enormous investment in basic research, and nobody should forget that.

Q:WARF made a big investment into the Wisconsin Institutes for Discovery. How’s it going?

A:We’re moving into the sixth year of building occupancy. Some initially were concerned that the investment was a diversion of resources, but today the university loves the building, and makes use of the Town Center for great events almost every day of the week. There are great scientists in the two institutes, and from our vantage point they are both hitting on all cylinders. The Morgridge Institute is private – there are no university or state funds involved. The university and state still gain mightily though as the premier scientists who work there are also professors at UW–Madison, with Morgridge paying their salaries. There will be home-run discoveries out of the Morgridge Institute and the Wisconsin Institute for Discovery, without a doubt, but these things take a long time to germinate, and five years is too soon to pass judgment. 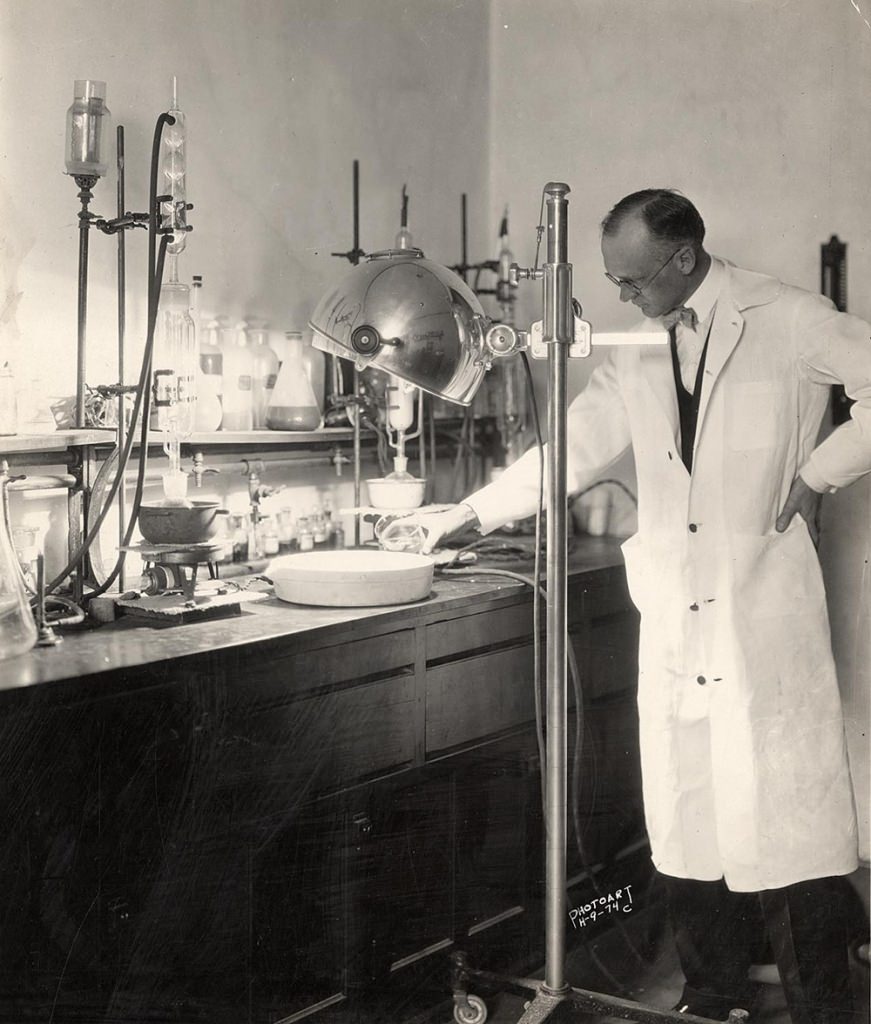 Professor Harry Steenbock invented a process to irradiate milk to form vitamin D, which helped to cure rickets and inspired Steenbock and others at UW–Madison to establish WARF. Photo: UW-Madison Digital Collections

A:There honestly isn’t another organization exactly like WARF in the world, and it took me a long time to understand just how unique and special the relationship between WARF and UW–Madison is. People ask how to create a WARF at their university. I used to give a flip answer: Get started 90 years ago with a very important invention like Harry Steenbock’s discovery of how to make vitamin D in milk and defeat rickets, invest after the Depression, and serve a world-class research university. But today if you went to a university and said, “Trust us, we are going to make a lot of money and return it to you,” they would not trust you. I can name half a dozen universities that had inventions worth hundreds of millions that collected the royalties, spent them and have nothing left. We have been around 90 years, we have given $2 billion in current dollars to the university, have a $2.6 billion endowment, and will continue to give to the university in future generations.

WARF saves taxpayers a lot of money, but WARF only succeeds if UW–Madison succeeds, and it does not seem to be asking a lot to ask the state to invest in a university that is a working enterprise – a great economic engine. UW–Madison and WARF benefit the state and the entire world, and that’s something the state should be proud of. 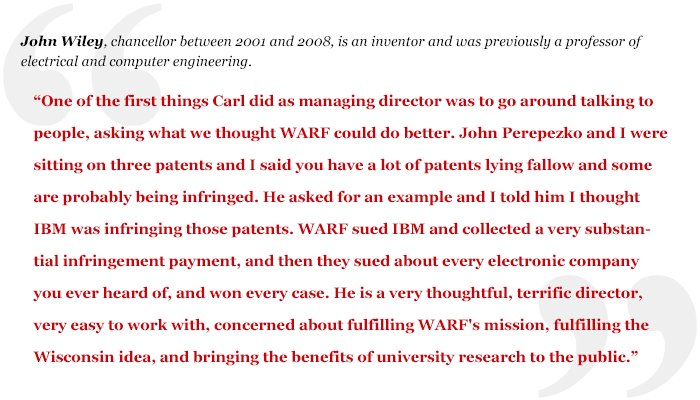 Q:What has it been like to lead one of the nation’s premier technology transfer offices?

A:It has been a joy. WARF is a very special place as is UW–Madison. But it is important to understand that WARF is much more than technology transfer. WARF invests in research that makes a difference to us all. Our mission is to promote, encourage and aid scientific investigation and research at UW and Morgridge Institute. The investments that WARF has made over 90 years have improved the lives of people across our state, our nation and the world. So, yes, having the privilege of leading an organization like this has been remarkable. 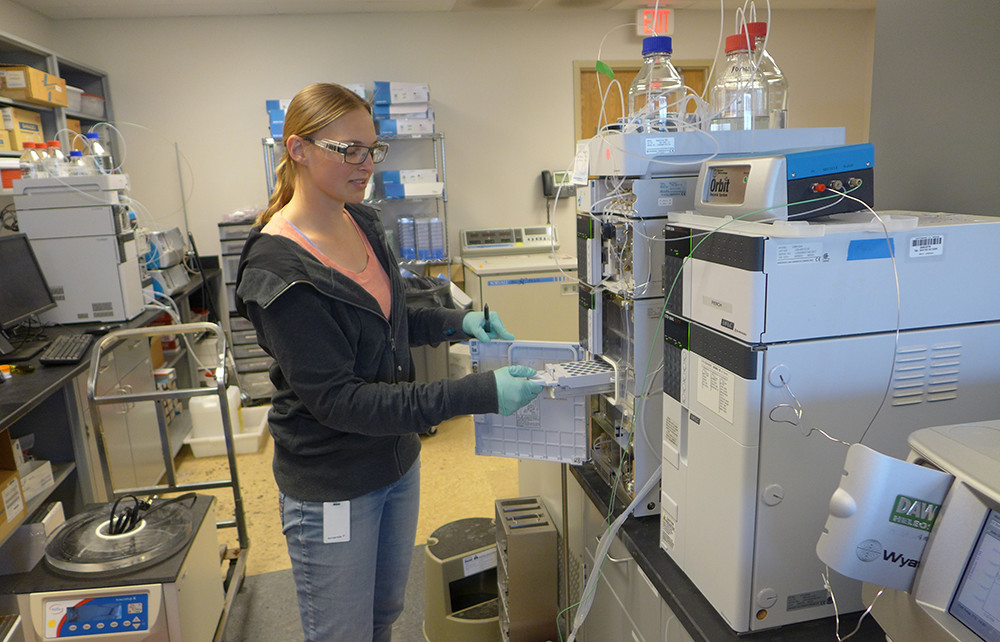 Q:What’s next for you?

A:Colorado. My wife, Mary, and I will spend a week out there with our family to decompress. We’re heading to Barcelona for a week in July. Erik Iverson, the new managing director, is terrific and will be great for WARF and UW–Madison. If I can do anything to help him, I will. I may do some consulting and volunteer at local nonprofits focused on public service. I’ve been told not to make any snap decisions, and I’ll heed that advice. But I will always be cheering for WARF and UW–Madison.

DOWNLOAD PHOTO: A high-resolution photo to accompany this release is available at UW-Madison News