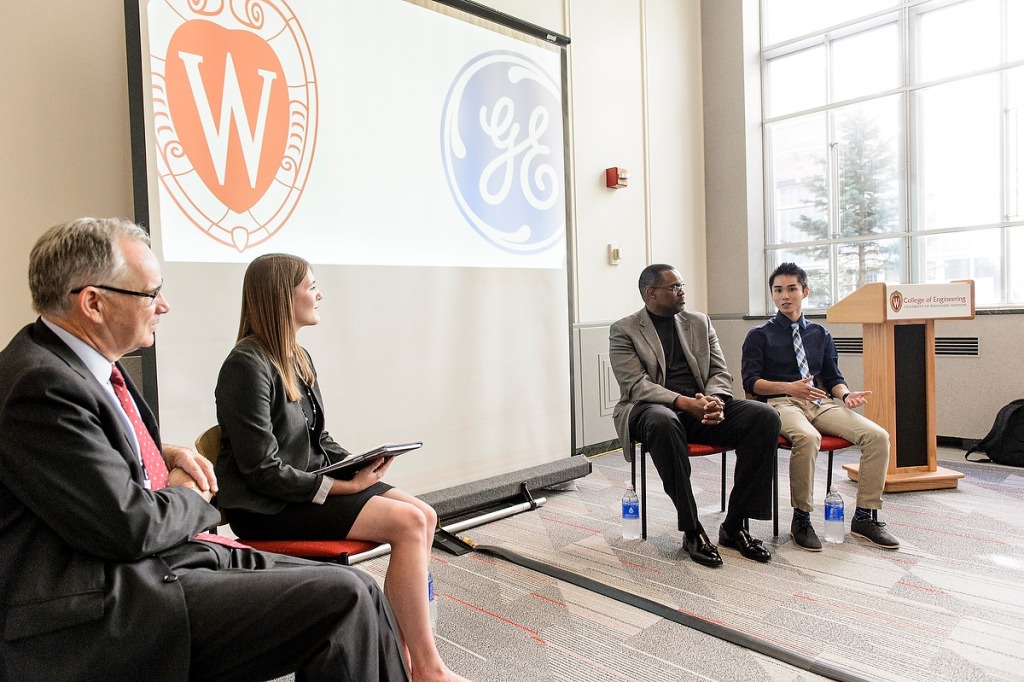 After all, it was the senior biomedical engineering student who drew leaders from international industrial giant GE to the University of Wisconsin–Madison campus Monday bearing awards and scholarship money.

Nguyen, a Waukesha native, won GE’s Unimpossible Missions: The University Edition contest, by designing a way to prove a popular idiom — “You can’t un-ring a bell,” in his case — wrong using the company’s technology. 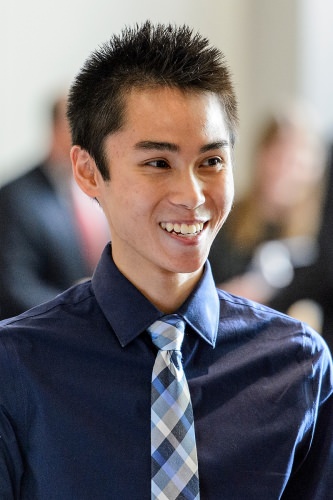 Chris Nguyen will receive a scholarship of up to $100,000 and a 10-week paid internship. Photo: Bryce Richter

“You did a fantastic job,” Mike Barber, president and CEO of GE Healthcare Molecular Imaging and Computed Tomography, told Nguyen Monday in an Engineering Hall ceremony. “We’re looking forward to seeing you at GRC next summer.”

That would be the Global Research Center in Niskayuna, New York — the 116-year-old facility where GE engineers created equipment for the first radio and television broadcasts.

On top of a $100,000 scholarship, Nguyen’s win secured a 10-week internship at GRC in 2017. He visited this summer to tour and talk through his Unimpossible Mission entry, and came away awed by the breadth of technology GE researchers work on, and the boundaries they get to push.

“While I was there, I met an engineer from Madison working on tiny robots that go into jet engines and fix them, so you don’t have to take the engine apart,” Nguyen told the crowd Monday. “Now I’m thinking about miniaturized electronics, maybe for health care. But I’m open to anything, and working on any project at GRC would be amazing.”

GE employs about 750 UW–Madison alums around the world, according to Nicole Rybeck, GE campus recruiting leader (and a 2009 UW–Madison engineering grad), and has partnered with the university on projects and development of talented engineers for more than three decades. The Waukesha-based GE Healthcare unit, in particular, has translated a number of Madison accomplishments for clinical use.

“Some of the innovations we’ve brought to bear for patients around the world — MR, CT technology — have their roots here at UW,” said Barber, who fielded questions on innovation and transformative technology Monday with Nguyen and Ian Robertson, dean of the UW–Madison College of Engineering. “Our ability to integrate the work of the world’s leading researchers is what interests me, and keeps us all alive and fresh.” 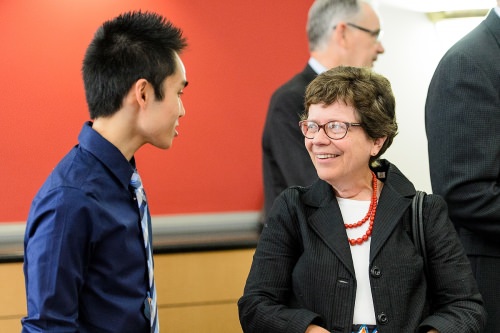 For the Unimpossible Mission contest, Nguyen theorized that he could use foam to isolate the ringing of a one-ton bell and eliminate unwanted echo. From there, he proposed using a microphone and GE’s subsea acoustics system to analyze the exact frequency and amplitude of the bell. Finally, he’ll produce the exact same sound in inverse phase — thereby creating destructive interference. The interfering sound will play over speakers, resulting in noise cancellation of both the bell and the interference, and creating absolute silence.

“Our students are problem-solvers. The education they receive here emphasizes creativity and innovation,” Blank said. “They go into the world with skills they need to solve problems none of us ever really know exist yet. Our industry partners like GE expand and enhance the educational opportunities we provide”

Robertson said Nguyen was emblematic of the college’s maker mindset.

“We encourage our students to ask why and how,” Robertson said. “How can I accomplish this? How can I improve that?”

On top of the work Nguyen has done as a student — including his role on a team that designed a centrifuge that helps return more blood to patients during surgery — Robertson lauded the undergrad’s time as a residence hall house fellow and counselor at Camp Badger, keeping groups of visiting teenagers on task and interested in science.

“I think all of these skills make Chris a more versatile, well-rounded engineer. And they demonstrate what a remarkable individual he is, and what a valuable asset he is to our college and the UW–Madison community.”