From Helsinki to Minneapolis to Madison, scientist gives back in Madagascar 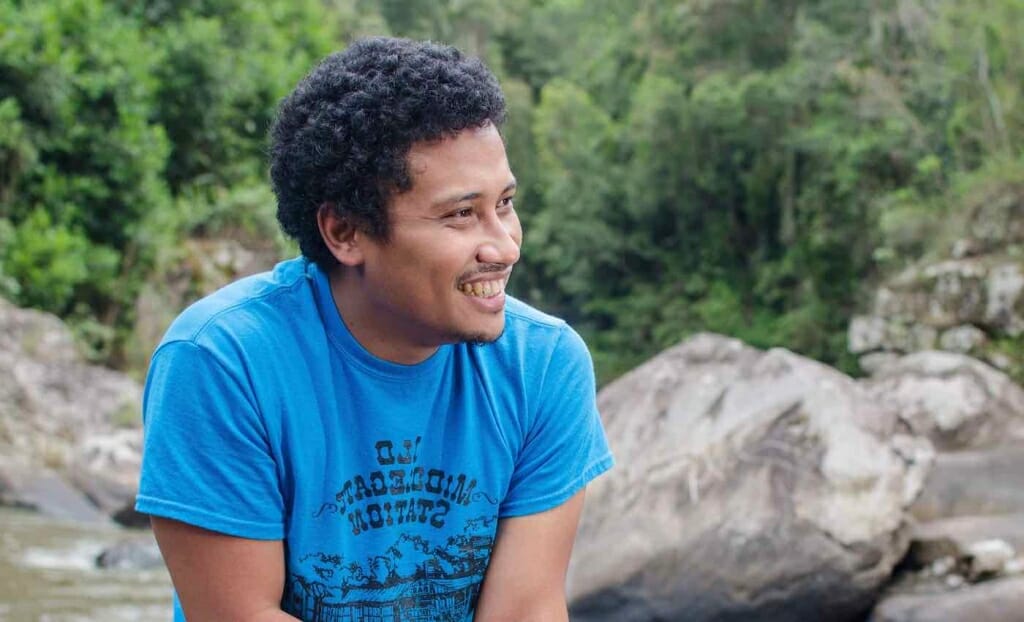 “Although I am at an early stage of my career, my goal is to have solid scientific evidence (on which) to base policies in Madagascar, which includes understanding deforestation, climate change, evaluating societal impacts, and ultimately, combating the rampant poverty,” Tanjona Ramiadantsoa says. Courtesy of Tanjona Ramiadantsoa

Growing up in Madagascar, Tanjona Ramiadantsoa was reluctant to invite friends from school over to his house.

“They were rich kids, and we used toilets shared by 20 people,” says Ramiadantsoa. Even though his mother never received a formal education, and his father stopped attending before high school, Ramiadantsoa attended a private Catholic school at his parents’ insistence. They told him education was the ticket to a better life.

Today, Ramiadantsoa is a theoretical ecologist who recently departed Madison, Wisconsin, to return to his home country. His goal: To help show students growing up like he did that they, too, can pursue careers in math and science.

“I am the only theoretical ecologist in Madagascar and we need those skills in my country,” he says. “That’s why I am doing it … I am showing underprivileged kids that if you work hard enough and study hard enough, you can improve your life.” 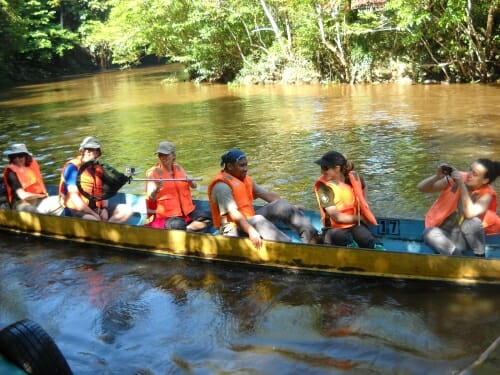 Tanjona Ramiadantsoa (center with bandana), canoeing to a field site with his PhD advisor, Ikkla Hanski at the University of Helsinki, in 2013. They were in Gunung Mulu National Park on the Malaysian side of Borneo. Photo by Swee Wong.

Ramiadantsoa just completed several years of postdoctoral study at the University of Wisconsin–Madison, and, as a theoretical ecologist, he uses mathematics to understand and address ecological problems. He hopes to share this with students, too.

As part of the UW–Madison research team for the UW2020-funded initiative Abrupt Changes in Ecological Systems (ACES), Ramiadantsoa studied the decline of eastern Hemlock forests. He helped build computational models to understand how different kinds of trees respond to shifting wildfires in Yellowstone National Park. He examined county-level trends in wheat and corn production in Wisconsin. And he developed a new framework for building ecological models. 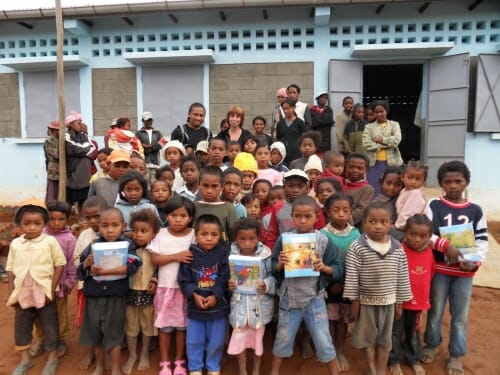 “The variety of systems that Tanjona has worked in, and his broad interests, have infused new ideas in our discussions and within our group,” says one of his former ACES advisors, Monica Turner, professor of integrative biology at UW–Madison. She notes that Ramiadantsoa also audited every course she and his other ACES advisors taught, enriching class discussions. “His motivation was that he wanted to gain as much as possible from his time at UW–Madison, in part so that he could bring that knowledge back to Madagascar.”

Madagascar is one of the most biodiverse nations in the world, home to hundreds of plant and animal species found nowhere else on the planet, such as the silky sifaka lemur and the ploughshare tortoise.

An island off the eastern coast of Africa, Madagascar is also among the world’s poorest countries. An estimated eight in 10 people live below the poverty line. Just 13 percent of people have access to electricity. Only four other nations have fewer children not attending school. Once colonized by France, Madagascar gained independence in 1960 but has for decades experienced political instability and violence. Rampant trafficking and deforestation threaten the nation’s wildlife. 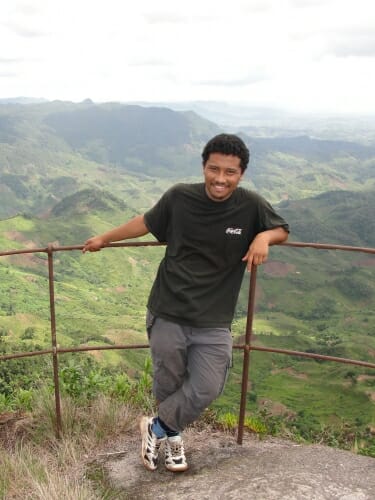 Ramiadantsoa hopes to improve the capacity of people in his own country to address the challenges they face, to rely less on foreign assistance, and to help ensure local funds are used to address local problems.

“Although I am at an early stage of my career, my goal is to have solid scientific evidence (on which) to base policies in Madagascar, which includes understanding deforestation, climate change, evaluating societal impacts, and ultimately, combating the rampant poverty,” he says.

At UW–Madison, the notion of sharing knowledge with society is known as the Wisconsin Idea, and it’s a concept that resonated with Ramiadantsoa, now an honorary fellow of the university.

“First, the value of education per se, in a developing country like Madagascar, can be the gate to a better life … my parents understood that early and bet on educating my sister (a gynecologist) and myself,” he says. “I appreciate that Wisconsin puts forward the importance of education itself.”

“Second,” Ramiadantsoa adds, “that education and research is not an end to itself but should benefit society. I have aimed to indirectly and directly propagate that message and having the support of my advisors and the university is essential.” 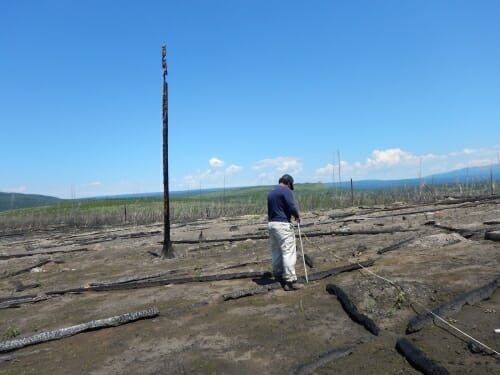 Tanjona Ramiadantsoa takes measurements while conducting post-wildfire fieldwork at Yellowstone National Park with one of his UW–Madison advisors, Integrative Biology Professor Monica Turner, and members of her research team. Photo by Monica Turner

Ramiadantsoa was six years old when he decided he wanted to study math. Solving problems seemed natural to him.

After high school, he studied math at the University of Antananarivo in Madagascar, and looked for opportunities to combine that with ecology. In his third year, he learned about a study abroad experience based in Madagascar’s rainforests and offered through Stony Brook University in New York. Despite the risk that he would fail his critical university exams if he attended the three-month program, he decided to go for it.

In the program, he used mathematics to develop a model that showed that the deforestation practices being used in the rainforests at the time were unsustainable.

“That was my passport abroad,” he says. 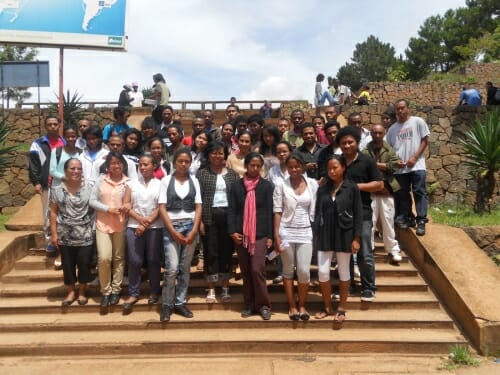 In 2014, Tanjona Ramiadantsoa organized a two-day workshop at the University of Antananarivo to introduce mathematical ecology to biologists, ecologists, mathematicians, and physicists. The goal was to put these fields together to allow them to collaborate and begin to help build more scientific capacity in Madagascar. Photo by Tanjona Ramiadantsoa

While in the U.S., he met Cara Brook, a fellow scientist now at UC Berkeley who shared his interest in improving circumstances for Malagasy students. Together, they created a short-but-intensive workshop in quantitative biology for graduate students in Madagascar, called E2M2: Ecological and Epidemiological Modeling in Madagascar, which they’ve hosted annually since 2017.

He gave back throughout his time in Madison, says another of his ACES advisors, Integrative Biology Professor Tony Ives.

He spent time “mentoring undergraduate and graduate students in Madagascar by email and Skype, encouraging those who he thinks have good chances at successful careers,” Ives says.  “He could have pursued an independent career as a theoretical ecologist, leaving Madagascar behind. He certainly has the potential to have a successful career in North America or Europe. But he has always focused on Madagascar.”

And though for Ramiadantsoa this has created some challenges, living between two worlds and choosing between seemingly disparate futures, he is back in his country, hoping to do more.

“I now have enough credibility to give me more leverage to make changes in Madagascar,” he says.

He plans to help host the E2M2 workshop again in 2020, to advocate for more Malagasy women in science, and to spend time visiting high schools throughout Madagascar.

“When I go to these schools, I tell them what’s possible,” Ramiadantsoa says. “I come from the hardest background and I’m succeeding now, I work with some of the best researchers in the world. If I can motivate a few people maybe it will propagate. If I’m a poor Malagasy student, why would I do it?”