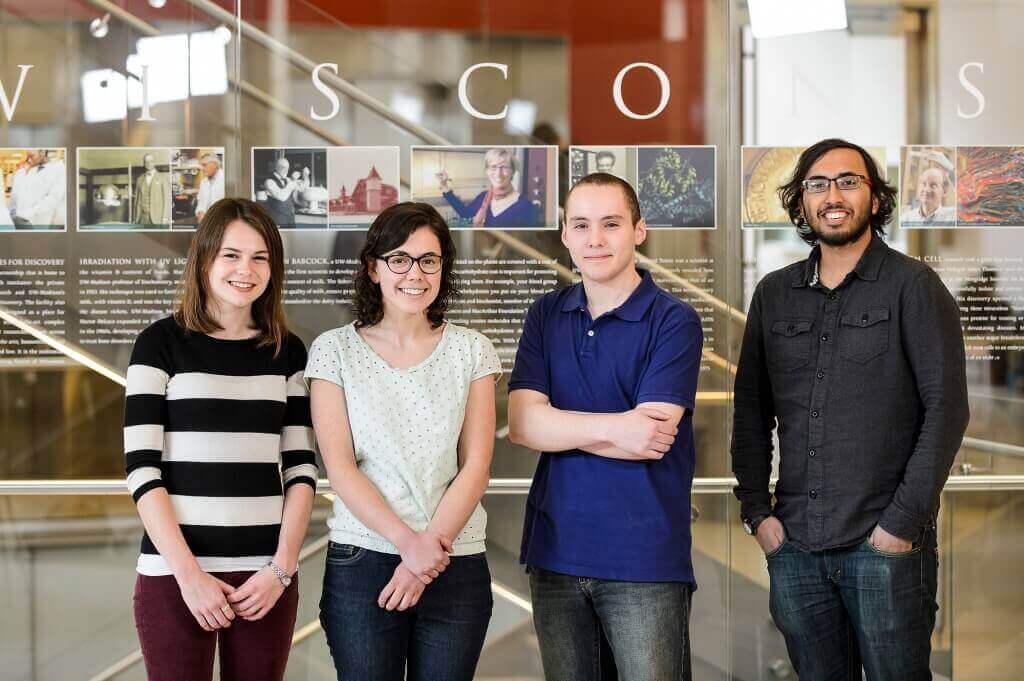 Four students at the University of Wisconsin–Madison will receive the Barry M. Goldwater Scholarship for undergraduate excellence in the sciences.

Out of the 1,150 nominations received in 2016, 252 scholars were named nationwide. All four of UW–Madison’s nominees received the award.

The 2016 Goldwater Scholars representing UW–Madison are:

Idris Boukahil, a sophomore from Madison majoring in applied mathematics, engineering, and physics (AMEP) and physics. He hopes to receive a doctorate in theoretical condensed matter physics in order to lead a theory group modeling electronic properties of novel materials for organic electronics, and also to teach at the university level.

Bailey G. Flanigan, a fourth-year student from Madison majoring in biomedical engineering. She hopes to receive a doctorate in bioengineering in order to conduct cancer research while teaching at the university level. Flanigan was also nominated last year, receiving an honorable mention.

Hannah M. Mast, a junior from Menomonee Falls, Wisconsin, majoring in biochemistry. She hopes to receive a doctorate in biochemistry and a medical degree in order to conduct biomedical research related to neurological disorders, as well as teach at the university level.

Congress established the Barry M. Goldwater Scholarship and Excellence in Education Program in 1986. Goldwater, the award’s namesake, served in the U.S. Senate for over 30 years and challenged Lyndon B. Johnson for the presidency in 1964. The program aims to develop highly qualified scientists, engineers and mathematicians through its scholarship award, given to undergraduates pursuing careers in these fields.