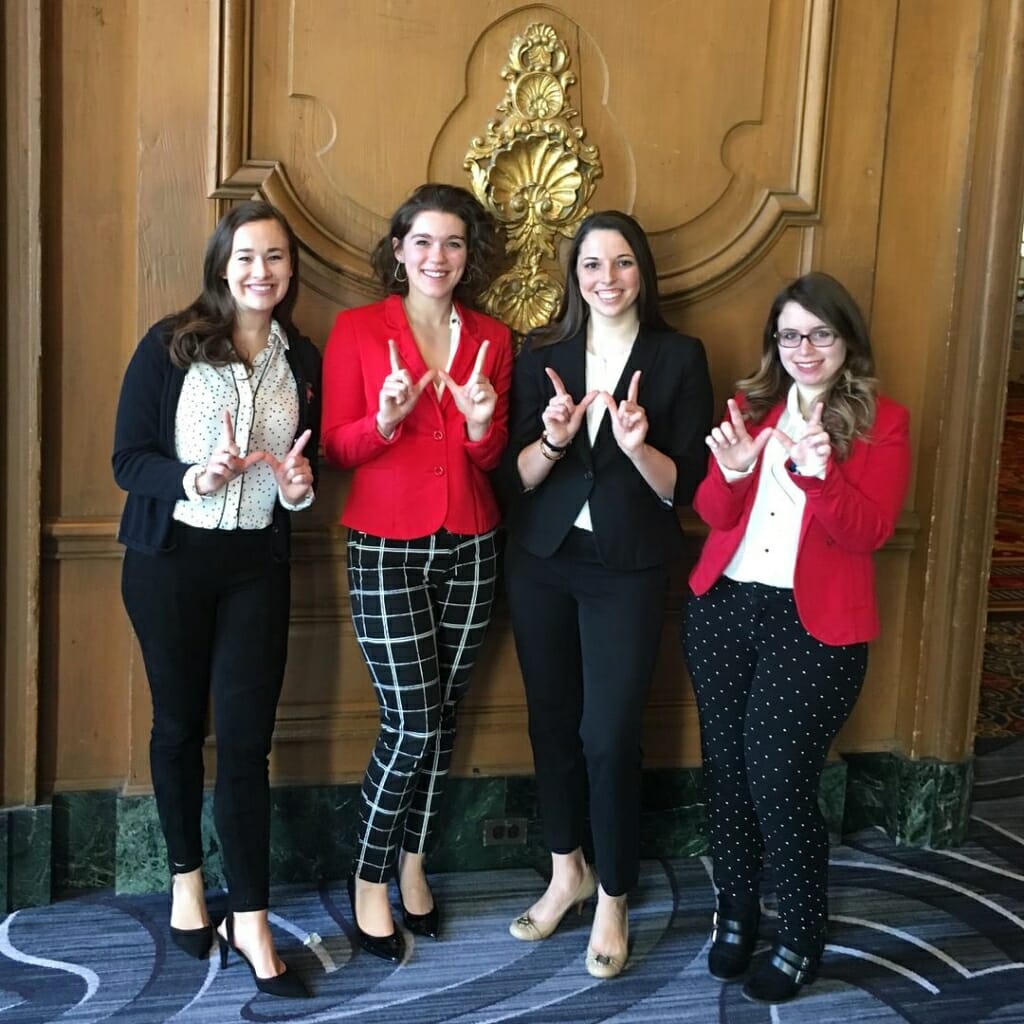 A big win at a national baking competition by a team of four UW–Madison food science students has shone a spotlight on the food science program.

At the American Society of Baking’s 2018 Product Development Competition, a team of four from UW–Madison won with Sustain-a-Bites, a freeze-dried cake bite created with freeze-drying technology that caught the judges’ attention.

The team members are Saslow; Tatum Teskey, a senior from Verona; Paige Palmieri, a graduate student from Niantic, Connecticut; and Monica Caparosa, a master’s student from Butler, Pennsylvania.

This was the first year UW competed in this competition.

“The American Society of Baking (ASB) product development competition was not part of a class, but the Food Science Club coordinates and supports a variety of these competitions for students,” says Saslow. 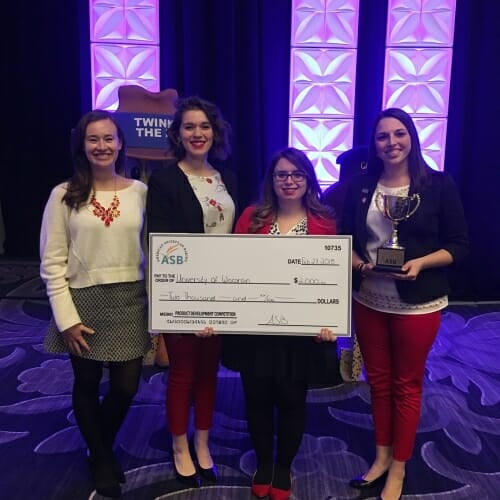 The champion team members with their winnings. Submitted photo

The food science program is part of the College of Agriculture and Life Sciences and has around 120 undergraduate students, eleven faculty and five instructional staff. Many of its graduates go on to work in product development at food companies.

“Our students also work in quality roles within food companies as well, working in the manufacturing plant to make sure the food is safe to eat and meet the quality standards set by the company,” said Richard Hartel, food science undergraduate program coordinator. “A few go into production jobs and a few into technical sales.”

“Food science has always been a strong department in terms of internships and job placement. We also invest a high amount of effort in helping our students learn – lots of mentoring, advising, office hours, etc.,” said Professor Scott Rankin, chair of the food science department.

The goal of the American Society of Baking competition was to create a futuristic, internationally-inspired cake or sweet bread that was shelf-stable for at least two weeks. The UW–Madison students took these requirements and created a German Black Forest cake bite with a layer of freeze-dried chocolate cake with dried cherries and chocolate chips and a layer of cherry pectin jelly enrobed in dark chocolate.

“One of the reasons our teams do well in product development competitions is that they bring a science-based approach to it,” Hartel said. “The ASB competition was a bit more chef-type but the judges had a science background, not culinary. So being able to discuss, for example, the fundamentals of water migration between the dried cake and high-moisture jelly was an important part of it. And they built a solution to the cake getting soggy into their product by laying down a water barrier between them to slow down water migration. It just happens that chocolate is a good water barrier as well as a good addition to this product,” Hartel concluded.

“We believed the most difficult challenge would be to meet the shelf life requirements since some cakes barely last two days, let alone two weeks,” Saslow said.

Paige Palmieri had been using the freeze dryer for her research on campus and proposed using it on the cake for the competition, which extended the shelf life and added a futuristic feel. The team built on the futuristic theme with an emphasis on sustainability, specifically with cocoa shells. Cocoa shells are traditionally a waste item from the chocolate industry, but they enhanced the chocolate flavor and served as a healthier substitute for the cocoa powder in the cake. The international component requirement was met through the German Black Forest chocolate cherry flavor.

Saslow also has a blog, ‘The Nerdy Chef’. On the blog she writes, “I’ve been cooking as long as I can remember, and I started shadowing in restaurants around Atlanta at age 13. Basically, I would show up on Saturday mornings and help the pastry chef(s) with whatever he/she/they need; I shadowed at Pricci, The Horseradish Grill, Alon’s Bakery and Seed.”

She has won awards for her baking, including Share Our Strength’s Great American Baking Contest in 2011. She has worked at Alon’s Bakery, ConAgra and Wrigley.