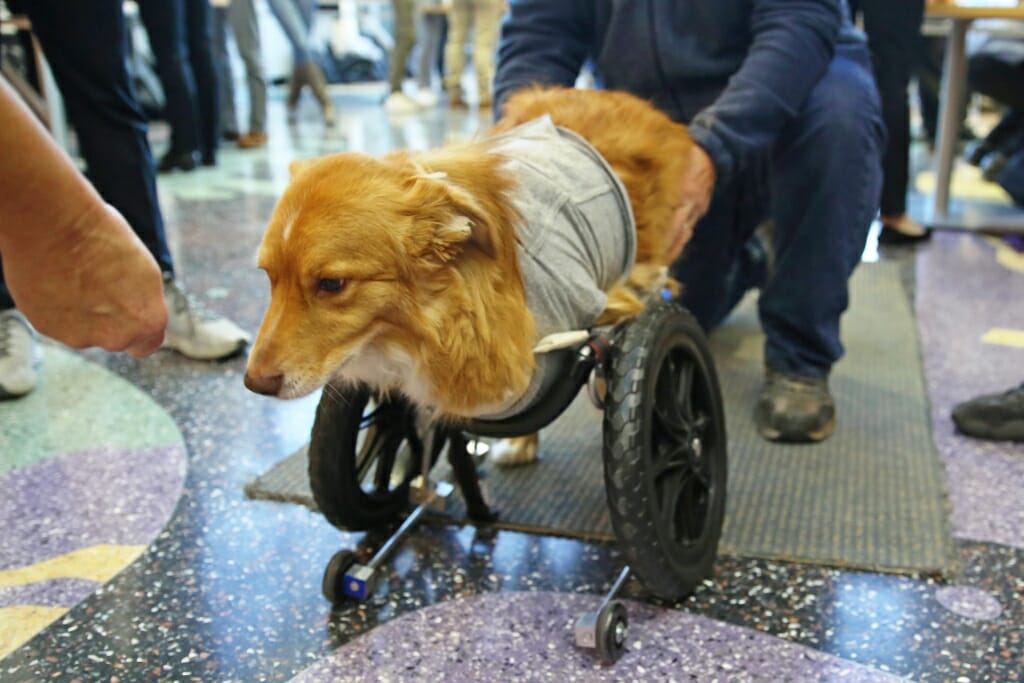 Louie the dog, born without front legs, walks with the assistance of a cart the University of Wisconsin–Madison students modified for him. Photo courtesy of Kristen Koening

This holiday season, Louie the dog is getting a gift anyone might envy—a new set of wheels.

Louie, owned by Madison residents Pat and Pete Sammataro, is a 4-year-old Nova Scotia duck tolling retriever mix who is, by any measure, as lively as they come. There’s only one catch: Louie was born without his front legs.

Pete says Louie was born to a breeder in Atlanta who originally planned to euthanize him. For a time, Louie lived with the niece of a friend of the Sammataros until she had to travel overseas for a summer. After hearing about him, the Sammataros decided to welcome Louie into his forever home.

Earlier in 2019, Pat contacted Katie Kalscheur, a lecturer for the college’s interdisciplinary freshman design course, after hearing about past students’ work to create prosthetic legs for Sgt. Stubbs, a cat who lost his two hind legs in a train accident. 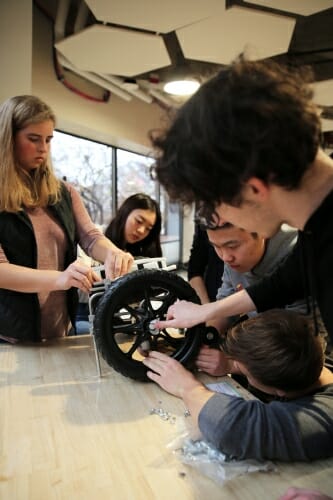 University of Wisconsin–Madison first-year engineering students Jessica Neinhaus, Angela Bae, Fengwei Liu, Josh Herche and Jonah Herman work on their cart for Louie. The students were a group in the College of Engineering’s freshman design course. Photo by Sarah Page

The Sammataros hope that Louie’s new cart will give Louie same chance at enhanced mobility.

“We just want him to be able to go on walks and sniff around the neighborhood like any other dog,” Pat says. “It will really enhance his quality of life.”

Jonah Herman, a freshman biomedical engineering student on the seven-person “Louie” team, says the group planned to make modifications to a commercially available cart the Sammataros purchased for Louie. While the cart was designed for dogs without front legs, it didn’t suit Louie. For example, freshman biomedical engineer Jessica Nienhaus says most dogs’ shoulders are higher than their hips. Louie, who has learned to scoot along with his chest on or near the ground, is an exception.

“He just didn’t like it,” Pete says. “It’s kind of complicated to set up and get on him. I think that made him anxious and he wouldn’t use it.”

The students removed about half of the cart, adjusted it so that it can tilt forward to accommodate Louie’s posture, and added small wheels for stability. They also added padding for comfort and presented Louie with a soft, calming vest to help him get used to the feeling of the cart around him.

“We needed to do something that was comfortable for Louie,” Nienhaus says. “The old design has a lot of Velcro and mesh and he’d slip right out of because he didn’t like being encased.”

Louie walks in the new cart, with some guiding and doggie treat encouragement. Pat says the Sammataros will continue to work with Louie to get him used to moving around with his new cart. 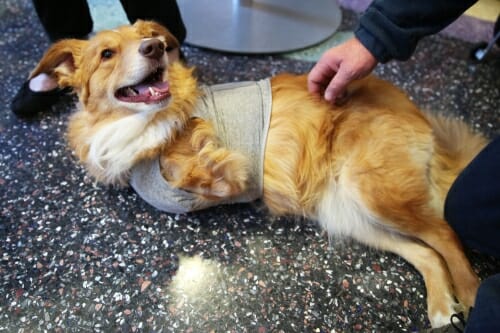 “This group of students has been wonderful,” Pat says. “They came up with a design that’s impressive and stable, and stability was a problem with the old one we had. Their design is amazing, and now it’s up to us to work with Louie and get him used to it.”

The design course offers first-year students from across the college the opportunity to learn engineering by doing it. Students in the class are split into teams to take on projects with real-world applications.

“I know a lot of engineering students from a lot of colleges across the country and we’re the only ones I know of who are tackling real-life engineering projects for real people right away,” Herman says.

Nienhaus says working with Louie (and his owners) has been invaluable experience for pursuing further research in prosthetics.

“I want to go into biomedical engineering, and working on prosthetics is a huge part of that,” Nienhaus says. “You have to think about biological things that go into it. For example, the way he’s going to move where his back legs are up — that’s just natural to him. We also have to think a lot about overheating and his overall comfort. It’s nice to be able to put all of that together with the engineering side of it.”