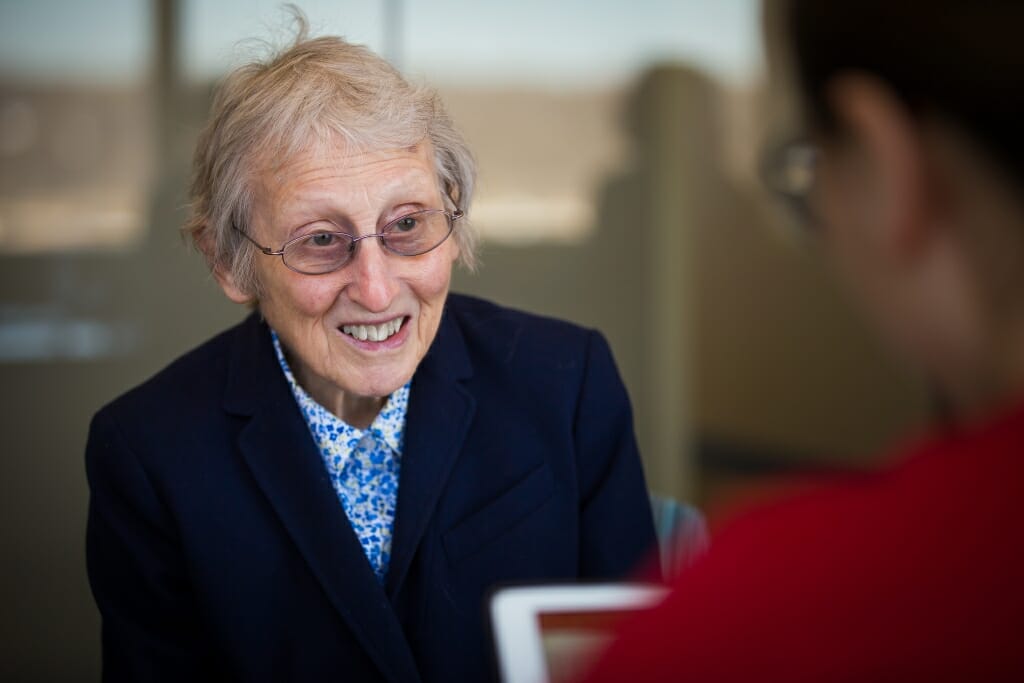 Seventy years after New Glarus native Karen Pridham set her feet on the path toward steady improvements in the practice and humanity of nursing, the basic pavement is clear: smarts, aptitude, humility and the ease and grace to forge strong human ties.

Known at the time as “infantile paralysis,” this nerve-attacking virus caused death and disability until a vaccine was invented in the early 1950s.

The year was 1948, and Pridham, 13, had left her home to attend a University of Wisconsin music clinic. Her studies of alto sax were interrupted when she contracted polio and was sent to the hospital in Madison.

Fortunately, her case proved mild, and she assisted women on “iron lungs” (respirators) in the polio ward. 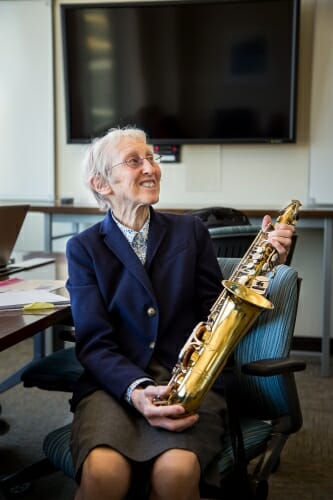 Pridham holds an alto saxophone given her by husband, Walter. She last played alto in high school. Alexander Andre, School of Nursing

The resulting impression was indelible – and positive: “I thought I’d like to do that, do something in a health care setting,” she says this spring, in a conference room overlooking University Bay in Signe Skott Cooper Hall, the sunny new headquarters of the School of Nursing.

Not one to waste time, she graduated from high school and boarded a bus to Madison the next day, “holding a little suitcase—a graduation present.” She shared a room at the YWCA with her sister and worked as a nurse’s aide at Children’s Orthopedic Hospital.

That fall, she began nursing school at the University of Wisconsin, funded by the Knapp and Rennebohm Foundations and a scholarship that she had earned as class valedictorian. “I had an inflated view of myself,” she says with a quick laugh. “I wanted to be a professor here, but I thought it would be a far stretch for me.”

If not a far stretch, it has certainly been a long stretch. As we talked, Pridham, 84, was wrangling with editors about hotlinks in her upcoming book, Guided Participation in Pediatric Nursing Practice: Relationship-Based Teaching and Learning with Parents, Children, and Adolescents, the second in her career. It could be her last – she’s pondering retirement, but is admittedly having difficulty putting aside her enduring passion: caring for severely ill children, many of them born highly prematurely, and their families. Pridham, a faculty member at UW–Madison for 52 years, received the Distinguished Achievement Award from the Nurses’ Alumni Organization in 1998 and the Midwest Nursing Research Society Lifetime Achievement Award in 2013.

The story of an emeritus professor of nursing who has guided a legion of grateful graduate students is rooted in mentorship and dedication. It’s about taking delight in the people you meet and seeing the human behind the disease or stigma.

Through it all, the apparent driving force is the delight of paying it forward.

After training as a public-health nurse, Pridham worked for the Madison public health department in a neighborhood called Greenbush, near Lake Monona. “I loved it,” she says. “There were African-American families moving in from the south, whites from rural areas, Jews from Russia, Italians; it was a real melting pot.”

Her work focused on communicable disease, checking children’s immunizations and making sure they could see doctor, on vision problems and dental care. “It was downright fascinating,” she says. “I worked mostly on foot. In spring, people were out with their children, and I visited as I went.”

Pridham credits her mother for an easy transition to the melting pot from the homogenous, Swiss-dominated community of New Glarus.

“The depression hit us hard, but nobody was left out of a birthday party,” she says. “My mother taught me how to engage with people in whatever walk of life.”

The ability to relate with diverse people was tested when Pridham worked as a nurse at Lapham School on Madison’s East Side. “There were some children with chronic illness who were missing a lot of school. To follow-up with the parents, I visited the home and started the assessment I had learned: ‘How are things going? What are the issues? How can I be of help?’ and the family basically said, ‘We don’t want any part of you.’ I realized I had much to learn about how to communicate with parents. I certainly was not offering anything in a way that was acceptable.”

In 1952, a chance collision at Pres House, the campus Presbyterian church, changed her life. This collision involved neither music nor polio, but rather a U.S. Air Force sergeant, fresh from a 2,000-mile, cross-country jaunt on two wheels. 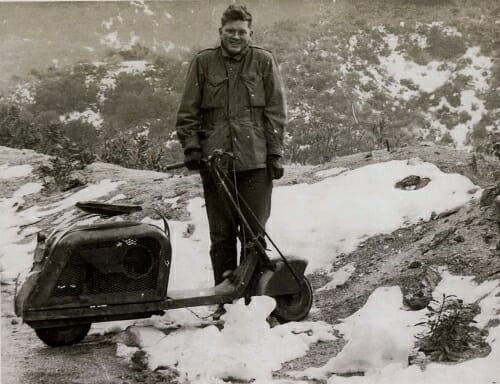 Walter Pridham ascended Mt. Wilson in California on this primitive motorcycle years before he drove another motorcycle 2,000 miles to Madison, where he met and married Karen Frick. Photo courtesy Karen Pridham

Walter Pridham had just driven a 250-cc Austrian motorcycle for five days from his home in Los Angeles County to a posting at Truax Air Force Base in Madison. After a victory lap around the capitol, he buzzed down State Street and dropped into Pres House, to volunteer for the choir.

On his third visit to Pres House, he rounded a corner and bumped (not swept) a nursing student from New Glarus off her feet. He helped Karen upright, and quickly suggested a cup of coffee at the Rennebohm’s drug store one block down State St.

The two married in 1956, had two children, and enjoyed a long and happy marriage. Walter died in September 2018. As regular church-goers with a passion for organ music, they had funded restoration of a church organ in Madison.

In 1964, Pridham returned for a Master’s in Nursing, under the mentorship from Florence Blake, who, she says, “changed pediatric nursing in this country and developed programs in Beijing, India and Brazil.” At the time, the common exclusion of parents from a child’s hospital room made hospitalization “miserable for both sides,” says Pridham. “Florence emphasized that the children did better if parents were allowed to visit” – which nowadays seems equal parts common sense and common humanity. Blake was a renowned nurse, educator and scholar who established the University of Wisconsin pediatric nursing graduate program in 1963.

In her first class with Blake, “We worked with children in hospital pediatric units, babies, toddlers, adolescents, as participant observers. We had to observe carefully and write up in field notes the details of the conversation and our emotional reaction. We had to turn the notes to Ms. Blake. She read and commented on each aspect of the episode.”

The class set the style for Pridham’s own teaching: Lots of exposure to the real world, a wide-angle view of the whole situation, and an emphasis on the family. “I owe Florence much credit for what I have done ever since,” she says of her mentor. “She focused on the strengths the child had and what kind of developmental task the child was working on.”

“It was not a focus on the pathology. It was a focus on how you support the positive things the child had going on.”

Some of her observations had occurred at the Preschool Lab on campus, and I mentioned how teachers at the Lab had guided my younger son to use his skills to help younger children.

“When you told me that story, I immediately got into that frame of mind,” Pridham responded. “It was not a focus on the pathology. It was a focus on how you support the positive things the child had going on.”

Because the School of Nursing did not then offer doctorates, Pridham got a Ph.D. in continuing and adult education at the School of Education in 1972, then spent the majority of her career working on nursing issues related to children with chronic or critical illness.

Pridham stood out for ambition, smarts and hard work, says Christopher Green, who collaborated with her in pediatric pulmonology research, and is now chief medical officer at American Family Children’s Hospital. “She was willing to do things that were technically difficult, such as a system to measure energy expenditure of babies. She worked, worked, worked to get it going.”

Beyond technical issues, “it was clear she had a broad view of patient care,” Green says. “She was ahead of her time in her emphasis on interdisciplinary care” that might involve, for example, pediatricians, lung specialists, nurses, pharmacists and social workers as needed. “Now people all over the country recognize the importance of interdisciplinary care, but she knew that early on.”

Feeding was another interest. Pridham and her master’s students videotaped breast and bottle feeding in patients’ homes. While reviewing the tape with the mother, they would discuss what had just happened. “Getting into the parent’s space was eye-opening, especially for clinicians who were only familiar with problems from the clinic visit,” she says.

Pridham might test wild ideas. If a child who refused to eat seemed repelled by food, she might suggest desensitization to gradually make the experience more pleasant: “I know you don’t want your daughter smearing applesauce in her hair, but why don’t we let her play with food?”

Gradually, she forged these observations into a theory called guided participation that, among other things, offers a novel way to convey ideas about problematic experiences or questions. If a baby is out of breath during feeding, for example, how can a nurse help a mother recognize and solve the problem?

“It’s a very sensitive matter to interact with a mother around feeding,” Pridham says.  “She may be very anxious and concerned about criticism. ‘You’re doing it wrong, try it my way!’ is often a recipe for failure, and it may be better to ask, ‘What was going on for you right here? How did you decide to do what you did?’”

Such an approach, she says, “brings to the forefront her thinking and what she has been observing. Maybe later you can ask, ‘I wonder what is going on for your baby?’”

Rather than making the two sides adversaries, guided participation makes them allies in the quest to help the baby.

Rana Limbo saw Pridham’s sensible, helpful approach while getting a Ph.D. in the 1990s. Together, they spent years visiting families in Milwaukee’s central city. “It was a wonderful experience,” Limbo says. “I was learning from the best. Many of these families did not have a lot of resources. Some people think these parents would not be interested in the baby, but that’s so wrong.”

Limbo, who is about to retire as associate director of a bereavement program at Gundersen Medical Foundation in La Crosse, points to many characteristics to explain Pridham’s influence. “In no particular order, it’s because she’s unassuming, extraordinarily bright, and listens carefully to every idea. She’s complimentary and very empathic, an exemplar with children. She learned from the best, from Florence Blake, and carried that tradition through to the work I did with her. She’s fascinated by people’s stories, and wants to know all there is to know. Not because she is snoopy, but because she is truly interested.”