Engineering students at University of Wisconsin–Madison showed off a few projects to each other and to representatives of eight Wisconsin companies ranging from small and local to large and national. The projects included a prototype for a Mars rover and a phenomenally impractical watch based on obsolete technology.

The event showcased Makerspace, a two-year-old maker’s paradise located in Wendt Engineering Library. With a broad range of equipment and tools, Makerspace is “The hub for rapid prototyping on campus,” says Taylor Waddell, a third-year mechanical engineering student who coordinated the event. “How do you go from idea to reality as quickly as possible? The central idea of making is, if I have a problem, what is the quickest way to solve it? The solution may not be going to buy a product. Maybe it’s better if you make it.”

The event was dubbed a “reverse career fair’ because it inverts the usual relationship, where potential employees wander past employer booths, says Waddell. “It’s a great way for students who have been making a wide range of projects and prototypes to show them off. Typically, at a career fair you just hand out your resume. If you bring your prototype here, and show it to the company reps, that’s a little more personal; it will create a better relationship.” 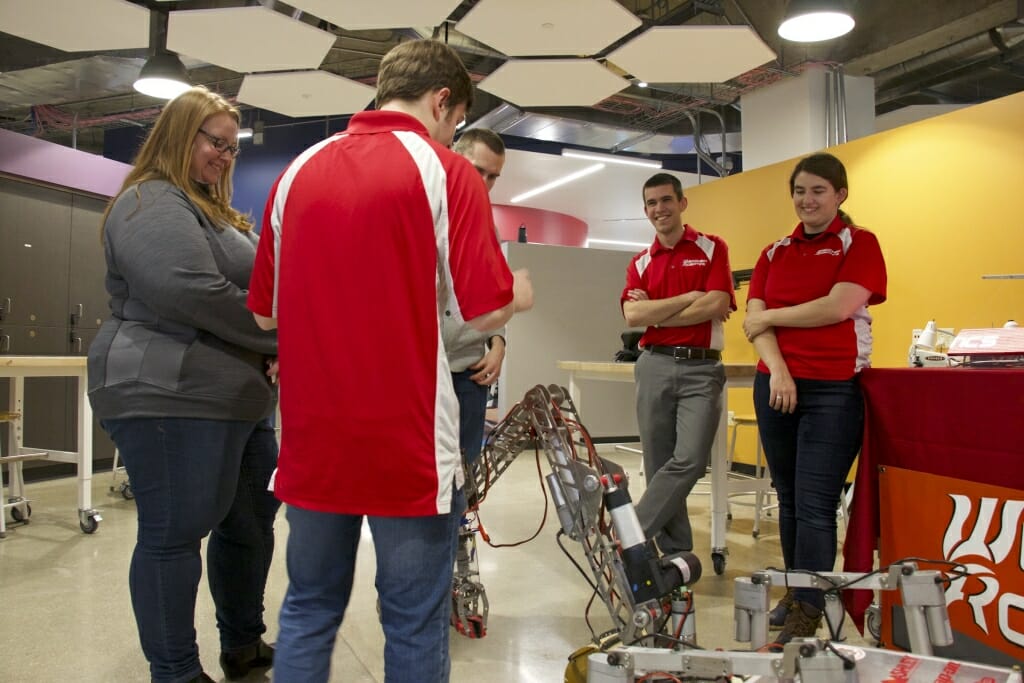 It’s hard to resist a robot Mars rover prototype, but Arinne Lyman, left, is more interested in recruiting engineers for her employer, Georgia-Pacific, which has eight facilities in Wisconsin. “We find events like these are a perfect opportunity to find and recruit top talent,” says Lyman, who is research and development manager at Georgia-Pacific’s R & D facility in Neenah. “While we focus on chemical, mechanical and electrical engineering, we are open to other backgrounds and education. If you have the talent and initiative, and more specifically an interest in lifelong learning and an entrepreneurial spirit, you will fit well into our company culture and we want to have a conversation about your goals and interests.” Victor Freire (second from right), a mechanical engineering senior from Granada, Spain, and Allison Conrad (right) an electrical engineering senior from Pewaukee, Wisconsin, are both members of Wisconsin Robotics, the student organization that built the rover. Photo by David Tenenbaum 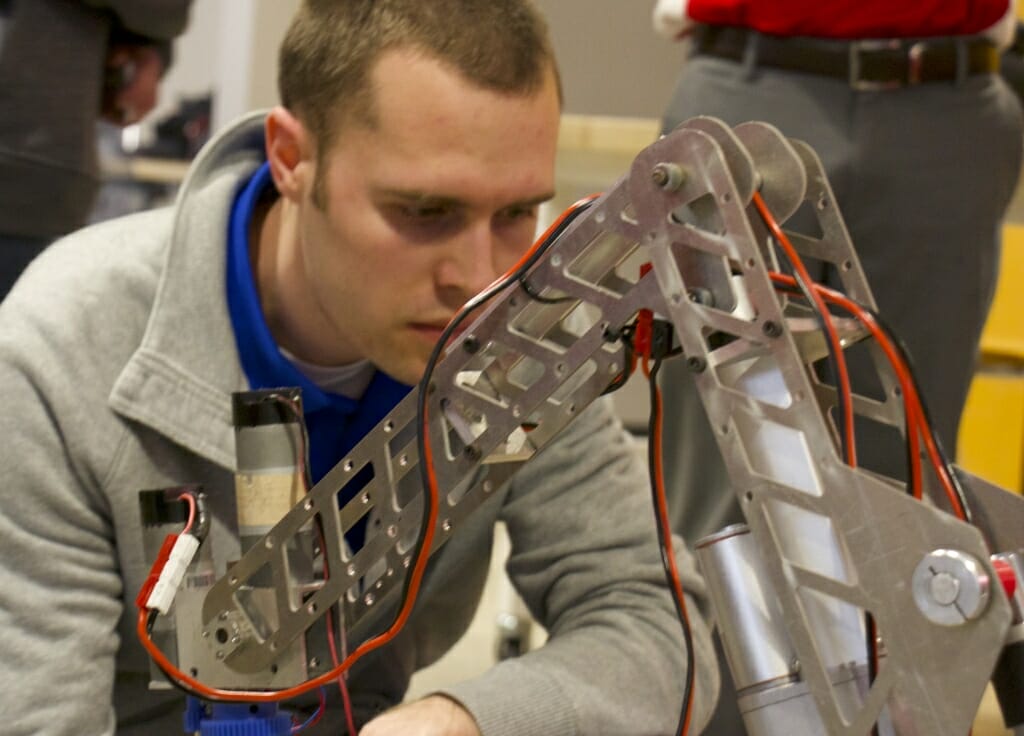 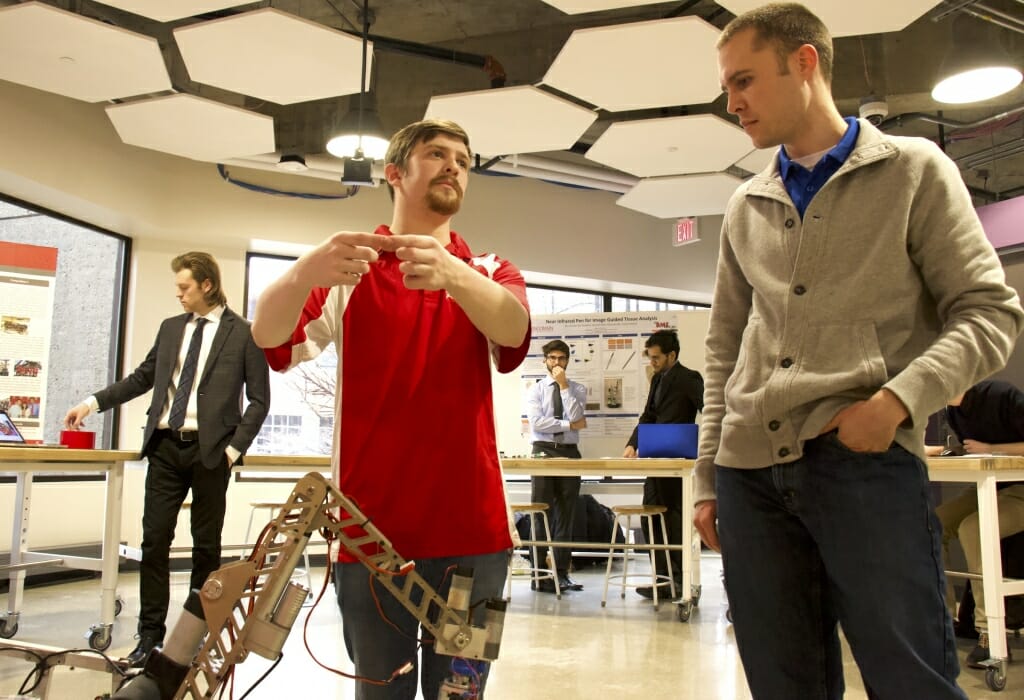 Nick Ackerman, a senior in nuclear engineering and president of the Wisconsin Robotics team, discusses the Mars rover with Bradley Maccoux, visiting from Georgia-Pacific. This is the third-generation rover from Wisconsin Robotics, which was one of only 36 teams accepted at the 2018 University Rover Challenge, held in the Utah desert. Each rover had to travel under its own guidance to specific GPS coordinates, drill into the ground to detect any life present, and perform certain tasks with its arm, such as servicing the mother ship. “I’m learning more about interdisciplinary work, blending mechanical, electrical and software engineering, to see how it all works, how the system comes together,” says Ackerman. Photo by David Tenenbaum 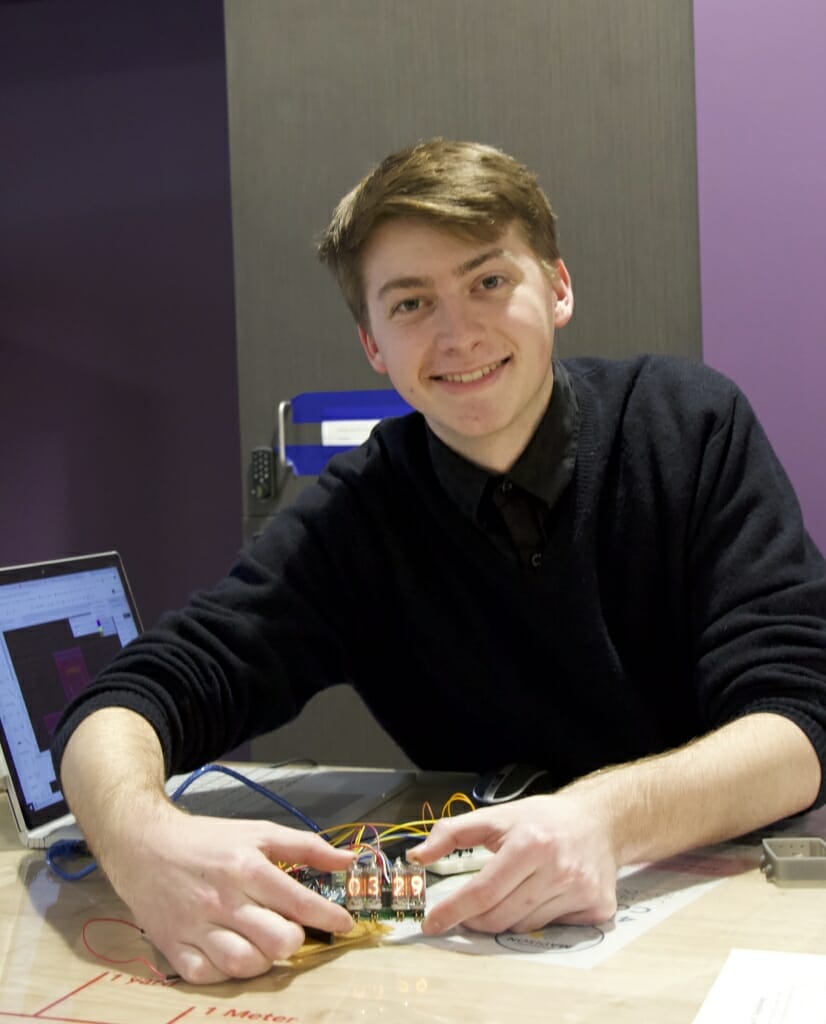 Ian Hogenkamp, a mechanical engineering junior who is interested in a summer internship, based this nerdward watch on an archaic display technology called the nixie tube. “I like the look and thought it would be cool to make a watch from them,” he says. “It works [photo was shot at 3:29 p.m.!], but I’m still fixing it” because some code was updated. “I think it’s important to be well rounded. I used this project to teach myself to do things I’d never done before, like circuit design.” Photo by David Tenenbaum 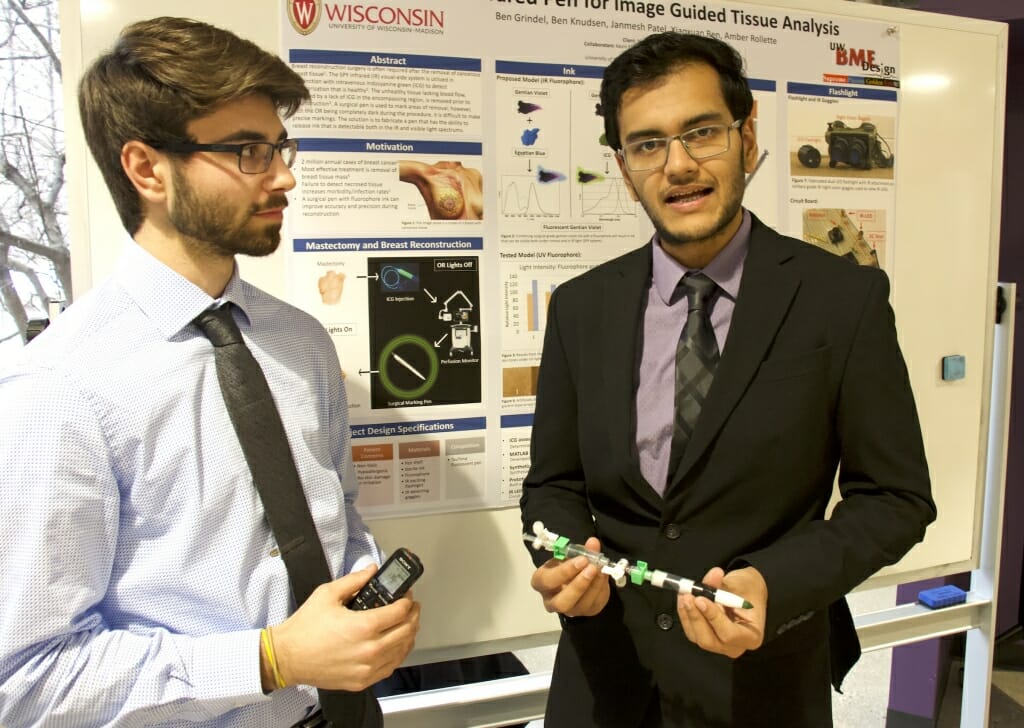 Biomedical engineering students Ben Knudsen, left, and Janmesh Patel, are developing a pen to mark tissue during breast surgery performed under infrared light, which helps a surgeon see cancer cells. Both the pen itself and the lines it draws will be visible in infrared. The pen will also contain conventional ink to mark tissue for evaluation and treatment in daylight. Photo by David Tenenbaum

The new surgery pen combines off-the-shelf parts with products of 3D printing, and is being built under the guidance of plastic surgeons at UW Health. Photo by David Tenenbaum