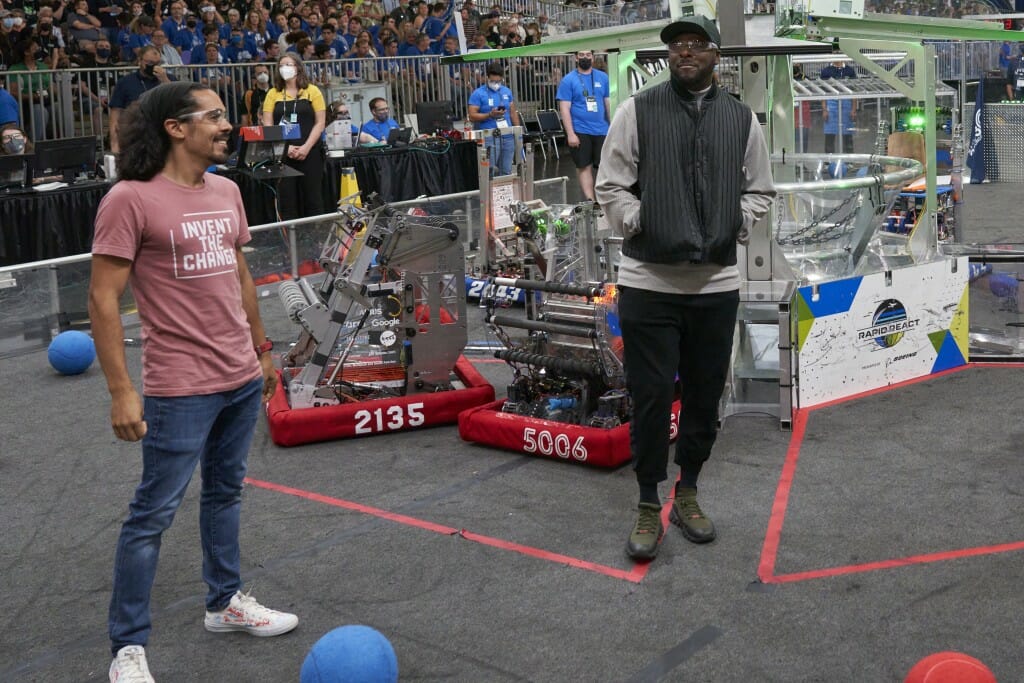 Flores works with FIRST, a global nonprofit that advances youth STEM education, partnering with the organization on its LEGO League and Robotics Competition events. Shown is the FIRST Championship in Houston, Texas on April 22.

When Jay Flores isn’t in his kitchen cooking up fun, interactive science experiments for kids or traveling internationally to deliver energizing talks about the power of science, technology engineering and math, the University of Wisconsin–Madison alumnus is climbing and leaping through obstacle courses to train for NBC’s American Ninja Warrior.

On Monday, June 6, Flores will fulfill a longtime dream. After 10 years of rejected applications and failed walk-on attempts in multiple cities, he finally got the call to compete on the show — and an opportunity to share his message about STEM and perseverance on television’s big stage. While there’s no guarantee of lengthy screen time, Flores’ episode will air Monday at 7 p.m. on NBC.

Flores is member of the Mystery Science Team through Discovery Education, a digital learning platform that reaches K-12 students in tens of thousands of classrooms across the United States. More than a million students see Flores in Mystery Science videos, where he fosters curiosity by answering questions like “How were LEGO bricks invented?” and “Why don’t people fall out of roller coasters when they go upside down?”

Inspiring youth to excel in STEM and become tomorrow’s innovators isn’t just a day job for Flores, who earned his bachelor’s degree in mechanical engineering at UW–Madison in 2012. Rather, he wears his STEM ambassador hat pretty much 24/7. 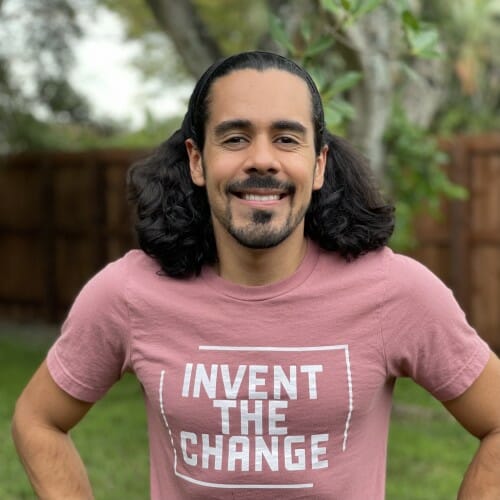 “I focus on leading with the passion behind STEM, finding the real-life examples that excite kids and then showcasing the science and math behind it,” Flores says. “By nurturing kids’ sense of wonder, I hope to inspire them to explore STEM and go on to use their knowledge to do cool things and make a positive impact in the world.”

A Milwaukee native, Flores attended UW–Madison on a full scholarship as a Rockwell Scholar.

During his time as an engineering undergraduate, he became interested in STEM outreach through his involvement in extracurricular activities and student organizations.

In particular, he says membership in the UW–Madison chapter of the Society of Hispanic Professional Engineers allowed him to grow as a leader and develop his presentation skills as he participated in the group’s K-12 STEM outreach efforts. Later, when Flores was 19, SHPE elected him to its national board, making him the youngest voting national board member in the organization’s history; he served five years on the board.

After graduating with his mechanical engineering degree, along with certificates in international engineering and in leadership, Flores started his career at Rockwell in the company’s global sales training program. He then advanced into a sales position based in southern Florida.

Meanwhile, he continued to pursue his passion for outreach, bringing his inspiring, inclusive message about the power of STEM (as well as his characteristic high enthusiasm) to after-school programs and events. In 2014, he gave a well-received TEDx talk, “Growing with S.T.E.M.,” targeted at youth.

Then one day, everything changed. Flores was staffing Rockwell’s booth at the FIRST Robotics World Championship, and he struck up a conversation with a Rockwell vice president who happened to have seen the TEDx talk.

“She said, ‘You’re like our STEM ambassador,’” Flores recalls. “And it occurred to us both that this kind of role could be good for the company and the industry overall by helping to strengthen and diversify the STEM workforce pipeline for the future.”

That conversation set into motion a new Rockwell position — global STEM ambassador — a job specifically designed for Flores that would leverage his unique skills and passion. In his new role, Flores focused on developing the global strategy for Rockwell’s investments in STEM outreach to ensure that the company’s efforts were impactful and helping to increase diversity in technical fields.

“Rockwell’s outreach had mainly been focused in the United States, so we also looked at how we could have more of a global impact in other countries where Rockwell operates, such as Australia, Brazil, Mexico and Singapore,” Flores says. “And I got to travel to a lot of countries and lead really cool STEM events as part of my job, which was awesome.”

Then, in early 2020, everything changed again. The COVID-19 pandemic put an end to international travel and large in-person gatherings. With all of his upcoming STEM events canceled, Flores had to adapt.

He realized there was an opportunity to support youth who were now attending school remotely and might lack access to enriching STEM activities. He tapped the one resource most students could access: a kitchen. There, within his own kitchen, Flores created a STEM education series called “It’s Not Magic, It’s Science!” The series consists of science experiments disguised as magic tricks to increase excitement and awareness in STEM.

As a charismatic presenter with a talent for video, it was natural for Flores to create short, entertaining videos for each “magic trick,” which he posted on TikTok and other social media platforms.

“I decided on the magic angle because I wanted to reach students who weren’t already looking for science content,” Flores says. “Magic is inclusive, and a fun trick can appeal to pretty much anyone, regardless of their age or background. After I spark the students’ interest with the trick, I explain the science behind it in an engaging way and invite them to explore further.”

It’s Not Magic, It’s Science! took off on social media, eventually racking up millions of views. At the same time, Flores felt he was ready to take on another creative challenge: expanding his impact by working with a wider variety of STEM-focused organizations. He decided to leave his job at Rockwell and, in January 2021, he formed Invent The Change, a company with a mission to change the world by inspiring young minds to keep doing cool things in STEM.

He says his UW–Madison education was integral to his success. “The leadership opportunities and educational experiences I took advantage of at UW–Madison gave me the skills and confidence to be adaptable, tackle challenges and pursue exciting opportunities, such as becoming the global STEM ambassador at Rockwell and launching my own business,” Flores says.

In 2021, Invent the Change began collaborating with other STEM organizations to share best practices from It’s Not Magic, It’s Science! For example, he partnered with SHPE to host Noches de Ciencias (science nights) to bring the power of math and science into Hispanic households across the country. He plans to continue building on his partnership with SHPE to bring STEM awareness, access, support and development resources to those underrepresented communities.

While Flores was excited by the success of his videos, he wanted to ensure that kids were having impactful hands-on experiences with It’s Not Magic, It’s Science! as well. So he created an accompanying STEM kit that allows kids to perform fun experiments at home.

Importantly, as Flores designed each experiment in the kit, he kept equity and access top of mind. Most of the experiments can be completed with low-cost items many people have at home or with materials that can be easily ordered online for only a few dollars.

“Inclusion and diversity are so important to me because I want every kid to have the opportunity to work on problems that interest them and to invent the change that they want to see in the world,” Flores says. “And to unlock their potential and empower kids with STEM, we need to inspire more young kids from diverse backgrounds to pursue math and science learning opportunities and also support them to keep them engaged in STEM as they get older.”

In addition to the It’s Not Magic, It’s Science! brand, Flores and Invent The Change have been steadily adding new partnerships and collaborations. He is the host of the PBS innovation show “Make48” and also works with FIRST, a global nonprofit that advances youth STEM education, partnering with the organization on its LEGO League and Robotics Competition events.