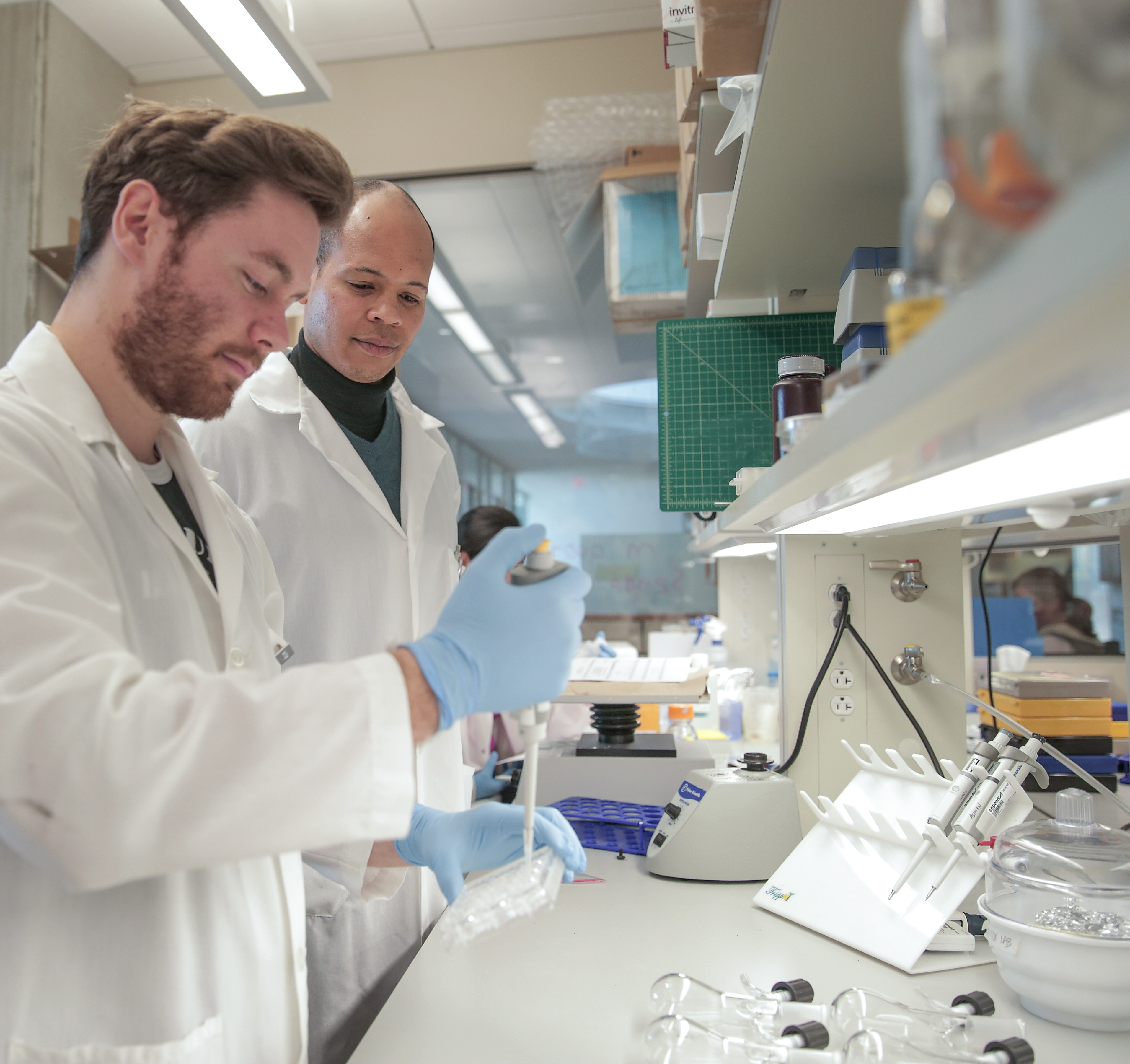 Randolph Ashton (right, with graduate student Gavin Knight) will use support from a National Science Foundation CAREER Award to develop spinal tissue that can be easily grown in a laboratory and used by to study disease and personalized medicine. Stephanie Precourt

For a soldier who suffered a spinal cord injury on the battlefield, the promise of regenerative medicine is to fully repair the resulting limb paralysis. But that hope is still years from reality.

“When regenerative medicine started, its stated goal was to replace damaged body parts and restore their function,” says Randolph Ashton, a University of Wisconsin–Madison professor of biomedical engineering. “But one of its less-anticipated applications is the ability to create human tissues and watch diseases occur in a dish, which is extremely powerful for developing new therapies.”

Not only powerful, but efficient. Studying diseases in lab-created tissue may help reduce the price tag — now roughly $1.8 billion — for bringing a new drug to market, which is one of the reasons Ashton received a National Science Foundation CAREER Award for advancing tissue engineering of the human spinal cord. During the project’s five-year funding period, his lab in the Wisconsin Institute for Discovery will fine-tune the technology for growing a neural tube, the developmental predecessor of the spinal cord, from scratch.

As the neural tube matures and diversifies during the development of a human embryo, it gives rise to the two core parts of our central nervous system: the brain and spinal cord. By replicating this process in a dish, Ashton hopes to develop a platform for research that is highly reproducible and can be broadly disseminated. Biologists could simply add their cells to Ashton’s starter tissue to build a model of whichever spinal cord disease they desire.

By starting with cells from an individual patient, researchers will be able to target disease therapies to a particular genetic background — a concept known as personalized medicine. Drug tests in engineered spinal cords may become an intermediate step between animal models and clinical trials of patients affected by Lou Gehrig’s disease, multiple sclerosis or spinal cord injuries, helping to bridge the differences between a human and rodent spinal cord.

“We’ve cured spinal cord diseases in a lot of rodents over the years, but only a small percentage of those drugs work in humans,” Ashton says. “If we can make the engineered tissue as close as possible to what’s in our body, this will eventually translate to better drugs.”

The recipe Ashton and fellow UW–Madison engineering professors Lih-Sheng (Tom) Turng and David Beebe plan to follow to coax stem cells into forming a neural tube goes something like this: First, they use water-soluble Lego-type molds to create microscale cavities within a jelly-like substance. Then they add human neural stem cells into these cavities, and let the cells coalesce as they do naturally to form neural tube-resembling tissue.

Next, they add signaling molecules whose variable concentration instructs the stem cells to turn into different types of neurons and neuron-supporting cells. Last comes the greatest challenge: getting these specialized cells to connect to one another and form electric circuits that give the spinal cord its function.

“The complexity of the central nervous system exists because specific circuits have to form over very long distances. If any part of a circuit goes awry, you lose function,” Ashton explains. “The biggest open question is whether the tissue we create in vitro will have the proper wiring of different cell types to yield circuits similar to those in our body.”

Ashton, who is African-American, comes from a socially active family background — his grandfather was a minister and president of the Virginia chapter of the NAACP. He has assisted the nonprofit group 100 Black Men of Madison with its K-12 mentoring programs for years.

He plans to use the new grant to develop virtual interactive lab experiments and matching teaching modules.

“I hope to attract more students to the fast-growing field of regenerative medicine,” Ashton says, “and to motivate people to continue to fund this kind of research so that we can develop therapies to cure diseases, instead of just treating their symptoms.”