Engine software from UW spinoff being used around the world 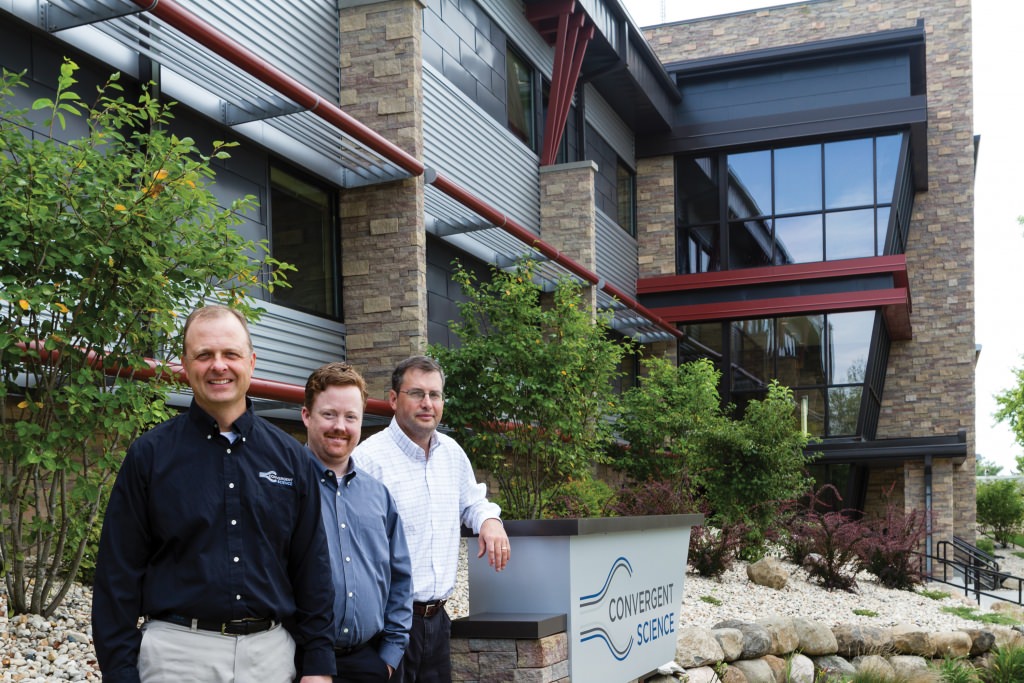 “If you make an engine in the U.S., chances are you use our software, and that’s starting to be the case in Japan,” says Senecal, a company vice-president. “We’re a little behind in Europe, where we started later, but we’re also starting to make inroads there.”

The company, with deep roots in the UW–Madison department of mechanical engineering, makes advanced software that predicts and explains events inside the cylinder of an internal combustion engine – meaning virtually any engine powered by gasoline or diesel fuel.

Software from Convergent and its competitors supplants the process of trial and error, which has ruled engine design since European inventors began chasing a replacement for the steam engine around 1860. 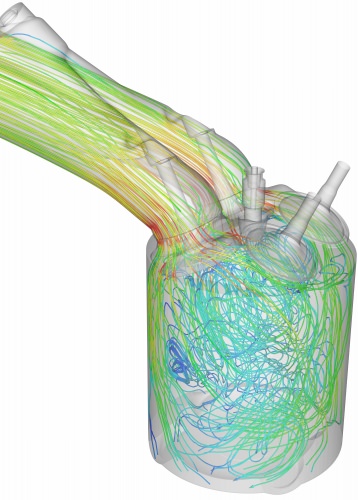 In this simulation of the intake stroke of a four-valve gasoline engine, CONVERGE software shows fastest gas velocity in red and slowest in blue. Intake valves, left, are open and the piston is approaching the bottom of its stroke. The spark plug, top center, is inside a pre-chamber that helps raise efficiency.

The analysis of the movement of gases and liquids is called computational fluid dynamics, or CFD.

Senecal and his fellow co-founders learned their skill studying with professors of mechanical engineering Christopher Rutland and Rolf Reitz, who had long experience with software spawned by the U.S. atomic bomb project to analyze and predict gas flow.

Senecal, who was born in Montreal, came to Wisconsin in 1991 and became fascinated by fluid dynamics while earning a bachelor’s degree in physics at Lawrence University. He says he was accepted at eight graduate programs. “Then Rolf called me. I already loved Madison, but the fact that he called me personally made the difference.”

For his doctoral work with Reitz, Senecal integrated CFD with engine design software. “CFD had been used for simulation,” he says. “They would run a case and see what they could learn from it, but there was no way to automatically incorporate the improvement into the design process.”

Senecal used a “genetic” approach that tested incremental changes, and then made changes that yielded a better outcome as the basis for the next change. “You have these criteria related to power, efficiency and/or emissions that you use to evaluate the design as it evolves, generation after generation, based on the principles of evolution through natural selection.”

CONVERGE, the company’s software package, uses that same genetic approach to eliminate flaws in existing designs or develop new ones, Senecal says. Many questions arise: “What is the best timing for the fuel injection? When should the spark happen? How do you inject fuel relative to the shape of the head, piston, valves and ports?” he says. “All these questions can be answered with modeling, and that’s a lot cheaper than shaping metal and testing every design.”

Running software that solves so many variables explains the large collection of computers in Convergent’s basement, where 3,500 processors are slaving at solving the complex equations at the heart of the software.

Senecal and fellow co-founders Keith Richards, Eric Pomraning and Daniel Lee, are all owners and vice-presidents of Convergent Science (which has no president). Another co-founder, David Schmidt, is a professor at the University of Massachusetts.

The company has 60 employees in Madison, and 20 others at offices in Detroit, Texas and Austria.

Convergent started selling engine-design software in 2008, when General Motors was on the verge of collapse. Even at that dark hour for the auto industry, the product was so good that CONVERGE shouldered its way inside the cylinder, the source of power in gasoline and diesel engines.

“Despite radical advances in the last couple of decades, there is still room for improvement,”

Ironically, Convergent competes with free, open-source software called KIVA, which Senecal and other founders worked on with Reitz and Rutland at UW–Madison. Although KIVA is still used in the industry (including a completely new design of Evinrude outboard motors), there are advantages to having a company to back up customers, Senecal says.  “People who used to use KIVA got sick of not having someone to call if there was a problem. With our products, you can pick up the phone and someone will help with an issue or a bug.”

Why, after more than a century of development, do internal combustion engines still need to improve? The ultimate driver, Senecal says, and the reason Convergent sees a bright future, is ever-tighter regulation on pollution and mileage. “Despite radical advances in the last couple of decades, there is still room for improvement,” he says.

Electric vehicles may some day take over the market, but cylinders and pistons will still be needed for the foreseeable future. “If we are going to continue to make internal combustion engines, we have no choice but to keep on improving.”

In just eight years, however, Convergent’s success has forced it to eye new markets. “Internal combustion engines are our bread-and-butter, we know them backward and forward,” Senecal says, “but we’re starting to get to the point of saturating the market, so we need to look at other applications.”

Fluid dynamics also describe events inside jet engines, catalytic convertors, pumps and compressors, he notes. In these cases, the combination of fluid flow and fast-moving parts “makes CFD hard if your expertise is analyzing fluid flow in a pipe, but pretty easy for us.”

The company started at the top, Senecal says. “The internal combustion engine is arguably the hardest problem in CFD. It’s got everything that can make CFD complicated: turbulent flow, a liquid breaking up into a gas, chemical reactions, heat transfer, and moving boundaries from the valves and pistons.”