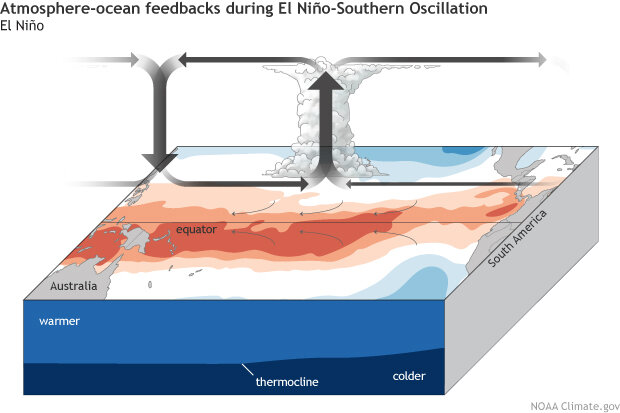 The atmosphere and ocean interact through exchanges of heat and momentum. When warm water and clouds move from west to east in the tropical Pacific during a climate event like El Niño, it changes the weather that happens on a global scale. Image courtesy of NOAA

For years, the prevailing belief among climate scientists was that Earth’s tilt was the primary factor in determining seasonal climate in the tropical Pacific. But new research from scientists at the University of Wisconsin–Madison and several other institutions around the world highlights an overlooked factor that has an equally important role: the “distance effect” of Earth’s orbit, which affects the planet’s proximity to the sun.

“You’d think that our understanding of the seasons is pretty well established. But right on the equator in the tropical Pacific, we have a lot of trouble simulating the seasonal cycle,” says Daniel Vimont, a climate scientist at UW–Madison and collaborating author of the paper.

He explains that closing this gap is important for understanding the tropical Pacific because it’s a critical region that influences the rest of Earth’s climate system.

For instance, it’s where El Niño occurs, a climate pattern Vimont describes as the biggest thing that can happen in Earth’s climate system on year-to-year time scales. During El Niño events, winds push warm water from the Western Pacific toward the Eastern, bringing with it warmer surface conditions, and decreased upwelling of nutrient-rich, cold water that affects what marine species can flourish where.

Since the ocean and atmosphere are also connected, when warm water and clouds move from west to east during a climate event like El Niño, it changes the weather that happens on a global scale, too. 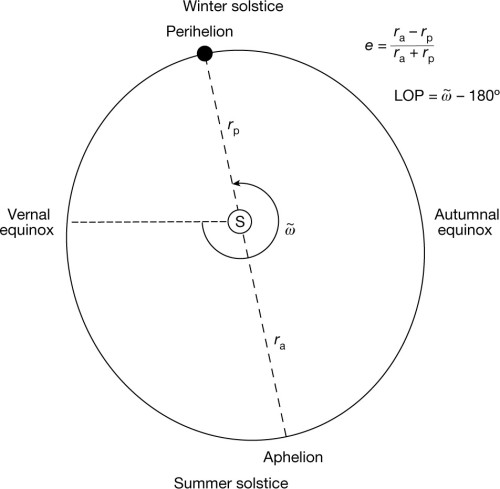 The Earth’s orbit around the Sun (marked S) is elliptical with the Sun at one focal point and with the closest approach at perihelion (at a distance rp) and furthest at aphelion (ra). Image courtesy of Daniel Vimont,

Vimont and his lab were already modeling this ocean-atmosphere connection when they were asked to join the study led by John C. H. Chiang of the University of California, Berkeley, which was recently published in Nature. The researchers revealed that both the “tilt effect” and the “distance effect” play equally important roles in influencing climate seasonality in the Pacific.

It just so happens that in the tropical Pacific’s current climate the two cycles are aligned, obscuring the full weight of influence the distance effect has and making it seem like the Earth’s tilt had an outsized role in determining the seasons.

For the study, Vimont used computer simulations to “break the physics” of the real world to model how the ocean and the atmosphere interact and influence the timing of the seasonal cycle in the tropical Pacific. He was also interested in determining what processes are vital to creating our climates.

By using models to toggle different processes on and off, climate scientists can get a sense for which processes influence climate. In this case, they found that the atmosphere and ocean pushing on each other is important in creating the climate on the tropical Pacific.

“That’s important because as we look back in the past, this new finding suggests we should revisit model simulations and paleoclimatic data that we use to infer past behavior of the tropical Pacific,” Vimont says.

These results provide a chance to test global climate model simulations of past changes to climate. While natural climate cycles caused by Earth’s orbit and tilt have long existed and influenced the planet, the changes driven by human influences since the start of the industrial era cannot be explained by these natural cycles.

Understanding how these human influences alter the Earth’s climate in the future is another focus of climate scientists. They use models of past climates to project and plan for the future, so improving scientific understanding of these models of the past is particularly important.

“This study is a great opportunity to push our understanding of the tropical Pacific, which we know affects the rest of the world,” Vimont says.

You can read more about the research in this story from UC Berkeley.