Kacie Lucchini Butcher, a public historian and award-winning museum curator who works with marginalized communities to tell their stories, has been hired as director of the University of Wisconsin–Madison’s Public History Project.

Lucchini Butcher will lead a multiyear effort to uncover and give voice to those who experienced, challenged and overcame prejudice on campus. 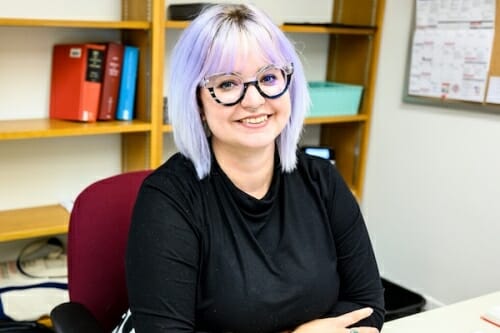 The project grew out of a campus study group last year that looked into the history of two UW–Madison student organizations in the early 1920s that bore the name of the Ku Klux Klan. The study group concluded that the organizations existed amid a pervasive campus culture of racism and religious bigotry that went largely unchallenged.

Chancellor Rebecca Blank commissioned the Public History Project as one of several responses to the study group’s findings. The broad intent of the project is to ensure that all students and alumni are aware of the full history of the university, including the accomplishments of campus community members from marginalized populations whose stories previously may have been hidden or not widely known.

“As we dig into this work, we’re going to need to have some difficult conversations about things that happened here,” Lucchini Butcher says. “Hopefully, in the end, it will lead us to a better place. What I can say with confidence is that it is very difficult for an institution to get to that better place if it doesn’t first confront its history in an authentic way.”

Lucchini Butcher will work with a Public History Project Advisory Committee led by Vilas Distinguished Achievement Professor of History Stephen Kantrowitz. Throughout the project, Lucchini Butcher plans to engage with students, faculty, staff, alumni and other community members. She expects to hire graduate and undergraduate students to assist with research.

“Collaboration is a huge part of my process,” Lucchini Butcher says. “This isn’t about the histories I want to tell. This is about engaging the community and finding a way together to tell the stories its members want to tell.”

Lucchini Butcher said there are varying views on the role and definition of a “public historian.” She thinks of it as a historian whose goal isn’t necessarily to publish academic research, but rather someone who works with communities to elevate their stories in an accessible way. The tools of a public historian can include exhibits, documentaries and walking tours, she says.

The exact form the Public History Project will take has not been decided, though Lucchini Butcher anticipates that it will include both physical and digital elements. A completion date for the project has not been set. Work has begun on the research that will underpin the project.

Lucchini Butcher is from La Crosse, Wisconsin, and earned a bachelor’s degree in art history from Augsburg University in Minneapolis. While working at the Denver Art Museum, she noticed how the institution, like many others, struggled to tell diverse stories. The issue motivated her to return to school. This past May, she earned a master’s degree in heritage studies and public history from the University of Minnesota. Her professional work has centered on institutional museum reform.

As a graduate student, Lucchini Butcher co-curated with fellow student Denise Pike an exhibit at the Hennepin History Museum in Minneapolis that explored the city’s history of racial discrimination in housing through the stories of three black families. Titled “Owning Up: Racism and Housing in Minneapolis,” the exhibit drew nearly twice the typical number of visitors for an exhibit at the museum. The exhibit has won numerous honors, including an Award of Excellence in August from the American Association for State and Local History.

“The search committee was particularly impressed that Kacie already had under her belt the successful completion of a project very similar to what the university is looking for,” says Brenda Plummer, a UW–Madison history professor and chair of the search committee. “She understood immediately the challenge of linking the historical work with the imperative to address current issues. She provided answers at the interview that indicated her interest in what the university is trying to do, as well as a road map to accomplish that work.”

The Minneapolis exhibit opened during a very heated and contentious debate about present-day housing policies in that city. For Lucchini Butcher, the community response to the exhibit showed that people desire historical context. She believes UW–Madison’s Public History Project can have a similar positive effect, informing and furthering current measures to make the campus more welcoming and inclusive.

“Something really important to me is showing that history is connected to the present,” she says. “History is not a specific place in the past. It weaves through everything we do every day.”

For updates on the Public History Project, including opportunities to participate and Lucchini Butcher’s blog, please visit the project’s website.