You’ve just left Dejope and need to catch a bus to your next class. It is clear that the sidewalk lining the edge of a field is where you’re supposed to walk, but your eyes and heart are set on a different path: a straight, quick, efficient line through the field.

Follow the sidewalk and you use the environment as the planners and designers intended. Cut through the field and you form what architects, design theorists, artists, philosophers and writers call a “desire path” or “desire line.”

Also known as “cow paths, pirate paths, social trails, kemonomichi (beast trails), chemins de l’âne (donkey paths), and Olifantenpad (elephant trails),” they are living histories of travelers wandering off pavement, forming shortcuts, carving their own trails and recreating their communities. You’ve probably seen them. Some are lightly imprinted across pristine lawns, others are deeply etched into them. They cut through grassy corners, form dirt trails over hills, trample diagonal lines from point A to point B, and, in the winter, are footsteps pressed into snow.

But desire paths are not inert histories. Once established, they influence how pedestrians use and interact with their environment going forward. To the dismay of some planners and to the fascination of others, desire paths are representative of the constantly evolving relationship between people and place. 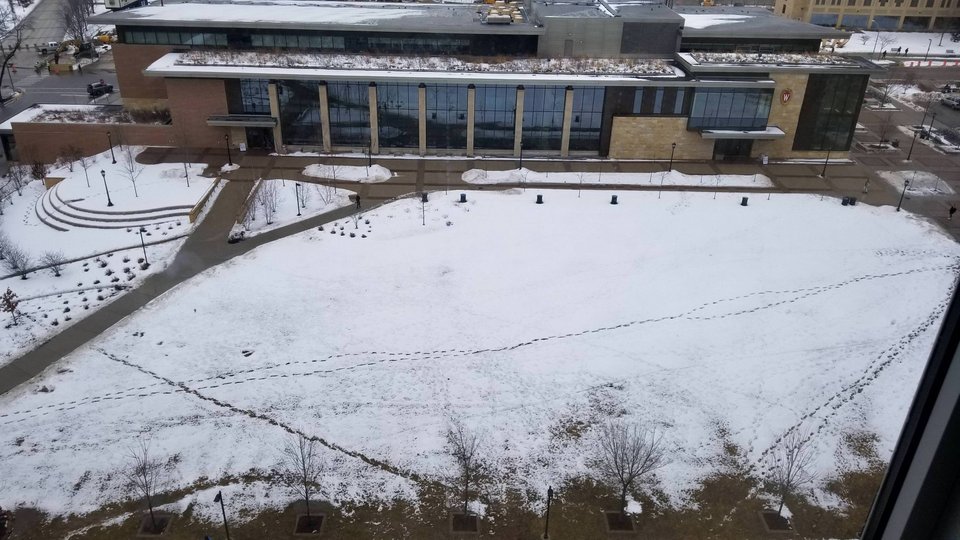 While campus planners at colleges like Michigan State University have decided to leave their campus’ unpaved, letting students form their web of desire paths and then subsequently paving over them, UW’s assistant campus planner Aaron Williams said the UW approaches the layout of the campus’ pathways through holistic, contextual planning.

“We try to get it right the first time,” Williams said. “There’s a fine balance between paving the entire campus and having green space.”

To find that balance, the division of Campus Planning & Landscape Architecture, which Williams is a part of, start by determining where prominent, heavily trafficked areas will be on campus. These pedestrian generators are typically parking locations, including car and moped lots as well as bike racks, metro stops, large lecture halls, student housing population centers, and main entrances and exits to the building. From there, they try to connect these places and trace the likely routes, relying as much on human instinct as comprehensive planning experience.

A challenge unique to universities, however, is the pedestrian oriented nature of the campus and the class change schedule that the campus operates under. Students, Faculty, Staff, and visitors are all pressed for time at a point when everyone is trying to get somewhere. As humans we figure out how to make our environments ‘better’ for us, which might include creating a path of least resistance. It would be easy to blame any and all desire paths on students, but it’s the common denominator of human nature that tends to be the initiator.

Williams said people create desire paths for three primary reasons: time efficiency, experience, and resistance, in the sense that why would I do ‘X’, if I could do ‘Y’. 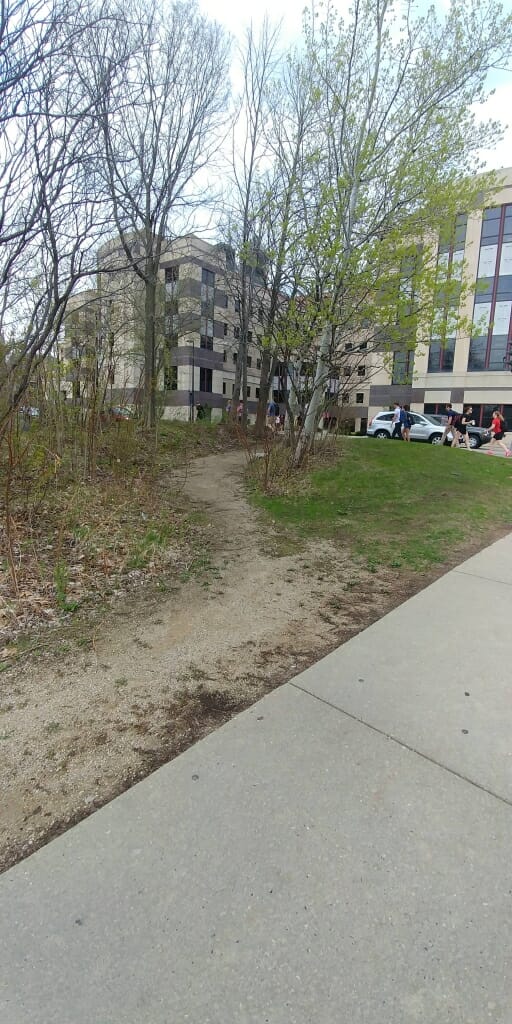 First, as in the Dejope example, a student enrolled in a jam-packed, time-sensitive schedule may create a desire path because it is quicker and more efficient. The photographer Jan Dirk Van Der Burg has a large collection of this type of desire path, saying that “splendidly laid pavements, traffic-safety barriers and idyllically organized pedestrian areas are avoided with sober insight” and that “desire lines are tangible proof that people do not allow themselves to be straitjacketed in public space and that they only have one goal: to find the shortest way from A to B.”

Dirk Helbing, a German physics and math professor, studied trampelpfads – the German word for desire paths that combines the word “trample” and “path” – and discovered a human constant: that travelers will form a desire path if the prescribed route is 20 to 30 percent longer.

“They are very consistent in that, as they do so on stretches that are only ten meters (30’) long,” Helbing said. “This creates amazing mini-shortcuts, as you can see them in parks, where people prefer to walk four steps through the meadow rather than take a slightly longer path.” 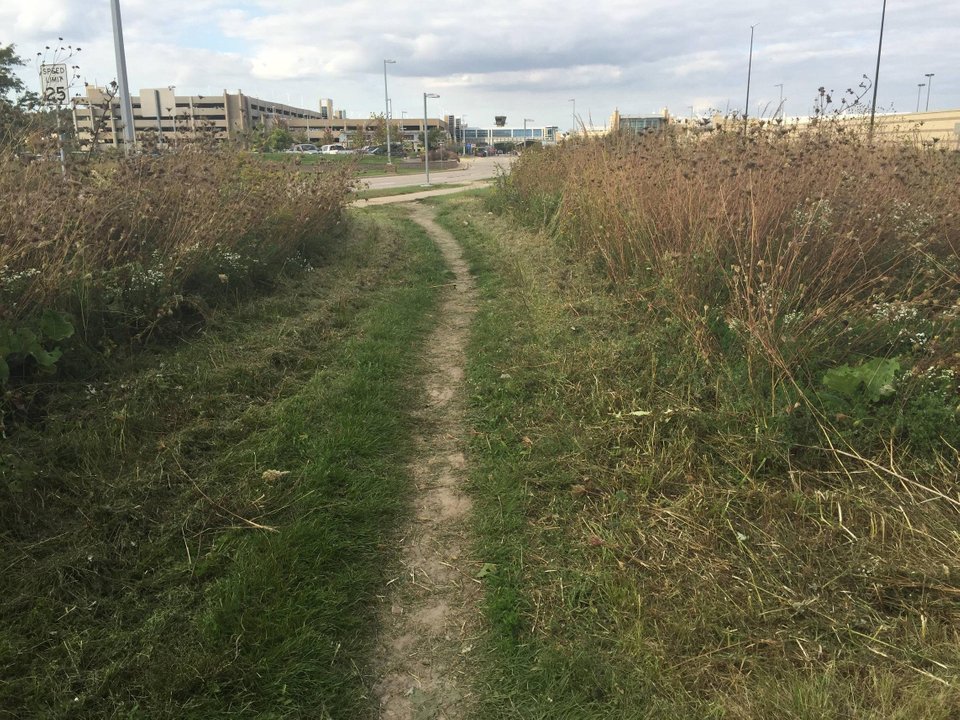 Once this type of trail is established, Helbing said it develops an “attraction effect,” whereby humans create a trail, in turn attracting people to the trail, which then deepens the trail even further, and so on. It is an example of a what he calls a spontaneously formed common good, something that benefits everyone without anyone having to interact directly with anyone else.

Many of the roads we drive our cars on today were once old trade routes oriented along the quickest cross-national routes, Helbing added, meaning even in our cars we are following the desire paths of others. Broadway, following the “Native American-made Wickquasgeck Path, which is thought to have been the shortest route between pre-colonial settlements in Manhattan that avoided swamps and hills,” is believed to be the oldest desire path in the U.S.

Second, a student may create a desire path because of an experiential reason, like wanting to walk closer to a certain tree or through a beautiful landscape setting, which can be detrimental to the ecology of a site in its own right.

This type of desire path is reflected in the writings of Rebecca Solnit, whose book “Wanderlust” documents the history of walking and its connection to culture and politics. It is through the act of walking that people can escape their “series of interiors – home, car, gym, office, shops,” she writes. And it is through desire paths specifically that walking as “a mode of making the world as well as being in it” takes on a literal meaning.

Third, people may create a desire path purely out of a spirit of resistance.

“‘I’m capable , I can get from point A to point B, why not?,’” Williams imagined this type of person thinking.

An academic journal says desire paths “record collective disobedience.”  Whereas cows and dogs and horses may also form desire paths, disobedient desire paths are uniquely human landmarks of an attitude that says, “I will not use this space as intended.”

When a desire path develops on campus, Williams said planners and landscape architects have a number of methods to accept or correct the circumstance. They can either create an ‘official’ path along it acknowledging the human desire, insert an impediment to the alignment, or modify the topography to create both a sense of effort and distance to discourage the path.

Bascom Hill, for instance, could have been a space scarred by desire paths, Williams said.

“Whenever you have a large, open green space surrounded by public [campus] buildings and you put in orthogonal paths – or paths that are 90 degrees to each other – you’re asking for corners to get clipped or diagonals to form,” he said. 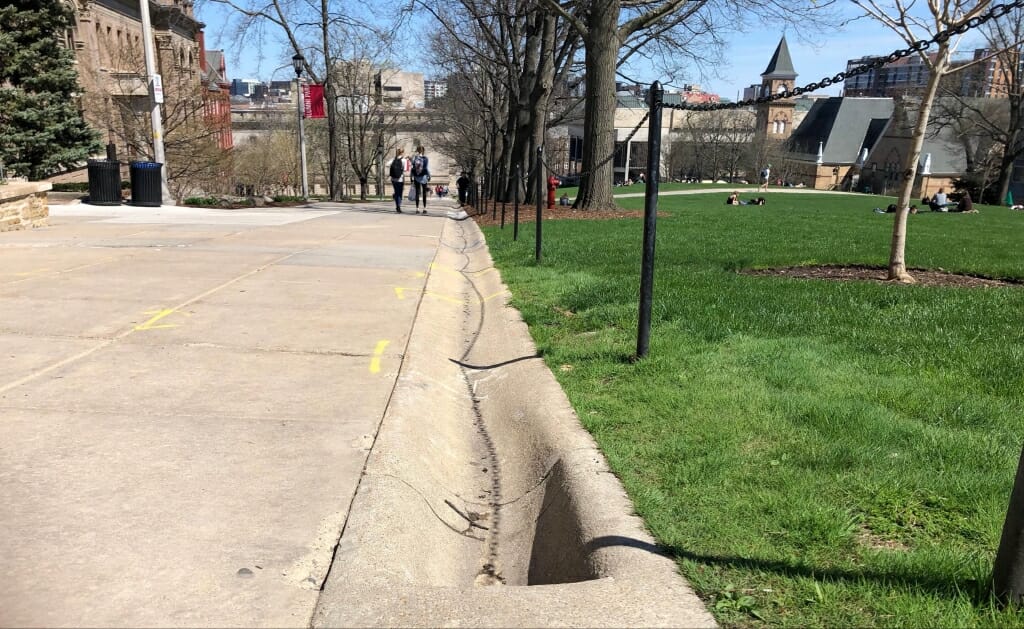 A runnel and chain-and-link running along the interior edges of Bascom Hill prevent students from forming desire path across its grass. Parker Schorr 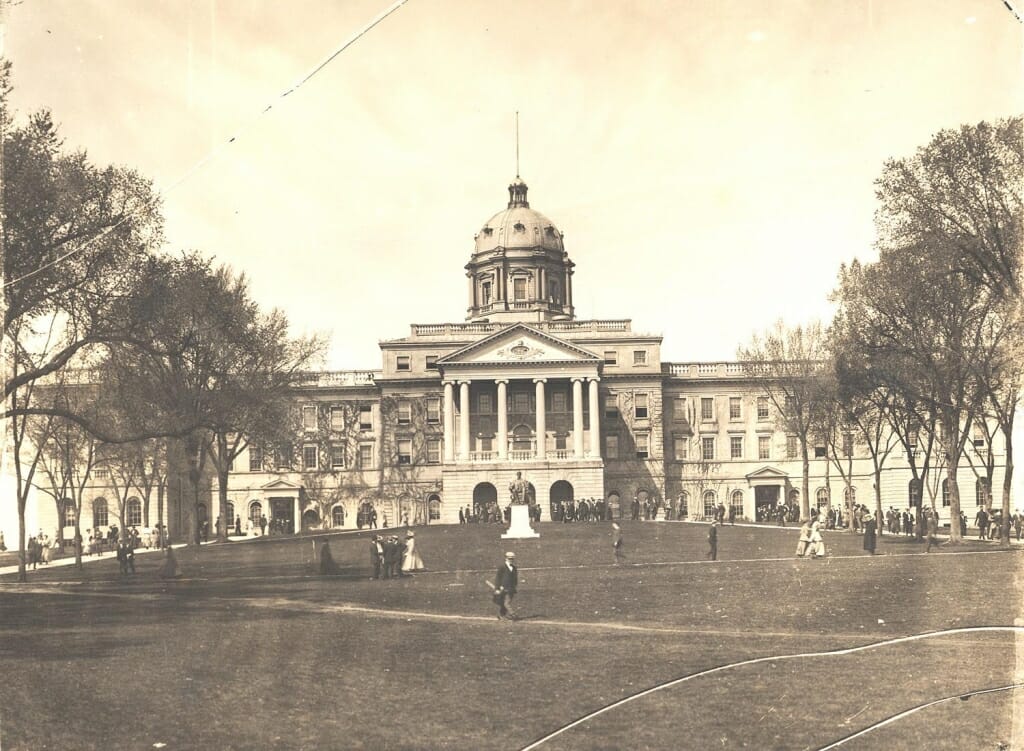 To prevent these paths from forming, there are a series of subtle design elements that can be implemented. The rain water runnels along the inside of the primary sidewalks help to encourage parallel movement to the quad while the green space itself forms a hump, meaning that a diagonal route would actually take more effort that just sticking to the sidewalks. Finally, in a more traditional campus solution, landscape planting beds and post-and-chains are installed to act as vertical hindrances, which cordon off parts of the hill’s lawns from would-be desire path creators.

But desire paths are not simply objects of amusement; they can also be disrespectful and dangerous.

A number of desire paths formed at the top of Observatory Drive which cut across portions of the existing effigy mounds. Historically, this was a classic desire path that was eventually made permanent with a sidewalk. For the most part these paths have been removed, but the damage was already done to the cultural resources, Williams said.

Within the Lakeshore Nature Preserve, people are asked to stay on the designated paths out of respect for the sensitive ecology of the area. Other desire paths are invisible because they are paved, like the places where people cut across streets, through busy intersections, and alongside railroad tracks, making them harder to recognize and fix. Although not desire paths in the sense of leaving a mark, they are no less important in understanding the movement of people.

Williams said the university installed “staples” – the metal barriers that are too short to comfortably squat underneath and too tall to easily hurdle over – along University Avenue to prevent people from crossing and increase safety. Campus planners and landscape architects also have a long-term plan to provide a safer, alternative route for people that travel alongside the railroad tracks that cut a straight line from Union South to the Southwest Commuter Path toward the Kohl Center.

But desire paths are hard to stamp out completely. Reflected in many of our most popular idioms and terms – “shortcut,” “following in one’s footsteps,” “blazing a trail,” and “creating your own path” – is a rooted human desire to leave our imprints on the world and to travel along paths that are not set in stone.

Even Williams, a campus planner and landscape architect whose job includes working with campus staff in both preventing and erasing desire paths, will occasionally find himself using one, for the experience and understanding of course – and to limit exposure in a polar vortex.