Dalai Lama and UW expert share message of hope, determination, and “education of the mind” 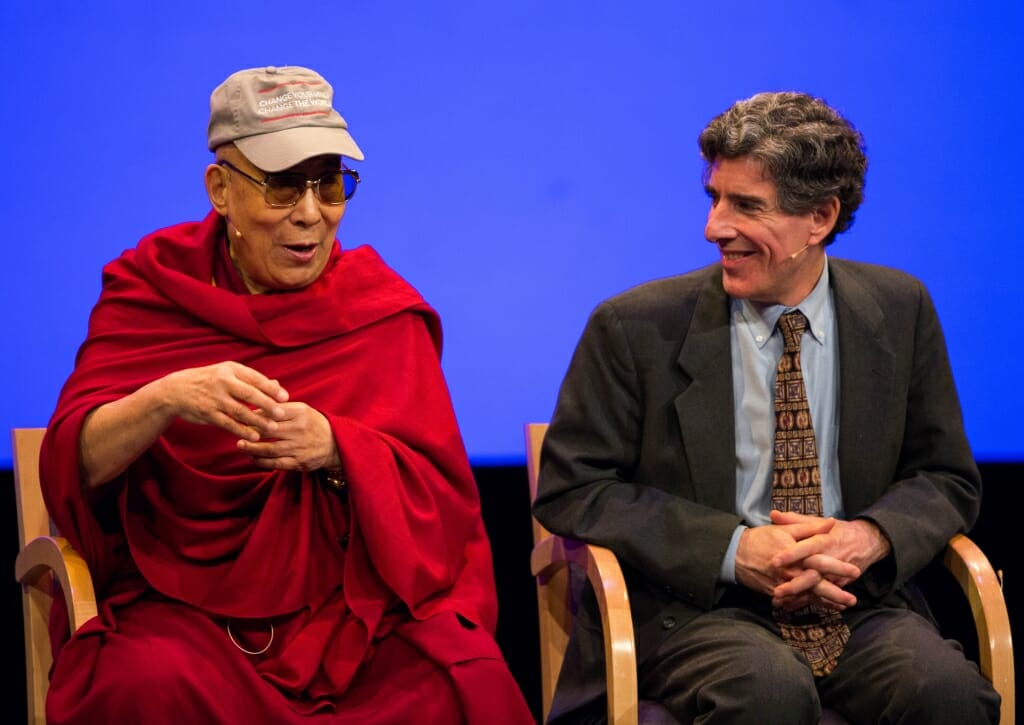 The Dalai Lama, left, appears on a panel with UW–Madison professor Richard Davidson at a 2016 event in Madison. Photo by Darren Hauck

(Editor’s Note: The ABC News interview took place before the recent protests against police brutality; the Dalai Lama comments on the protests here.)

Humanity has an opportunity to transform negative emotions like fear and anxiety into determination and compassion for others, according to His Holiness the Dalai Lama. This message of hope is front and center in the Dalai Lama’s recent video conversation with Dan Harris, ABC News anchor and co-founder of Ten Percent Happier, and Richard Davidson, University of Wisconsin–Madison professor and founder of the Center for Healthy Minds.

“We are human beings. We are social animals,” the 14th Dalai Lama told Harris and Davidson over video from Dharamsala, India. “Obviously our own experience of constant fear and constant anger destroys our inner peace. More compassionate feelings bring inner strength and inner peace… Helplessness – that’s a failure… our own cost.”

The conversation comes at a time when many people around the world are experiencing unprecedented loss, hardship and isolation. Amid the recent events such as the COVID-19 pandemic, the World Health Organization has warned that a global mental health crisis is likely to follow, and many thought-leaders like the Dalai Lama, Harris and Davidson are sharing insights and tools to promote emotional well-being.

For the past 28 years, the leader of Tibetan Buddhism has partnered with scientists, including UW–Madison’s Davidson, to inspire research on how people can alter their thinking, emotions and behavior toward a kinder, wiser, more compassionate world. Davidson is well-known for his scientific work unearthing the impacts of meditation and other prosocial qualities such as compassion on the brain.

Such evidence – along with other research generated by the scientific community – has fueled the Dalai Lama’s promotion of “secular ethics,” which are altruistic values deep-seated in human nature that anyone can nurture, regardless of background or religion. The Dalai Lama described mental training, including meditation practice, as a transformative tool that can not only sharpen the mind, but also increase people’s altruism and compassion toward each other.

The Dalai Lama and Davidson have explored how these practices can best serve others and how every human being shares the same wish to be happy and to be free of suffering. Davidson says his aspiration is that someday, mental exercise of this kind will be as commonly practiced as brushing one’s teeth. If people took just a few minutes each day to nurture positive qualities of mind, the world would be a very different place.

This is one reason why the Dalai Lama thinks a new form of education is needed that focuses on the mind, emotion and a person’s inner world. Often these insights are outcomes of practicing various forms of meditation, and there are numerous tools available online to practice mental training, including Davidson’s Healthy Minds Program (led by the nonprofit he founded Healthy Minds Innovations) and Harris’ meditation platform Ten Percent Happier. Both mobile apps have been offering free meditation practices and mental health tools during the pandemic.

In addition, grief and other negative emotions have overwhelmed many around the world. Harris, who lives in New York City, which has been particularly hard-hit by COVID-19 in the United States, reflected on the different ways grief can take shape. Because of the risks of coronavirus to others and the number of people sick, many people are unable to say goodbye to loved ones. Millions of others are also grieving about losing their previous life, which has been upended by the pandemic.

How can the world process such grief?

The Dalai Lama reiterated that despite the deep sadness, there are glimmers of hope and opportunities to expand care for the whole world.