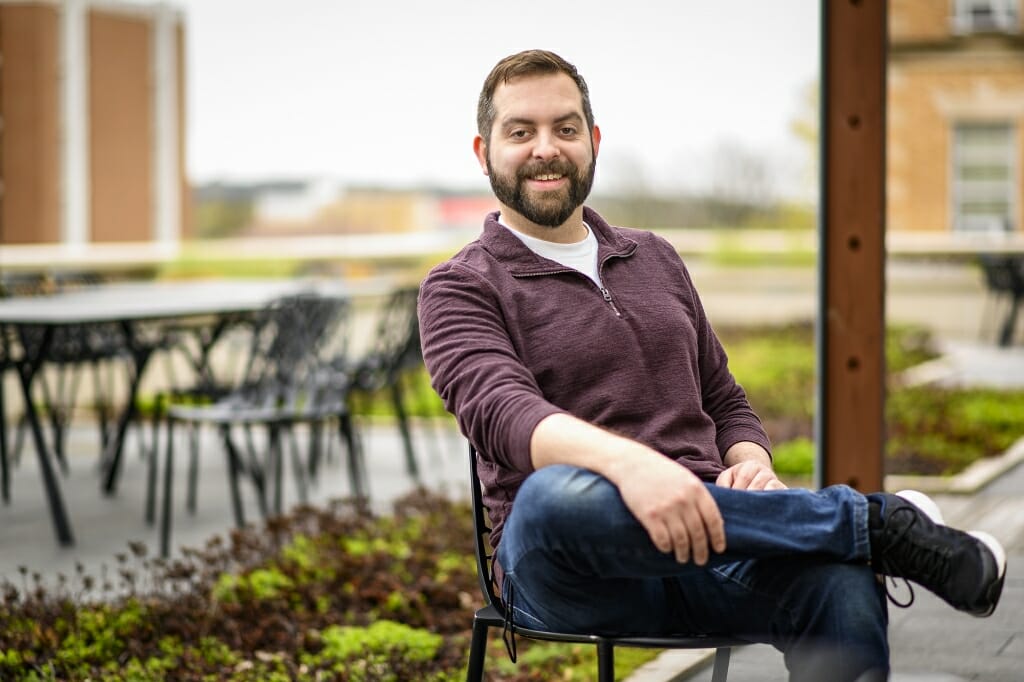 Nicholas Jackson had many starts and stops in his college degree, but on May 11 he’ll get his bachelor’s degree in retailing and consumer behavior. He has the honor of carrying the flag for the School of Human Ecology during the opening procession. Photo: Bryce Richter

Nicholas Jackson considers himself a storyteller — he once spent five years filming a movie about zombie crime fighters.

Now, at 33, he’s the hero of his own story, one even longer in the making.

After setbacks, hardships and false starts, Jackson will graduate May 11 from the University of Wisconsin–Madison. He will be earning a bachelor’s degree in retailing and consumer behavior with a certificate in studio art.

It’s an outcome that seemed implausible just a few years ago. Yet Jackson kept recalibrating. And readjusting. And reimagining.

“I’m more and more accepting that what I have to say might be hopeful to other people,” he says. “It means a lot to me that my story could inspire other people or help them appreciate what they have.”

Born in Arizona, Jackson moved often with his family growing up, landing in Madison at 15. He and his sister were the primary caregivers for their single mother, who was ailing from Muscular Dystrophy. At Madison West High School, he felt like a loner going through an existential crisis.

“As my mom’s condition worsened, it was hard to see the point in doing anything,” he says. “It felt almost like living a double life. You put on this face and do what you’re supposed to be doing outside the home. And then you come home and it’s not normal. It can be tough to carry that around. It can eat you up.”

Jackson dropped out of high school at 17, earned a high school equivalency diploma, and began working low-paying jobs. At 18, he enrolled at Madison College. The first semester, he failed one class, got an “incomplete” in another, and quit.

“I figured my path to higher education was over,” he says.

More low-paying jobs followed. In his free time, he threw himself into writing, directing and starring in a feature-length film. Shot locally for $14,000, “The Zombie Hero” played a couple of film festivals and earned $30.

“It’s a terrible movie,” Jackson says. “But I finished it, and that was important to me.”

His mom was proud, too. Though she died before the movie was completed, she had business cards printed for her son that read, “Filmmaker.”

At 25, Jackson began seeing a behavioral therapist to address several issues, including tics related to Obsessive-Compulsive Disorder. He’s upfront about this part of his story, he says, because he wants to reduce stigma around mental health challenges.

The therapy helped, and other things began to fall into place. He met the woman who would become his wife, and he witnessed his sister successfully return to school at UW–Milwaukee.

He convinced Madison College to give him another shot. This time, he aced it, raising his GPA to 3.7. (That “F,” still on his transcript, kept it from being higher.)

Also around this time, he started an online business, “The Seedy Merchant,” selling handmade goods and art, including his own. He got accepted to the UW School of Business — a huge achievement.

“I had lived in Madison since 2000, but I was always on the periphery of the university,” he says. “I had always felt like an outsider, so it felt very good to actually become part of its legacy.”

The feeling wouldn’t last. The School of Business wasn’t a good fit, he says. He withdrew after 10 weeks — another blow to his self-confidence.

He decided to take a semester off and examine other majors. He found the School of Human Ecology and its Consumer Science Department, as well as the certificate in studio art. All of it spoke to his creativity and collaborative nature.

“This was a perfect pairing for me,” he says. “My whole life, I had been interested in making things and selling them.”

On May 11 at Camp Randall, Jackson will earn a degree he once thought impossible. In recognition of his accomplishment, he is being accorded the honor of carrying the flag for the School of Human Ecology during the opening procession. His wife, father and sister are among those planning to attend.

Two days later, Jackson will begin a full-time job as an event planner in the marketing department with American Family Insurance. He’ll be based at the company’s Madison DreamBank location, where he currently interns.

“Our whole goal is to help people figure out their dreams,” he says. “It’s another way I plan to use my story. I want people to know that everyone has potential, and that it’s a matter of finding the right fit, admitting when it’s not the right fit, and not being afraid to try new things.”

The title on his business card this time: “Dream Curator.”