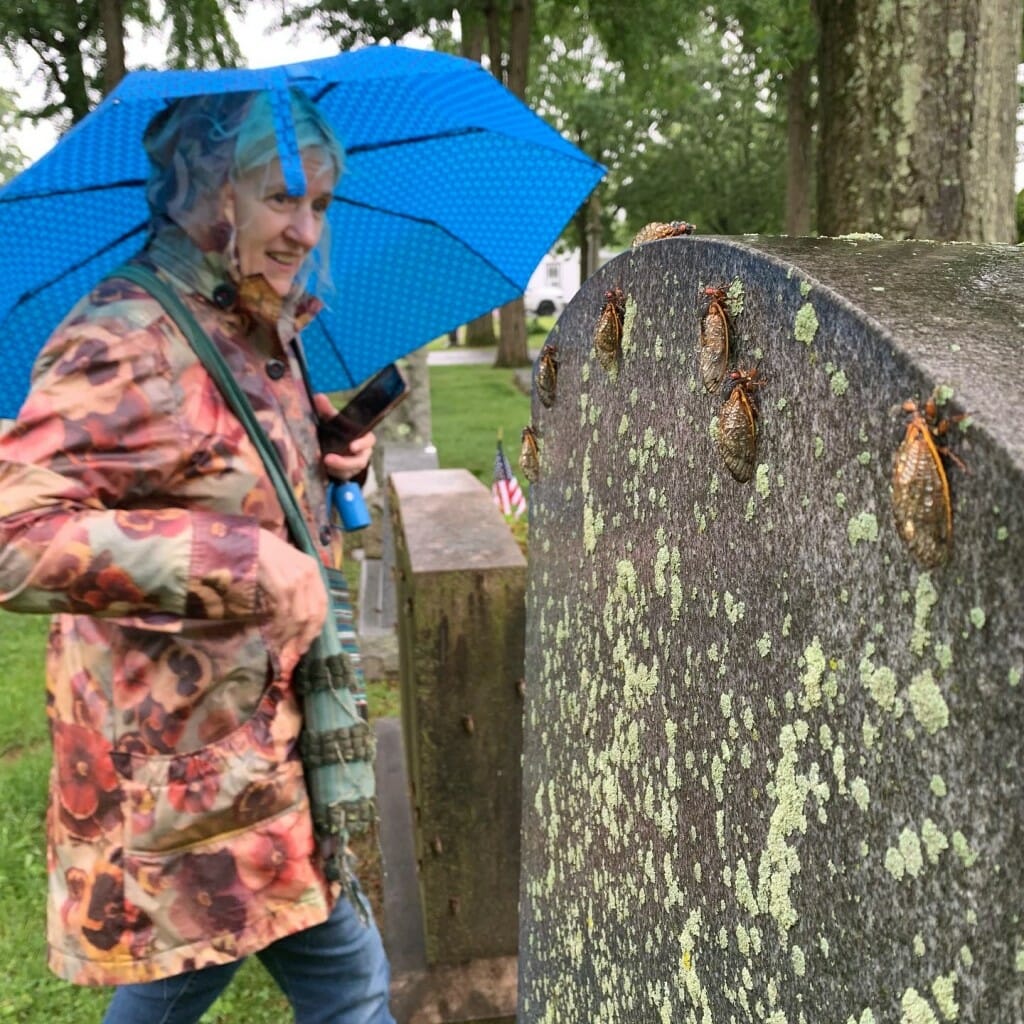 “Seeing so many cicadas at one time was a once-in-a-lifetime experience which I feel I will remember my whole life,” Jennifer Angus says after seeing Brood X near Princeton University in June. Contributed photo

“Yes, cicada babies are about to start falling out of trees”

“Cicada Invasion: It’s the Beginning of the END”

The foreboding headlines started back in April, warning that after 17 years underground, billions of periodical cicadas would emerge in late April or early May. But while news of Brood X had people in a panic, for Jennifer Angus it was artwork to her ears.

The professor in the Design Studies Department of the UW–Madison School of Human Ecology has created “Magicicada,” an exhibit that opened July 10 at the Staten Island Museum in New York and can be seen through May 22, 2022. It is named for the genus of seven species of periodical cicadas which emerge out of the ground in remarkable numbers every 13 or 17 years. Angus has designed exquisite, ornamental patterns and imaginative vignettes using — you guessed it — cicadas. 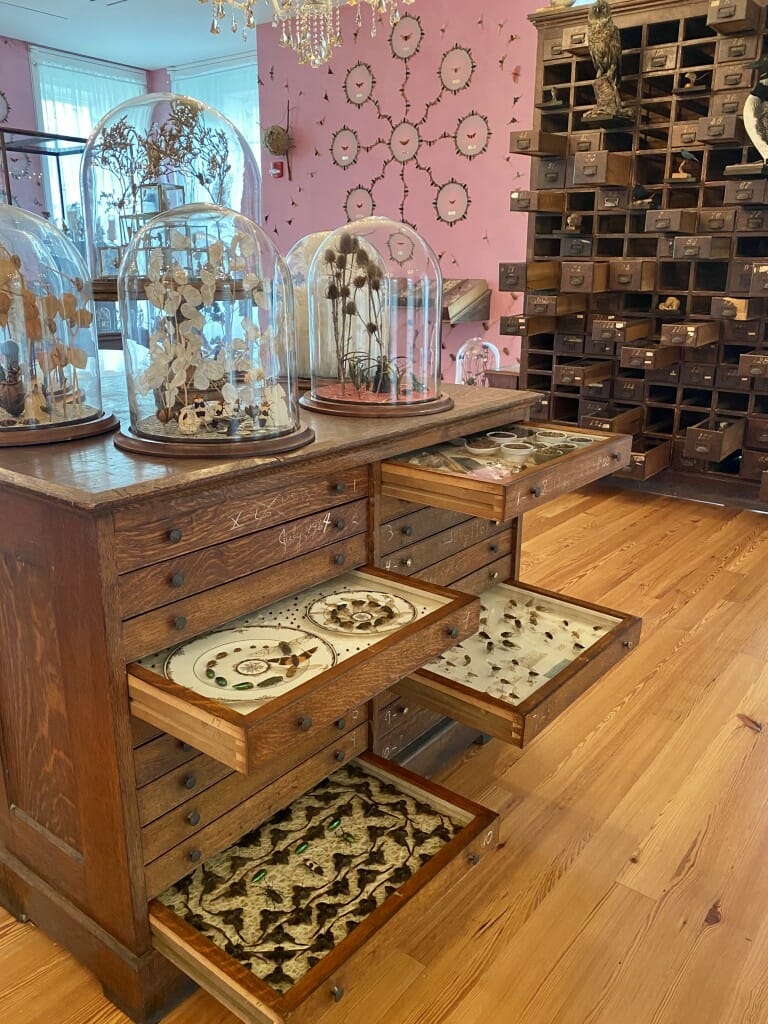 While certain exhibition pieces, such as the large cabinet of curiosity with 170 drawers, have been constructed ahead of time, a lot of the work or the making is done on site. 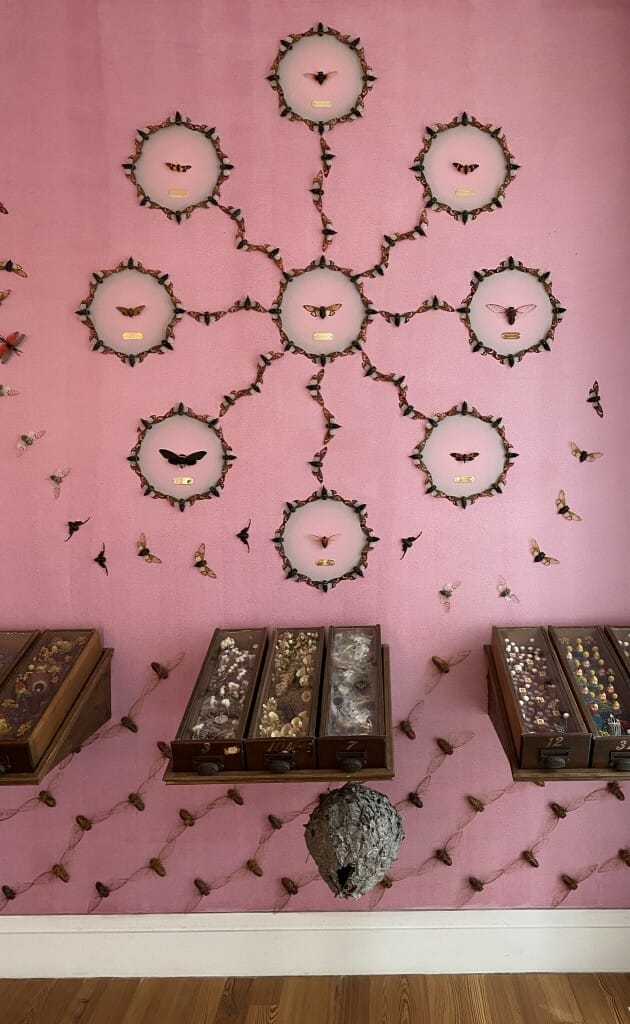 The perimeter walls of the gallery are painted with a lac (the insect from which shellac is derived) infused paint and glaze. 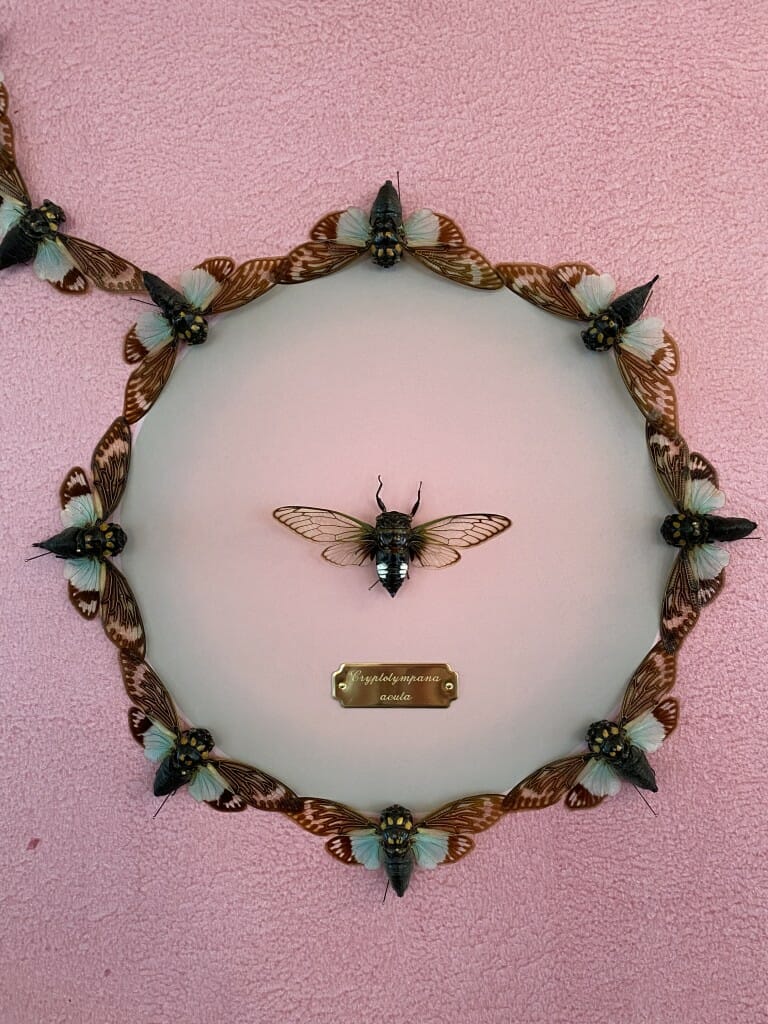 This beauty is called Cryptotympana acuta, a genus of cicadas from Southeast Asia.

“This exhibition celebrates not just cicadas but all insects, ‘the little things that run the world’ as described by renowned biologist E. O. Wilson,” says Angus, whose work has been exhibited internationally, including in Australia, Canada, France, Germany, Japan and Spain.

Have you worked with cicadas before? If so, WHY? (Let me rephrase that — what do you see in cicadas that many/most of us don’t?)

Cicadas, unlike other winged insects such as butterflies and moths, are very hardy, relatively speaking. They stand up to the wear and tear of repeated use since I reuse and reuse the insects from exhibition to exhibition. They’re also relatively plentiful and they’re an insect that most people have probably not thought about as being beautiful before. Given the opportunity to see a cicada up close, one could appreciate the delicacy of the veins in their wings, and if they’re a tropical species, they’re often bright colors. Thailand has the world’s greatest diversity of cicadas and you can find species that have blue, green, orange and black wings. There is also great variation in size between species. Personally, I find them fascinating!

When did you start work on this exhibit and what was the process? We often think of artists bringing their artwork to museums, but that’s not the case here, is it?

The exhibition has been in development for about two years. The Staten Island Museum is devoted to the history, environment, culture and the people of Staten Island. One of the founders of the museum, William T. Davis, was particularly interested in cicadas and amassed what is considered the second largest collection of cicadas in the world. Going into the development of the exhibition I knew that I had to celebrate the cicada to not only honor one of the museum’s founders, but also to celebrate the emergence of Brood X this summer.

I was fortunate to make a site visit to the museum in April. The Staten Island Museum’s entomology collection is housed off-site in the attic of what was the original location of the museum … in (a) wonderful space that seems like something out of a Charles Dickens novel. While I was there I was permitted to open as many specimen boxes as I wished besides touring other collections — wet specimens in alcohol, taxidermy, study skins, geology, botany and of course art.

I also returned to the East Coast in June to witness the periodical cicadas of Brood X in the vicinity of Princeton University. Seeing so many cicadas at one time was a once-in-a-lifetime experience which I feel I will remember my whole life.

While the exhibition is well-planned in advance and certain pieces, such as my large cabinet of curiosity with 170 drawers, have been constructed in advance, a lot of the work or the making is done on-site. I spent two weeks installing the exhibition with the help of my assistant Veronica Pham and museum staff. 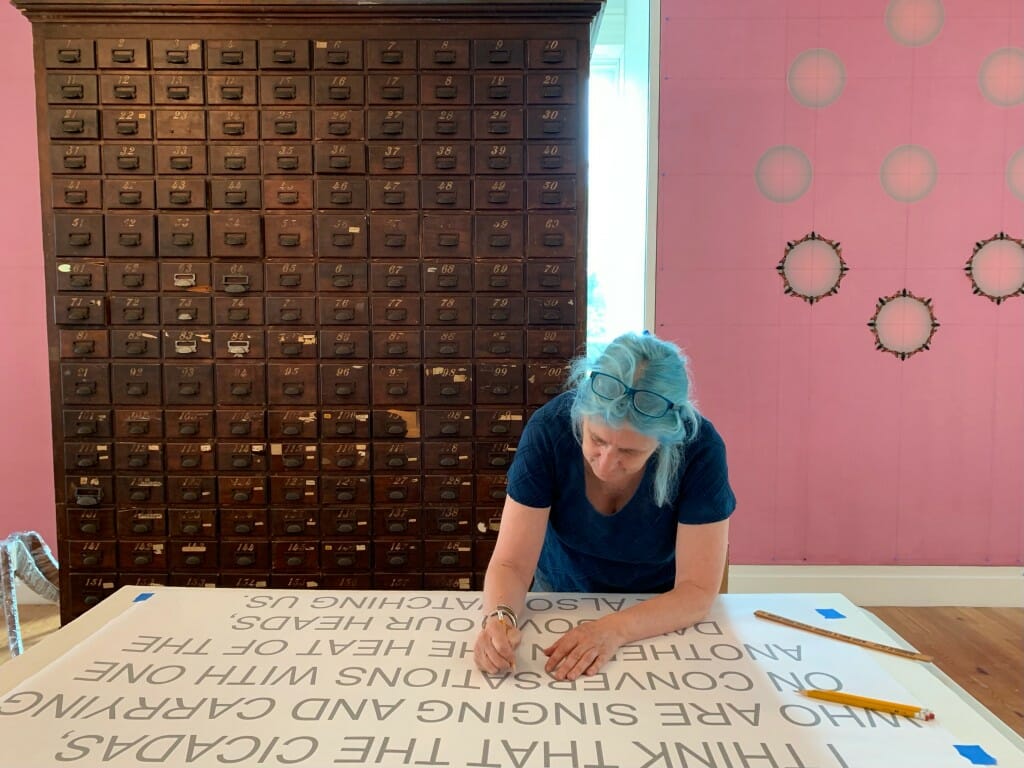 Are there any particular challenges working with cicadas? And conversely, anything that makes them especially great works of art?

For the most part, cicadas are a very easy insect to work with. Unlike butterflies and moths that have scales that are easily disturbed when you touch their wings, this is not true of cicadas. As with any insect, there is considerable work involved in preparing them to be mounted on the wall. Typically, they come with their wings closed, placed on a piece of cardboard and wrapped in plastic. They have to be “relaxed,” which essentially means rehydrating them and then spread and pinned into position. This is a time-consuming activity but compared to other insects, such as grasshoppers or beetles, they don’t take quite so much time.

How does one become an insect artist? Do you remember your first piece?

I don’t see myself as an insect artist so much as an installation artist; insects just happened to be my main material. I became interested in insects through my research in textiles. I was working in the area known as the Golden Triangle in northern Thailand, researching tribal minority dress. I came upon a garment, a shawl actually from the Karen tribe, and upon its fringe were strung green metallic beetle wings. Somehow I had never encountered these beetles before. Other than butterflies, I had never thought of insects as being beautiful and I found it hard to believe that the shiny blues and greens of those jewel beetles were real. Pretty soon I was hooked. I always say that I have magpie tendencies. I like shiny things!

My first large-scale installation with insects was in a downtown Toronto storefront gallery. I had installed weevils in a delicate repeating pattern. I could hear people looking in through the window and commenting that they could see there was a new wallpaper but they couldn’t see the art. They entered the space and walked up to the wall, and then literally took a step back as they realized what they were looking at. They thought they were approaching a wallpaper but then discovered that that pattern was composed of insects. 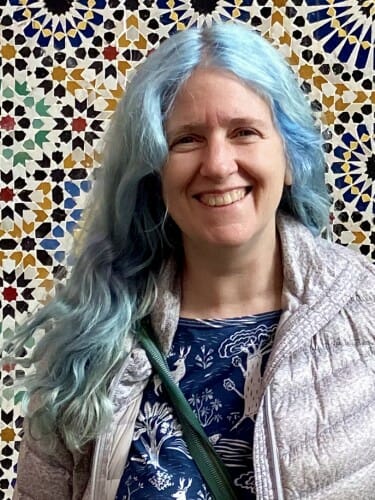 Are there bugs that make you squeamish? Or favorites you enjoying working with?

I’m not a big fan of dobsonflies, primarily because to me they look nightmarish with their long pinchers and grey wings, but I’m sure they’re quite harmless.

People frequently ask me what my favorite insect is and that tends to change from exhibition to exhibition. Of course at the moment I’m excited about cicadas but I’ve always liked a katydid from Thailand called Sania intermedia because it looks like its wearing a ballroom gown. So elegant! I also work with a weevil from Papua New Guinea called Eupholus bennetti. They remind me of schnauzers with their long snout. They seem friendly.

Can you talk a bit about the ethics of working with insects and why it’s important?

None of the insects I use are endangered. The vast majority of insects on the endangered species list are there because of loss of habitat, not over-collection. The insects I use are farmed or collected by local indigenous peoples, providing them a livelihood. Since most of these species come from a rainforest enviornment, the people collecting will not cut down the jungle which provides their livlihood.

While collecting insects is ecologically sound if done in a thoughtful manner, that unfortunately is not always the case. A number of butterflies and some beetles are now being farm-raised with the express purpose of marketing to collectors. When I am able to use farmed insects, I do.

Many people who visit my exhibitions were never aware that such unusual insects exist. I hope that my exhibition will get them excited and perhaps they will be motivated to get involved with one of the many rain forest preservation projects out there. I would also like people to think about their own environment and behavior. How is urban and suburban encroachment affecting wildlife big and small in your neighborhood? It is easy to take up the case of larger mammals, birds and fish, but what about smaller creatures who have an important role in the ecosystem?

People generally are accustomed to thinking of insects as pests, not art. What do you hope people see or learn after seeing your work?

I have often made a connection between my work and children’s literature because curiosity, imagination and magic are key ingredients. Interestingly, as children become adolescents and then adults, insects become dirty and repellent. Yet I have witnessed many times over that those who take the time to visit one of my installations often walk in and say, “Wow!” For a moment, they experience the wonder they felt as children.

I also hope that people will consider insects in a new way. These days I really see myself as a friend or “ally” to insects. Seventy percent of the food we consume is the result of insect pollination. The world is starting to wake up to the devastating tragedy that awaits us all if colony collapse — the death of millions and millions of honeybees — goes on unabated. The role of insects in decomposing matter is not to be underestimated, either. Our world would become a massive trash heap without insects and the human race would no longer exist.

O.K., so can you tell us three good things about cicadas? Or even one? Any misconceptions you’d like to clear up?