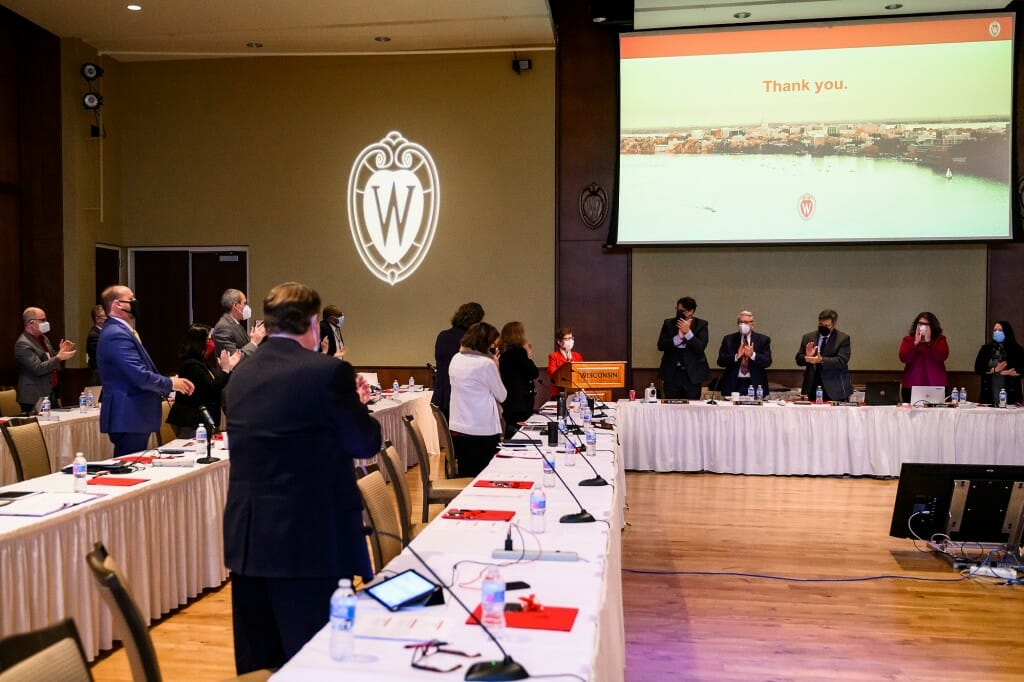 Members of the UW System Board of Regents give a standing ovation to UW–Madison Chancellor Rebecca Blank following Blank’s final address to the board. Blank will depart at the end of spring semester to become president of Northwestern University. Photo: Jeff Miller

In her final address to the UW System Board of Regents, University of Wisconsin—Madison Chancellor Rebecca Blank urged the audience not to take the success of the state’s flagship university for granted.

View a PDF of the Chancellor’s PowerPoint Presentation

“If we aren’t working every day to maintain and grow this quality, it will start to erode.  Maintaining quality requires maintaining the support of the state and its citizens,” Blank said at the Feb. 10 Board of Regents meeting. “As a public institution, top-quality research universities require bipartisan support across administrations, parties, and political environments.” 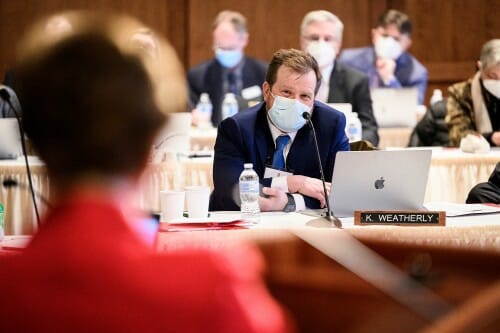 Blank, who has led UW–Madison since 2013, announced last fall that she would be departing the university at the end of the spring 2022 semester to become president of Northwestern University.

Blank detailed some of the accomplishments over the last nine years, including expanding the quality, size, and diversity of UW’s student body, while also improving financial aid and access.

The number of National Merit finalists enrolled at UW–Madison has more than doubled since 2013, while at the same time freshman applications have grown from 30,000 to 60,000 over that span. Blank said the university has been able to expand out-of-state enrollment with the help of revisions to the enrollment policy adopted by the Regents.

“These students add diversity and pay tuition at a rate that supports our programs and subsidizes our in-state students,” she said. “This has been particularly important during a period when in-state tuition has been frozen for nine straight years.”

Bringing bright, young scholars to Wisconsin is particularly important as the number of high school graduates in the state shrinks due to demographic changes, Blank said.

“We’re working hard with Wisconsin employers to keep our students here after graduation by showcasing all the reasons to stay and work in this state.” 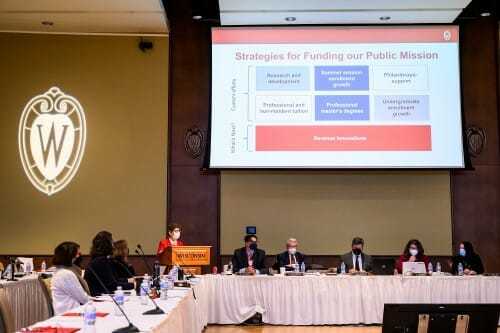 At the same time, the university is enhancing campus life and serving students better than ever, with expanded advising and mental health services, new health/wellness facilities, and new majors that reflect the needs and interests of students and employers.

Efforts to expand the diversity of faculty have also been successful, Blank said. Over the last year, 31 new faculty of color joined UW, and 243 joined over the last five years.

In addition to making strides in education, the university has also grown its research mission, bringing in nearly $1.5 billion in funding.

Key to pursuing those dollars is having top faculty in those in-demand disciplines, Blank said. Since 2018, a cluster hire program has allowed the institution to hire groups of 3-4 faculty in key areas of emerging research interest.

The efforts are paying off, Blank said. Industry dollars flowing into UW–Madison from corporate partners, which support not only research but also student scholarships and public service projects, increased by 60% between 2013 and 2020.

“We expect continued growth,” she said.

One example of the critical need for growth in both educational programming and research is in computer sciences. In 2019, the School of Computer, Data and Information Sciences (CDIS) was created to respond to extraordinary demand from students, employers, and industry partners. Computer sciences is now UW’s top major, jumping from 300 undergraduate majors five years ago to 2,100 presently. A major fundraising campaign is underway to fund a new building for the school.

All these accomplishments have required significant resources, Blank said. A greater emphasis on fundraising has been important to the efforts as state support has shrunk and in-state tuition for undergraduates has been frozen.

“We can’t just wait for the state to give us more funding; If we want to maintain our quality, we have to be entrepreneurial, generating much of our own revenue for investment,” Blank said.

“Let me be clear – with all of the revenue growth and innovations that have been implemented during my time here, we are still below our peers and haven’t caught up,” she said. “The right comparison is not with other UW System schools, but with our peer schools. In that comparison, we are still behind where we need to be, and have clearly lost competitive ground.”

For UW to maintain its position and quality, ongoing support for expansion of revenues and a commitment by the state and the System to continue funding UW–Madison at a level commensurate with its peers is necessary.

Blank said one way to support UW would be to approve borrowing authority for capital projects. No other flagship university in the country lacks program revenue bonding. She also urged more institutional autonomy over building projects.

“We must have greater control over these projects,” Blank said. “That’s management 101: Align incentives so the people who have to pay for and live in the building are responsible for getting things built and built well, on time, and within budget.”

She also urged System to reconsider “one-size-fits-all” policies. There are times when UW–Madison needs to be treated differently and given greater flexibility, Blank said.

“Understand that UW–Madison operates in a different environment than many of the other System schools.”

The nine-year freeze on in-state undergraduate tuition has placed UW–Madison, and other System schools, well behind the market, and will have a negative impact on quality the longer it continues.

“As long as some of our closest peer schools receive 50% more in tuition for every in-state student they admit, UW–Madison will struggle to compete with them and maintain the same level of quality,” she said.

Politicization is a threat

Blank also warned that the divisive political environment in the state, and politicization of higher education, poses a threat to UW–Madison. She urged the board to actively engage with political leadership on both sides of the aisle when they criticize the university.

“This is not unique to Wisconsin; it is happening across the country,” she said. “Where we once were a nation with high, bipartisan support for higher education and particularly public higher education, we are now a nation deeply divided along political lines on the value of universities.”

Thanks to the help of the Regents and other supporters, higher education has made strides in quality in recent years. That support will need to continue to ensure the continued growth of UW–Madison, Blank said.

“If we’re going to maintain our reputation and our quality, we need to continue to invest and grow in the right ways.  To do that, we need resources – and we will help generate those — combined with a smart strategy for the future. That will be the job of the new Chancellor.” 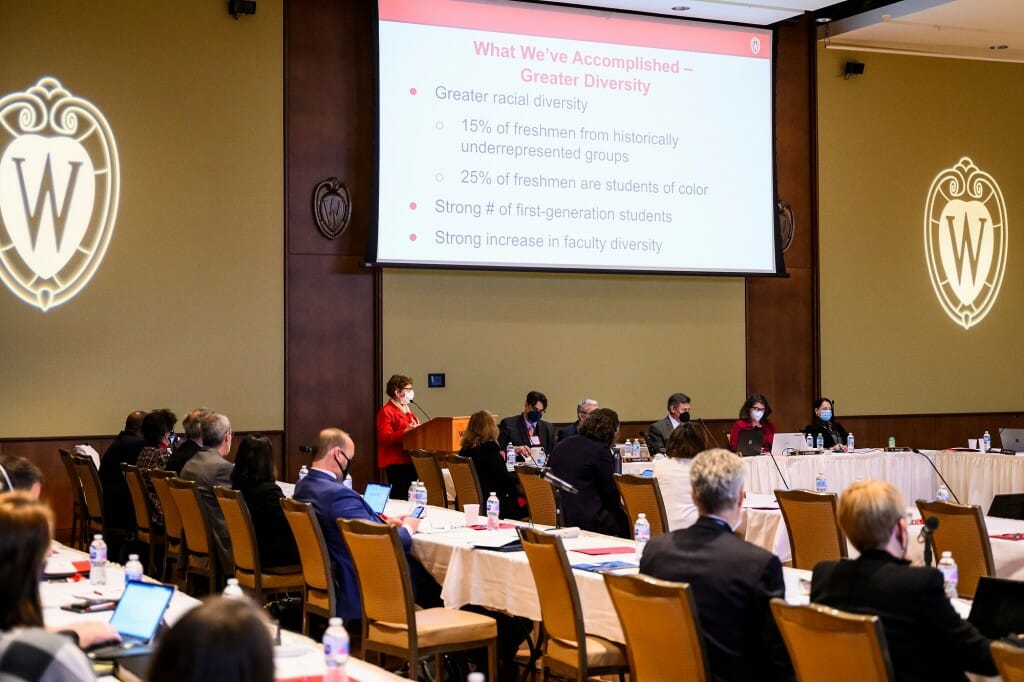 Tags: Board of Regents, chancellor