Chancellor Blank appointed to NCAA Board of Governors

Chancellor Rebecca M. Blank has been appointed to a four-year term on the NCAA Board of Governors, representing the Big Ten athletic conference.

The NCAA is governed by legislative bodies comprised of volunteers from its member schools, as well as committees that set policies for sports rules, championships, health and safety, and matters affecting women and students of color. The Board of Governors is the highest governance body in the NCAA, composed of chief executive officers from member schools. The board ensures that each division operates consistently with the association’s policies and guiding principles. 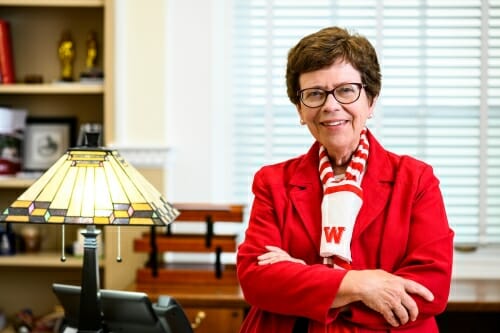 “This is a time of great complexity and challenge for colleges and universities,” Blank said. “I look forward to working with my colleagues to address the many important issues affecting our student athletes and our athletic programs.”

The Big Ten athletic conference is comprised of 14 universities — each ranked among the top 65 universities in the nation according to the 2017 Academic Ranking of World Universities. The conference’s athletes are exceptional both on the field and in the classroom – the Big Ten leads all conferences with more than 1,800 Academic All-Americans, including 37 honorees during the 2018-19 academic year. Big Ten schools annually conduct $10 billion in funded research, $5 billion more than any other conference.

Blank became chancellor of Wisconsin’s flagship university in July 2013, bringing with her a deep commitment to educational excellence and innovation. She is a respected economist who also has served in three presidential administrations, including service as deputy secretary and acting Secretary of Commerce.