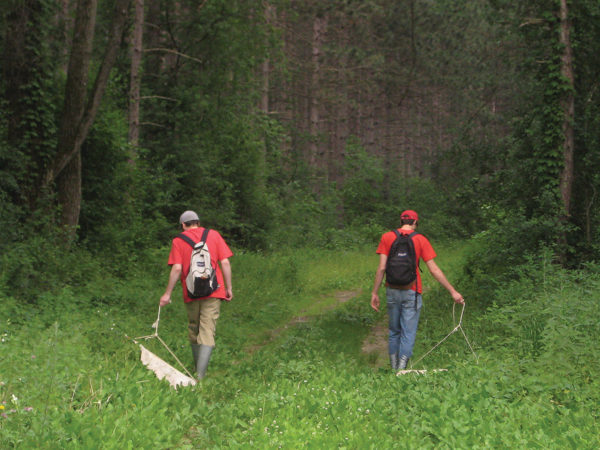 Postdoc Scott Larson and Colin Sinott BS’13 (an undergraduate at the time), “drag” for ticks in the Kettle Moraine State Forest – Southern Unit. The drags, large pieces of fabric with strips or tails cut into the end, help researchers collect ticks and bring them back to the lab for identification and pathogen analysis. Photo by Xia Lee

From February through June, we will be highlighting the ways that UW–Madison changes lives for the better throughout the state of Wisconsin. February’s theme is Improving Health. Watch for more at #UWChangesLives on social media. And here’s how you can help.

Home to robust populations of ticks and their hosts (namely, mice and deer), Wisconsin has become a hot spot for tick-borne diseases.

Over the past 25 years, deer ticks have trekked from the northern parts of the state to the south and east. They are now found nearly everywhere, lurking in the backcountry, in the wooded areas of neighborhoods, and even in well-manicured lawns. 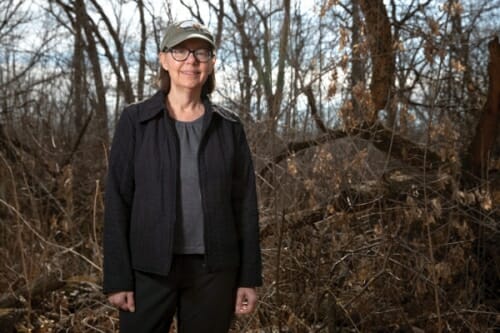 Susan Paskewitz, professor and chair in the Department of Entomology, is pictured here in the UW Arboretum, the site of ongoing research on control strategies for two common vectors — ticks and mosquitoes. Photo by Michael P. King

Wisconsin residents are also encountering more of another well-known pest — mosquitoes. In summer 2017, UW–Madison Professor Susan Paskewitz and her colleagues in entomology trapped 80,000 mosquitoes in Dane County. That’s eight times more than ever observed previously, a sign that their numbers are growing.

The Asian tiger mosquito, a species capable of spreading the Zika virus, was found in Wisconsin last year. 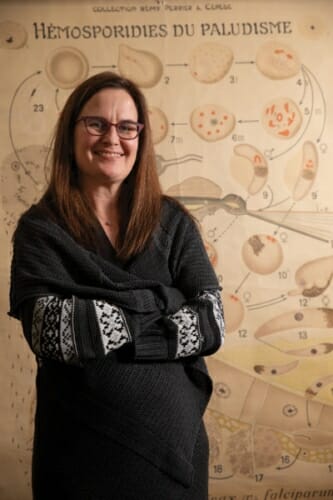 Lyric Bartholomay, professor of pathobiological sciences at the UW School of Veterinary Medicine, stands in her office near an old, elaborate diagram depicting how a mosquito transmits the parasites that cause malaria in humans. Photo by Michael P. King

As mosquitoes and ticks travel into new territory, exposure to the diseases they carry increases.

But the good news is, UW–Madison is leading a strong new effort to prevent these diseases from spreading.

The Midwest Center of Excellence for Vector-Borne Disease was established at UW–Madison in 2017 with a $10 million grant from the Centers for Disease Control and Prevention to research illnesses transmitted by ticks and mosquitoes (the vectors, in this case) and train new professionals who can stop the diseases from spreading.

Led by Paskewitz, chair of entomology, and Lyric Bartholomay, associate professor in the UW School of Veterinary Medicine, the center aims to help Wisconsin be better prepared to respond to ongoing cases and stop epidemics before they start.

“The goal is to provide public health and public health entomology expertise in these regional areas,” Bartholomay says. “This is really unprecedented investment in this kind of work.”

The investment will allow researchers and public health officials to keep a close watch on a number of pathogens transmitted by ticks and mosquitoes. Lyme disease is the most prevalent tick-borne disease in Wisconsin, with almost 1,500 confirmed cases in 2016 (and many cases go unreported).

One main objective of the new center is to spur collaboration among various sectors — academia, industry, and public health — to improve vector surveillance, outbreak responses, and prevention efforts.

The center’s many partners, including universities, public health departments, clinics, and mosquito control districts, can be found in Illinois, Iowa, Michigan, and Minnesota. The collaborators work together closely, communicating and consulting regularly.

“We’re hearing about things that are happening in neighboring states, so that puts us on alert,” Bartholomay says. “We can then have conversations about how we might respond much more quickly than if we had to wait for data to be reported at the end of the mosquito and tick seasons.”

To be certain that the right personnel will be available when the next disease or outbreak arises, the Midwest center trains new experts in public health entomology, an essential part of their focus on readiness.

“We’re training people who could mobilize in a very short time in the event of an emergency,” says Paskewitz. “And the Public Health Entomology Certificate that we offer is a major piece of that effort.”

In addition, the Midwest center is educating new researchers to augment the information and ammunition available for combating vector-borne diseases. Undergraduates, graduate students, and postdocs participate in many different research projects as they work to identify, understand, and fight diseases and vectors.

As researchers get an idea of where the ticks live and what pathogens they harbor, they can come up with ways to reduce tick exposure and disease prevalence. Scott Larson, a postdoc with a master’s degree in geography, hopes to develop new maps that show how the risks of diseases differ across Wisconsin.

Larson and other researchers in the lab are also looking for ways to help homeowners take tick control into their own hands — and their own backyards. Studies conducted in the UW Arboretum show that tick numbers could be reduced through the use of “tick tubes,” short stretches of pipe stuffed with cotton balls coated with an insecticide called permethrin. The tubes are placed near fallen trees or logs that serve as small animal highways. When animals happen upon the tubes, they nab the cotton balls for their nests, and the permethrin transfers to their coats, where it repels and kills ticks.

Tick tubes and other control strategies will become tools for public engagement as experts work to inform and involve more people in the center’s work. Larson has held training sessions and meetings with public health departments and homeowners’ associations in various parts of the state. He builds relationships with communities and finds opportunities to include them in the research process.

A new app, launched in May, will amplify the public’s role in gathering data and developing prevention methods. Bieneke Bron, a postdoc with the center, developed The Tick App in collaboration with the Northeast Center of Excellence and the UW–Madison Center for Health Enhancement Systems Studies. It asks users questions about their possible exposure to ticks.

Bron wants to use this data to determine where people are encountering ticks, which tick species they are running into, and how often tick bites result in disease transmission.

In addition to data collection, Bron and her colleagues want the app to become a prevention tool. It can educate users about safe practices during tick season, remind them to use their bug spray, and send out alerts when tick numbers are peaking. And the ability to identify ticks through the app could lead to a better understanding of which ticks are harmless and which are cause for a precautionary trip to the doctor’s office.

Other public outreach methods in the works include new flyers and a center website that will host up-to-date information about vectors and disease prevention.

To read more about the center, go here.