New research at Meteor Crater shows extreme temperatures and pressures during the impact that created the crater 49,000 years ago. Aaron Cavosie

In molten sandstone extracted by prospectors a century ago, an international team of scientists has discovered microscopic crystals telling of unimaginable pressures and temperatures when an asteroid formed Meteor Crater in northern Arizona some 49,000 years ago.

The crystals, called zircons, have endured temperatures of 2,000 degrees Celsius or more, hot enough to melt any rock on Earth. In our planet’s crust, such temperatures occur only briefly inside impact zones, says Aaron Cavosie, a visiting professor in the Wisconsin Astrobiology Research Consortium at the University of Wisconsin–Madison.

Zircons are tiny, phenomenally stable crystals that can persist for billions of years and have been used to date ancient asteroid impacts. But the new study, now online in the journal Geology, sheds light on a more recent impact at Meteor Crater, which may be the best studied impact zone on Earth. “It’s fresh, young and easy to get to,” says Cavosie, who is also a senior research fellow at the Western Australian School of Mines, Curtin University, in Perth, Australia. 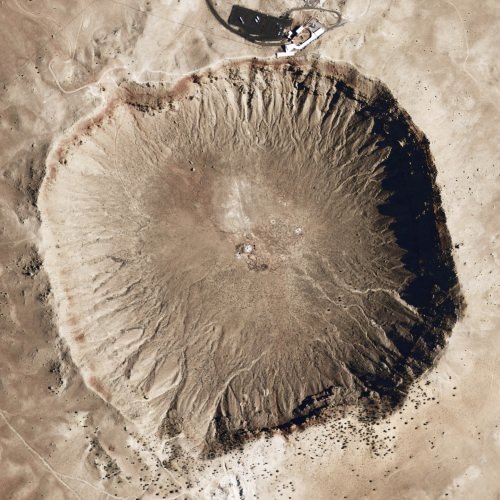 Satellite image of Meteor Crater in Arizona, caused by an impact about 49,000 years ago. NASA Earth Observatory

In an electron microscope, the zircons look like agglomerations of BBs. Such “granular” zircons are also found in a giant impact crater in South Africa and on the moon, “but until now no one has cracked the code to figure out what turned normal zircons into thousands of grains glued together,” Cavosie says.

Cavosie’s group, including Nick Timms and Curtin Ph.D. candidate Timmons Erickson, along with collaborators Justin Hagerty from the U.S. Geological Survey and Fred Hörz from NASA, strung together several lines of evidence to conclude that the zircons had been subjected to a pressure of at least 300,000 atmospheres, and temperatures above 2,000 degrees C.

“The new diagnostic techniques reported by Cavosie and colleagues will aid in cataloging impact events on Earth and elsewhere in the solar system.”

When the researchers fired a beam of electrons at 14 zircons, the electrons scattered back to a detector revealed the chemistry and the complex structure of the zircons. “When we looked at the texture of these unusual zircons, we saw that the orientations of the BBs are non-random, and instead are highly systematic,” Cavosie says.

These zircons are so tiny that eight, lined up, would extend across the width of a hair.

The orientations “record a series of changes that happen as zircons get shocked at increasing pressures – think Dante’s levels of hell for zircons,” Cavosie says. A moderate level of shock creates planar cleavages, “but as you go to higher levels, the zircon makes a twin, which is what happens when parts of a crystal are forced into a different orientation. This specific change is only caused by impact, and we have seen it in other places.”

Another distinctive orientation “only forms when zircon changes to the extremely rare mineral reidite,” Cavosie says. “This transformation is proven in the lab to require even more extreme pressures than twins.”

Finally, the impact (from an asteroid with an estimated diameter of 50 to 100 meters) created such an extraordinarily high temperature that it vaporized or melted all rocks in the surrounding crust. The quartz grains in the sandstone fused into the glassy, “shock-melted silica” that encased the zircons. 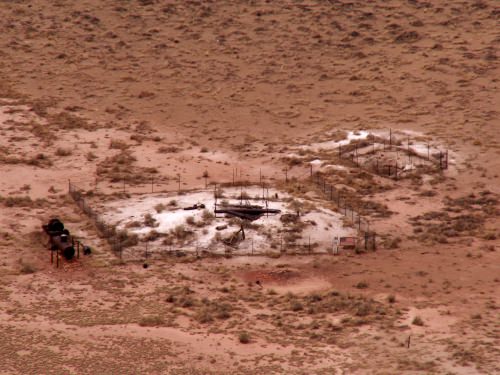 Crystals extracted from a rubble pile collected a century ago by prospectors at Meteor Crater showed extreme temperatures and pressures during the impact that created the crater 49,000 years ago. Aaron Cavosie

“When we screwed all these parts together,” Cavosie says, “the orientation of the granular zircons, the pressure required to form the twin phase and then reidite, and the finding that zircons were briefly swimming in a pool of liquid silica at about 2,000 degrees, hot enough for the zircons to recrystallize into this beebee-like granular texture, and then the evidence that this cooled very quickly, we saw that the granular zircons left a trail of breadcrumbs that allowed us to reconstruct how they were made, and in what conditions.”

Extreme pressures and temperatures that quickly subside comprise an unusual realm for geology. “Geologists are used to thinking about slow processes,” Cavosie says. “The process that transforms carbon into diamond is slow and steady; it involves high pressure and temperature but happens over millions of years.”

The equally dramatic transformation that creates a granular zircon occurs over a few minutes at most. “Then, the extreme pressure is gone, the high temperature has cooled off,” Cavosie says. “The impact leaves a giant hole in the ground, but it takes a mental adventure to wrap your head around the fact that the transformation in these zircons happened in seconds to minutes.”

The significance of understanding the formation of granular zircons extends far beyond one large meteor crater, Cavosie says. “These granular zircons have been found in meteorites, whose history we know very little about. Now, when we find them in a meteorite, it will allow us to recreate the conditions that the meteorite experienced on its path to Earth.”

The same is true for rocks returned from Mars and the moon, Cavosie says, and indeed he’s already investigating some moon rocks returned by the Apollo program.

“The new diagnostic techniques reported by Cavosie and colleagues will aid in cataloging impact events on Earth and elsewhere in the solar system,” says zircon expert John Valley, a professor of geoscience at UW–Madison.  “This is important for understanding the history of Earth and the emergence of life. It will also aid in predicting the frequency of future large impacts to Earth, equivalent to the one that killed off the dinosaurs 65 million years ago, nearly extinguishing all life on land.”