The Capital Times’ charitable arm, The Evjue Foundation, is awarding $322,500 in grants to 30 different programs at the University of Wisconsin–Madison.

In addition to the 30 grants for UW, the foundation’s directors also approved $1,166,500 in grants to 82 community projects. In total, The Evjue Foundation is awarding nearly $1.5 million to better the community.

The donations include a $30,000 grant for the university’s acclaimed Odyssey Project that gives low-income adults a chance to attend college and $40,000 to support the Wisconsin Historical Society. 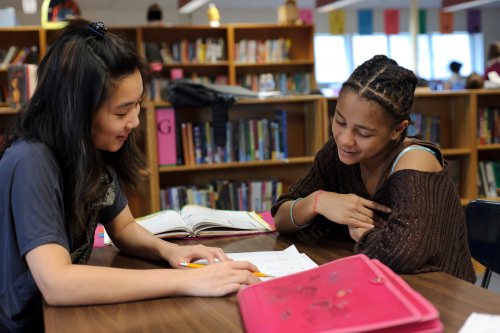 A $15,000 grant will be awarded to the Morgridge Center for Public Service to support the Badger Volunteers program. Photo: Jeff Miller

As has been its tradition, the foundation distributed its available funds to numerous area organizations that focus on children’s education, the arts and other social services.

The foundation’s finances are derived from the controlling stock in The Capital Times Co. held by the late William T. Evjue — the founder and longtime editor and publisher of the newspaper — and the foundation’s investments. The community and the university have received gifts and grants totaling more than $57 million since Mr. Evjue’s death in 1970.

Mr. Evjue established the foundation before his death, but it was the provision in his will to distribute the income from his controlling stock in the newspaper back to the community that accelerated the giving. The grants represent a significant portion of the profits of The Capital Times Co., which is locally owned.

The William T. Evjue Charitable Trust, which holds Mr. Evjue’s controlling stock in the newspaper company, distributes the income from that stock and other investments to the foundation, which in turn makes decisions about where the money will be spent.

Here’s a list of the grants awarded to UW–Madison:

Center for Journalism Ethics: $10,000 in support of the center’s annual ethics conference and to underwrite the William T. Evjue keynote address.

Wisconsin Idea Seminar: $11,000 for the annual trip around the state, which introduces new faculty to Wisconsin and the spirit of the Wisconsin Idea.

Madison Journal of Literary Criticism: $1,500 to help support the only international journal dedicated to the publication of literary criticism.

Lily’s Fund for Epilepsy Research: $10,000 in support of finding a cure for epilepsy.

Dance Department’s Performing Ourselves: $10,000 in support of the outreach program to teach dance to underserved youth in the Madison area.

UW Odyssey Project: $30,000 in support of the 15-year-old program, which offers adults near the federal poverty level a chance to start college for free.

Morgridge Center for Public Service: $15,000 in support of the center’s Badger Volunteers program, which provides transportation for student community volunteers.

UW-Madison Libraries: $7,000 to help underwrite the Wisconsin Women Making History project, which tells the stories of women who have taken leadership roles.

UW-Madison Libraries: $20,000 to enhance the digitization of The Daily Cardinal student newspaper.

Center for History of Print and Digital Culture: $4,000 to support the center’s annual conference and help lower the registration fees.

Waisman Center: $10,000 to help attack the waiting time for autism evaluations at the acclaimed center.

Biocore Outreach Ambassadors: $4,000 in support of student volunteers who conduct science outreach in all corners of the state as part of its Wisconsin Idea mission.

Center for the Humanities: $25,000 to help underwrite the center’s efforts to connect scholars in language and literatures with high school teachers and students across Wisconsin.

School of Human Ecology: $9,000 in support of the school’s program to connect Wisconsin residents with health care coverage, particularly important given the changes Congress is considering for health care this year.

University of Wisconsin Press: $18,000 to support Evjue internships that allow students to get training and experience in publishing.

School of Library and Information Services: $9,000 toward a program aimed at reaching campus and community members to explore printing technologies.

UW Law School: $10,000 in support of the school’s Innocence Project, which attempts to exonerate innocent people who have been imprisoned.

School of Nursing: $5,000 toward a program aimed at increasing diversity in the nursing profession.

School of Human Ecology: $2,000 toward the school’s center for community and nonprofit studies.

Office of the Provost: $9,000 toward the Chancellor’s and Powers-Knapp Scholarship programs for historically under-represented minority groups.

Office of the Provost: $12,500 to match a grant aimed at enhancing the Chancellor’s Scholarship, which supports approximately 265 scholars each year.

Here are some of the community grants that are closely connected with UW:

Aldo Leopold Nature Center: $5,000 in general support of the center’s work connecting young people with the marvels of nature.

Friends of Allen Centennial Garden: $1,000 to help cover expenses at the celebrated garden on the UW campus.