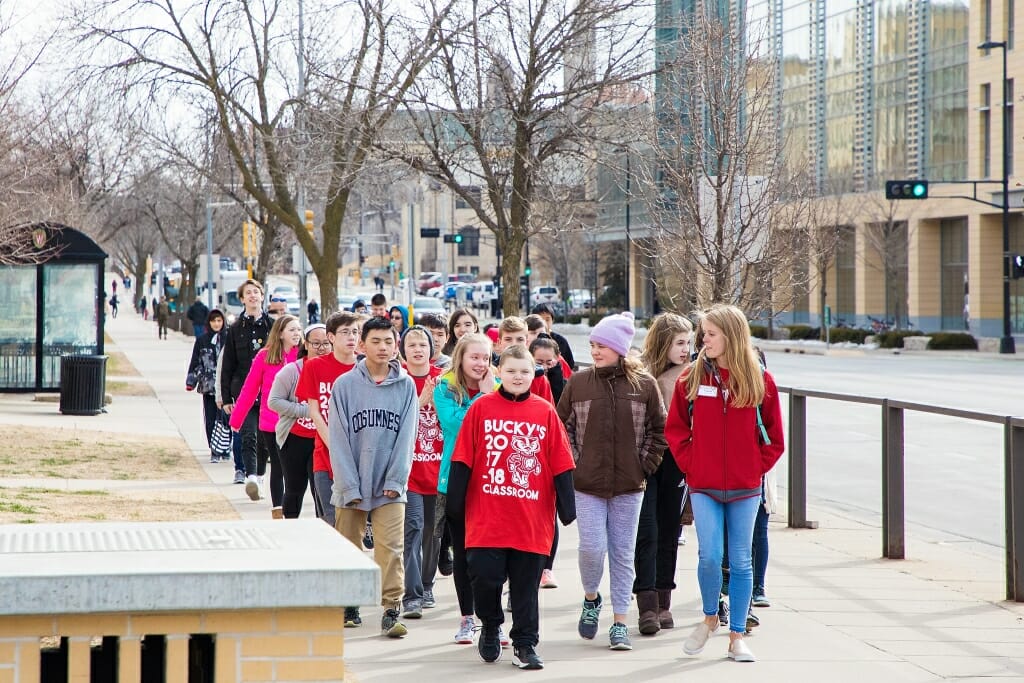 Students in Bucky's Classroom learn about all aspects of college life, including touring the UW–Madison campus. Photo by: Hyunsoo Léo Kim 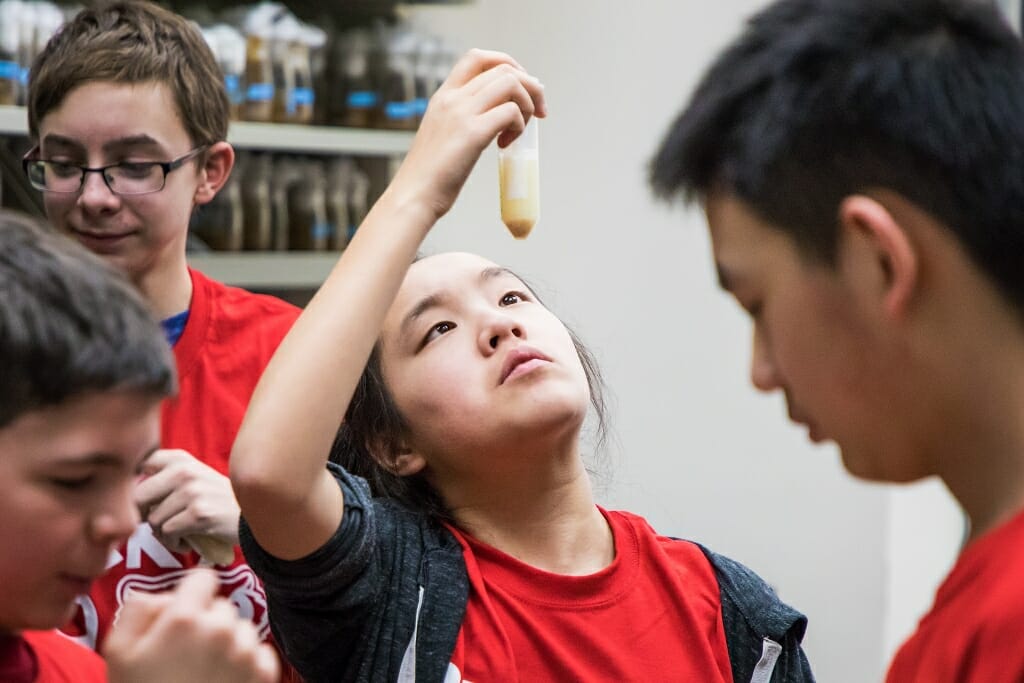 Christine Chang checks the mixture of wheat grain and water during a DNA extraction exercise as part of Bucky's Classroom. Photo by: Hyunsoo Léo Kim 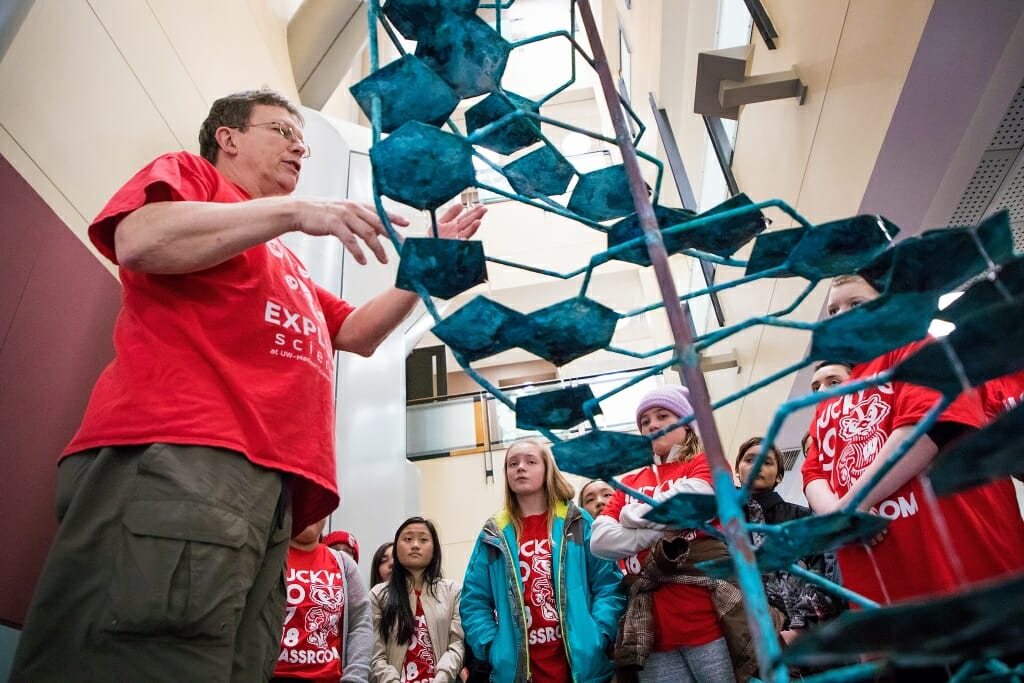 Instructor Thomas Zinnen explains the structure of DNA in front of a fountain at the Biotechnology Center, during Bucky's Classroom activities. Photo by: Hyunsoo Léo Kim 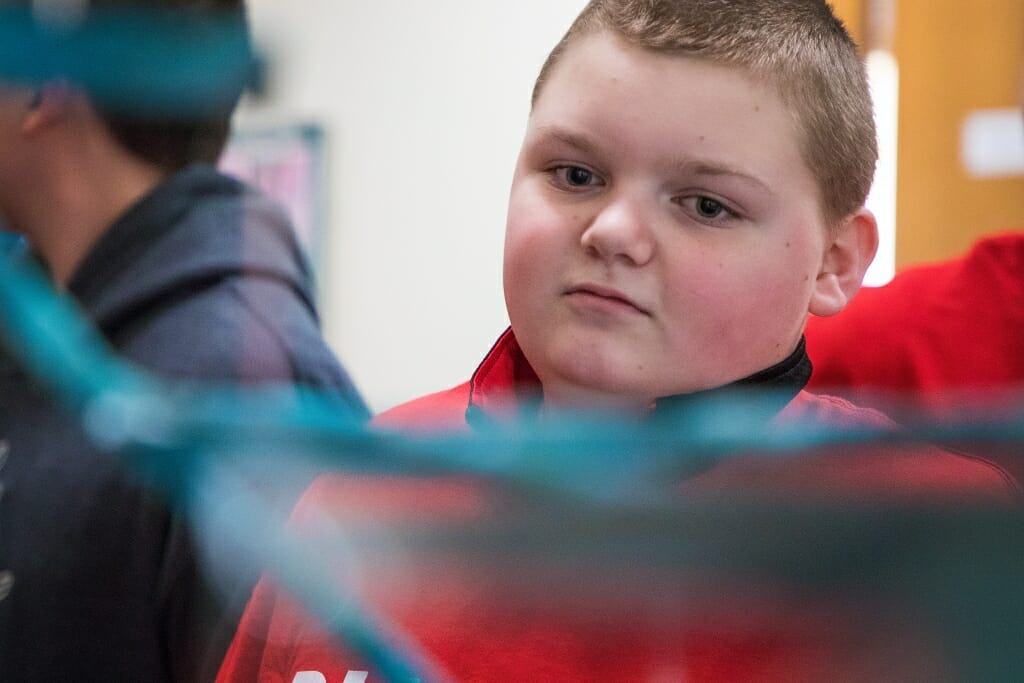 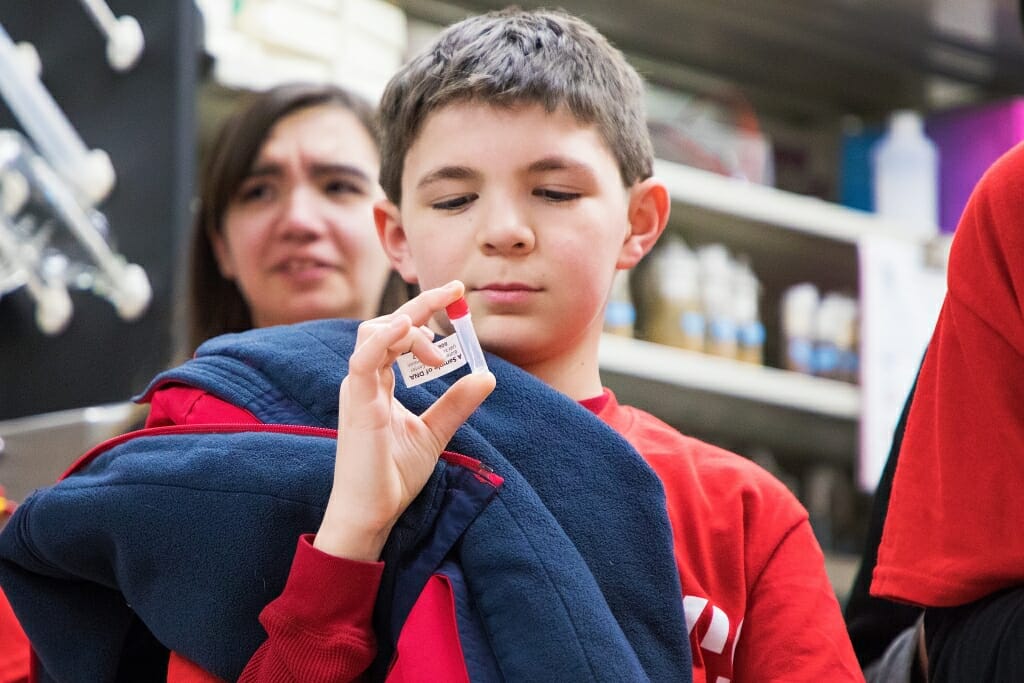 Conical tubes were rocked to sleep.

Yes, it was a day full of learning for about 30 students from D.C. Everest Junior High School near Wausau who visited campus Tuesday as part of Bucky’s Classroom. 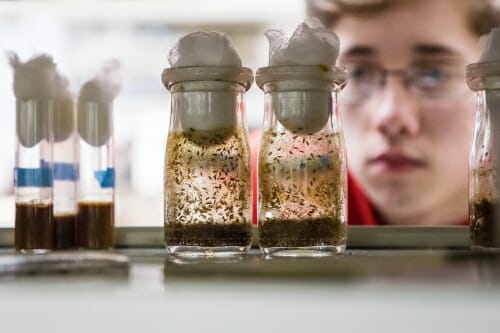 Bucky’s Classroom is a University of Wisconsin–Madison outreach program, committed to promoting the value of higher education among K-8 students across the state of Wisconsin and beyond. The goal is to provide classrooms with direct access to UW–Madison, increase college awareness and help young people explore career options. Students from throughout the state visited campus this week as part of the program.

The morning included a visit to the Biotechnology Center where students got to see a DNA fountain.

“DNA is a lot like the alphabet,” said Tom Zinnen, an outreach specialist for the Biotechnology Center.

That might not make sense at first but it was easier to understand when Zinnen asked how many letters J.K. Rowling uses for her Harry Potter books. Twenty-six, of course. The same number of letters we all have access to – and yet, Rowling has used those 26 letters to create an entirely unique world, much like DNA which uses four letters.

“Let’s make like Aerosmith and walk this way,” Zinnen said as he led the laughing students whose parents obviously educated them well in classic rock.

They got to visit a functional genetics classroom and see the equipment that college students use on a regular basis. Better yet, they got to conduct their own experiments.

“Hands-on is a must. A lot of it is having them do it and explore,” said Liz Jesse, an outreach specialist who helped lead the tour.

Jesse, a UW grad, taught chemistry for 10 years. She’s learned that you have to make learning relevant to kids. That might mean when you talk about genetic mutations kids will think of the X-Men, naturally. If that helps make a connection, great. Because then she can talk about mutations to food and how mutations can be useful.

That means no sitting down. No working with boring old paper projects. 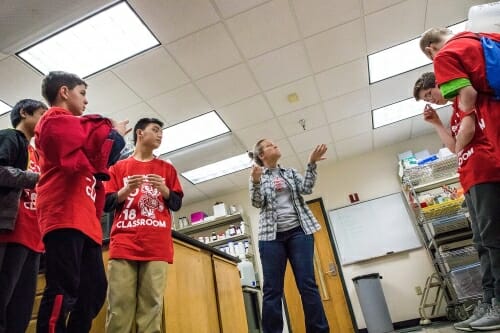 “It’s awesome,” said 12-year-old Kengy Vang as he conducted a DNA experiment. “The kind of projects you can do are really interesting.”

It was a good opportunity for the students to build upon what they had just learned in their genetics unit, said D.J. Huddleston, a D.C. Everest seventh grade science teacher.

“I’m just happy to get students experience on campus,” Huddleston said. “Many of them would be first-generation college students.”

Logan Rude, a UW–Madison junior majoring in strategic communication and communication arts from Janesville, is one of the Bucky’s Classroom student ambassadors who was partnered with the D.C. Everest School and visited the students numerous times.

“It’s been a blast,” Rude said. “They’re super engaged and curious about college in general.”

How big are the classes? What can you study? What groups are there to join? What are the dorms like?

They might not know what the Wisconsin Idea is, or what a land grant university is when they get here, but by the time they leave, hopefully they do.

Maybe some of the students will become Badgers. Maybe not.

But the idea is to give them a glimpse into a future that could include college.

“The big thing is to try to find new ways for kids to know college is accessible to them,” Rude said.

The program, administered by Campus and Visitor Relations, provides teachers, students and educational leaders with UW–Madison classroom resources, as well as an opportunity to directly engage with university students. By bringing UW–Madison into the classroom, K-8 students will begin to build a better understanding of college, learn about UW–Madison and discover the importance of establishing a strong foundation for their future, rooted in education. This past year, more than 750 schools throughout the country received UW–Madison classroom materials and resources, impacting more than 50,000 students.