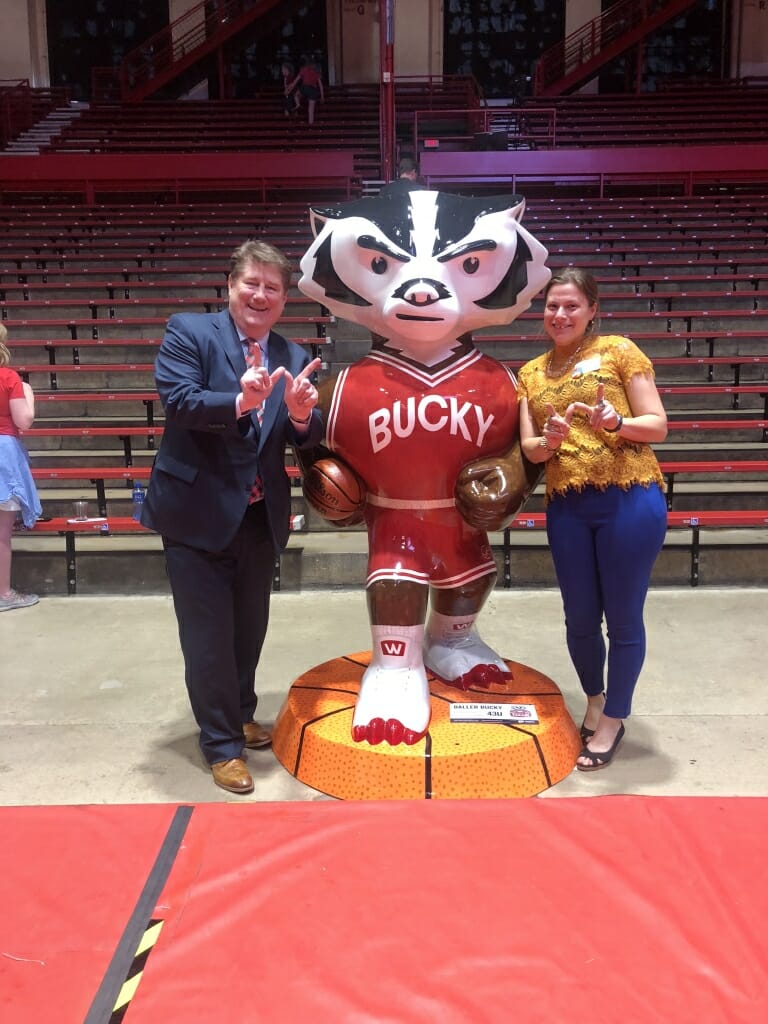 Artist Brooke Wentland and John Sheehan, who sponsored the Bucky, stand next to Baller Bucky at an unveiling event at the Field House. Baller Bucky is one of 85 unique statues made for Bucky on Parade, a public art project.

This summer we will feature a weekly Q&A with an artist who created one of the Bucky on Parade statues on UW’s campus to understand their artistic process, their inspirations, and why they love Bucky.

What is your history as an artist? Art, since a young age, has always been a part of my life. Once it came time for me to choose a profession, there was no doubt I wanted a career focused in art. I went to University of Wisconsin–Madison and earned my Bachelor of Fine Arts with a concentration in graphic design. Currently I am an art director at a local advertising agency/marketing firm.

I love photography and painting, including watercolors, murals, and decorative furniture painting. Bucky on Parade is the fourth public art event like this that I have participated in. Prior public events include “Cat’n Around Downtown” and “Bears, Bears, and More Bears” in Racine, and “Art Zoobilee” at Madison’s Henry Vilas Zoo – in which I painted an eight-foot tall giraffe.

What inspired you to come up with this take on Bucky? The theme for Baller Bucky was chosen by his sponsor, John Sheehan, an ’83 alum of UW–Madison and President of UW Health’s The American Center. John is a big Badger sports fan and during our first conversation it became clear he already had Bucky’s vision – and future – planned out. John informed me that after the Bucky on Parade event, Bucky will move to The American Center where he will call the sports therapy area his new home. Here, Bucky will be among friends. Already in that space is a large painted cow sculpture wearing a Badger football uniform from Madison’s 2006 “Cows on Parade” event. 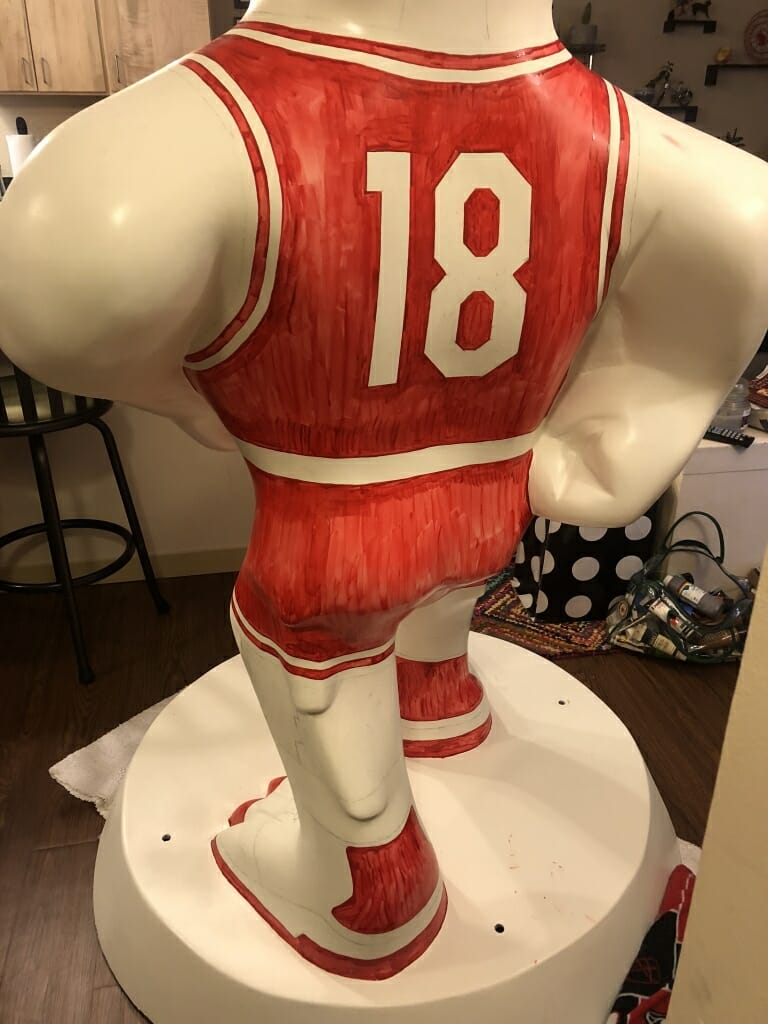 Baller Bucky gets its first coat of paint.

What idea or message do you hope people get out of this piece of art? I look at the Bucky on Parade sculptures as a medium to celebrate all that we think of and love about Madison. I don’t think that art always needs to be about social change or have a deep meaning. Instead, sometimes art can just be fun – art for the sake of art. Baller Bucky honors UW’s beloved sports culture. While a student at UW, I had season tickets to football, basketball, and hockey and I admit basketball was my favorite. I had a great time working on Baller Bucky and while doing so, I reminisced about some of my favorite memories while attending UW. I hope those seeing Baller Bucky on campus will be able to smile and appreciate all the great things, big or small, academic or athletic, that make up our university. 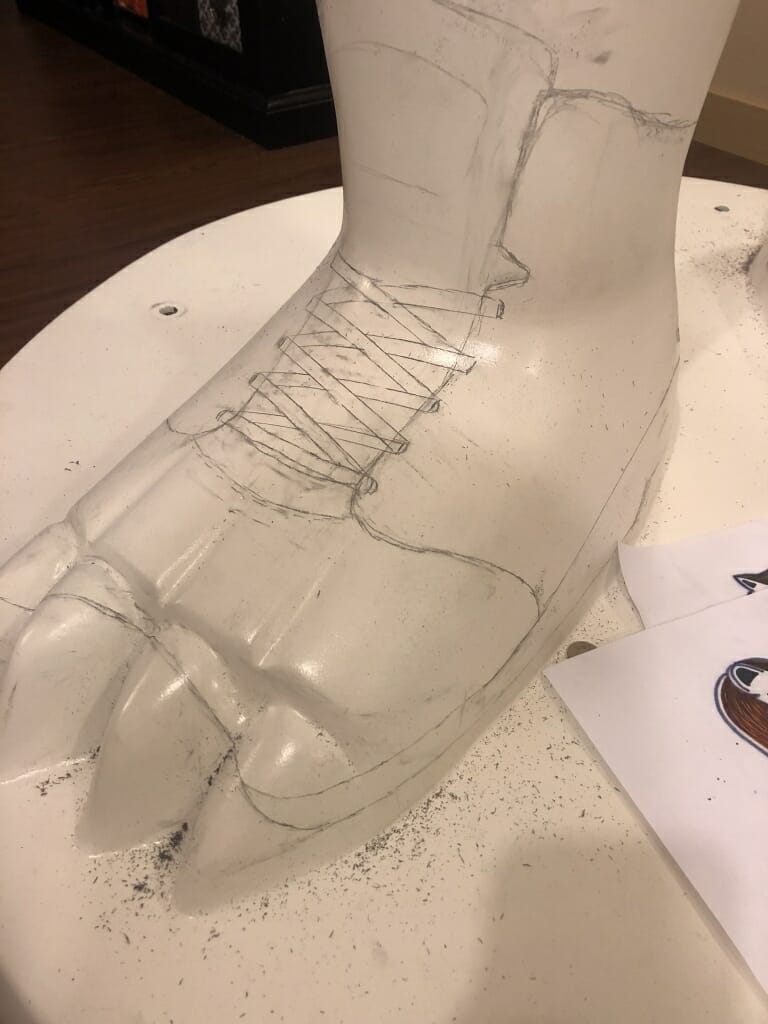 The sketched outline of Baller Bucky’s paw, which Wentland said was the hardest part of the design to complete.

What was the process of creating your Bucky like? As I’m sure any Bucky on Parade artist would tell you, Bucky is a very large canvas! Although I never kept track of exact number of hours I invested in bringing Baller Bucky to life, I would estimate that it likely took me 60 hours to complete. Painting Bucky’s shoes proved to be challenging as I drew and redrew the shoes in pencil first to get them to look just right. The lettering on the jersey was all hand drawn, and often I used things sitting around my home to make small measurements (for example, the width of the letters that spell out “Bucky” on his check are the width of a quarter.) My biggest challenge was creating the basketball that is under Bucky’s arm. The basketball is a foam sphere covered with real basketball skins. I cut apart three real basketballs to put them back together to create it. During the first week the sculptures were on display, the basketball unfortunately was damaged. Thankfully I was able to retrieve it and reattach it, but knowing how much time I put into that basketball, I hope it will stay put for the remainder of the Bucky On Parade event!

Of the other Bucky Badgers created, which ones do you like best? A Taste of Madison: Great line drawing. From a distance it looks quite minimal but up close the detail and well executed drawings are quite impressive.
Bucky in Red: All the hand drawn details. Beautiful!
Sconnie B. Goode: The found objects on this sculpture give it so much dimension. Quite impressive!
Vial Caps for a Cure: I loved learning about this Bucky, the details that went into it, and what these “plastic things” were. What a great effect, message, and effort.
Visible Bucky: The subject matter isn’t quite my cup of tea but it is so well done. Amazing!
Wisconsin Colors: I love the style of painting this is done on this one. And the Wisconsin state shape on the cow’s forehead is ingenious!
It Takes Two Wheels: Ok, full disclosure, this is the other Bucky sculpture I painted. I can put in a shameless plug, right? 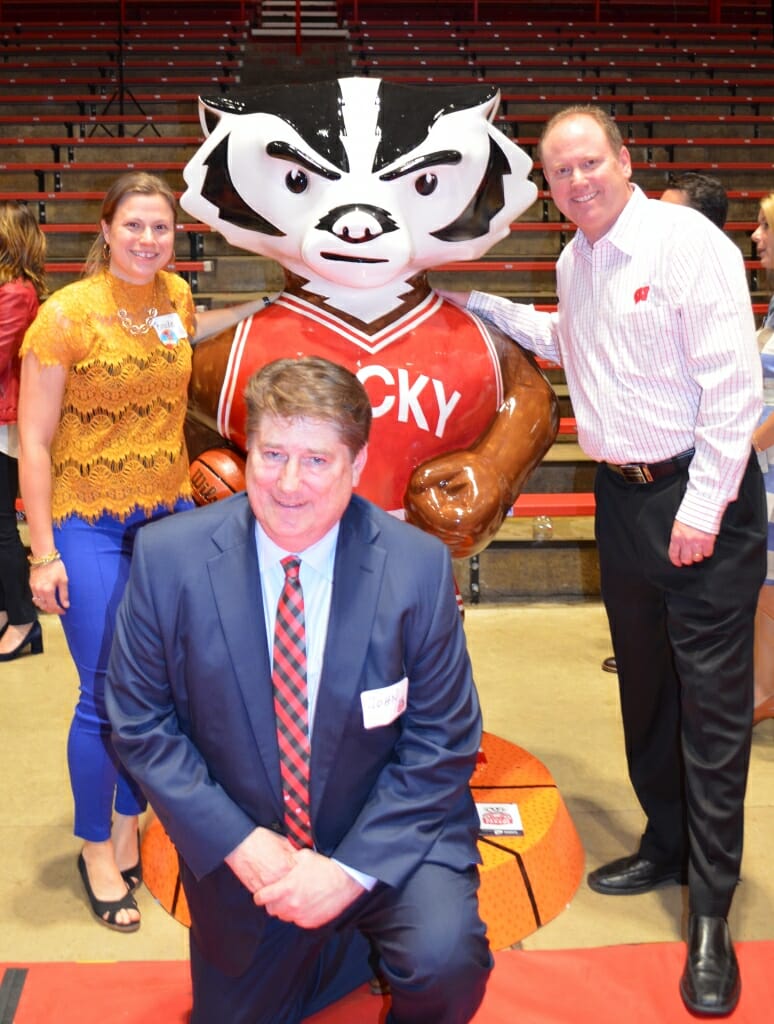 Wentland, Sheehan and Coach Greg Gard, whose charity Garding Against Cancer will receive proceeds from the sales of Bucky on Parade statues, stand next to Baller Bucky at an unveiling event at the Field House.