The idea struck Max Bobholz as he watched the 2012 Little League World Series on his television in Green Bay.

A profile of the Ugandan team described how the players sometimes lacked shoes and often shared bats and baseballs. Bobholz, a sixth-grader at the time, realized he had a bunch of old baseball equipment in his garage he wasn’t using. He figured his friends did, too. 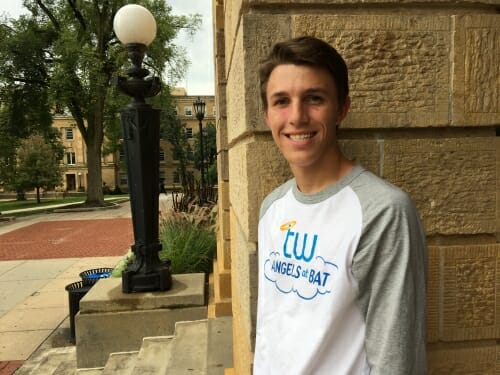 He told his parents he wanted to start an organization that would collect used baseball equipment and distribute it to young players in African countries.

‘Sure,’” says Bobholz, now a freshman at UW–Madison.

But he persisted, even telling them that the only Christmas present he wanted that year was help in turning the idea into reality.

Today, the charity he founded, Angels at Bat, has collected more than 10,000 baseball-related items and delivered about 8,000 of them to African countries, mostly Kenya and Nigeria. Another 2,000 items will be shipped this fall.

There are now five Angels at Bat chapters: Green Bay; Denver; St. Louis; Eagle River, Alaska; and Cambridge, Minnesota. Bobholz has made four trips to Kenya to deliver items, most recently this past summer. The trips double as opportunities for Bobholz and others to teach baseball to children who’ve never played it.

College won’t change that, he says. He’s setting up the charity to last “beyond college and beyond my lifetime.”

It’s an all-volunteer effort that began by word of mouth but quickly gained traction with media attention. His family first stored donated items in their garage, then rented a storage unit when the volume pushed out their vehicles.

On his first trip to Kenya in 2016, Bobholz and his mom took 19 suitcases of donated items.

“As I interacted with kids there, I realized we shared many of the same stresses and issues,” he says. “It made the world a lot smaller.”

The charity has helped Bobholz deal with tragedy. Just a few months before the 2012 Little League World Series, Todd Williquette, Bobholz’s coach and a much-beloved figure in the Green Bay baseball community, took his own life. To honor Williquette, the charity’s logo incorporates his initials, and every baseball and bat donated to African countries has the number 20 – his jersey number –handwritten on it.

“I think he would be very happy to know that something so dear to him is now giving so much joy to others,” Bobholz says.

Bobholz played baseball throughout high school but is taking a break to focus on his studies. He’s double-majoring in neuroscience and African cultural studies and taking Swahili to aid his charity work. He hopes to start a campus chapter of Angels at Bat, perhaps as a sophomore.

For more information on Angels at Bat, including how to donate items, go to angelsatbat.yolasite.com.

Why I chose UW–Madison: Growing up in Green Bay, I’ve always been proud of my Wisconsin heritage. UW–Madison is the best school in the state, so I wanted it to be my next step.

What I’m most looking forward to this year: I’m here to get an education, so I’m excited to learn a lot.

Something on my Bucky List: I don’t know if this is a big tradition, but I’m looking forward to biking around Lake Monona.