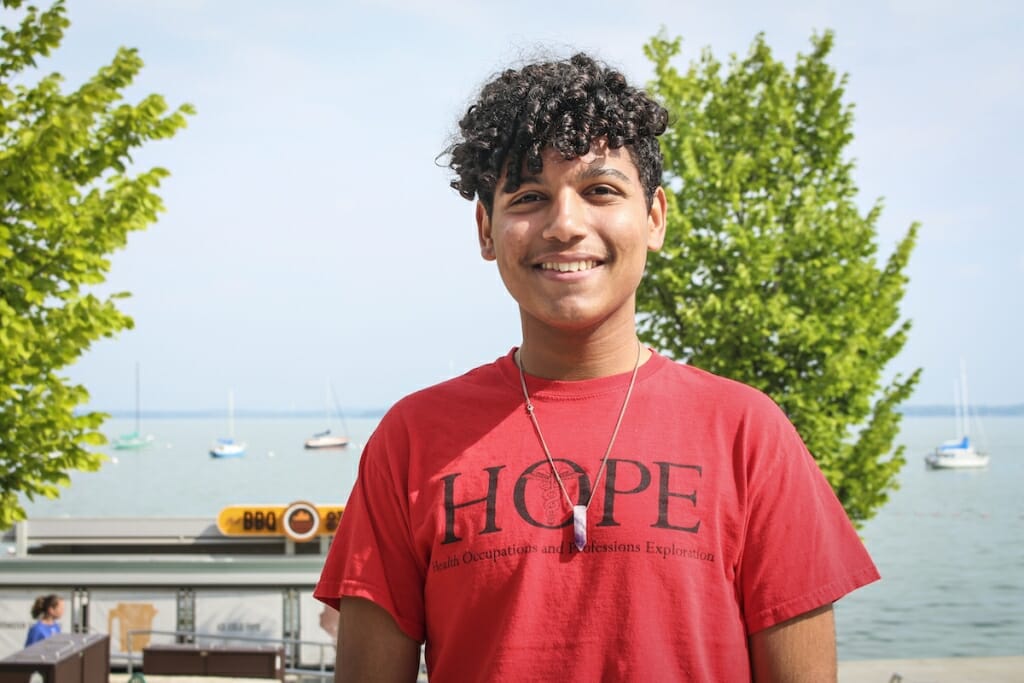 “It would not be fair to come from so far away only to give up or to not give it my best, especially when so many others want the opportunities that I’ve been given,” says Yanci Almonte Vargas, a UW–Madison freshman who emigrated from the Dominican Republic as a middle school student. Photo by Pa Da Lor

At age 12, Yanci Almonte Vargas learned he’d be leaving the Dominican Republic for a new life in the United States.

He was thrilled. All his favorite Disney Channel sitcoms originated from New York City.

“I thought, I’ll go there and live this fun life like the TV shows portray,” he says.

The reality has been a bit more mixed — lots of positive experiences, for sure, but also some challenges. Now, as a freshman at UW–Madison, he’s able to look back on those years with an eye toward helping other young immigrants prepare for what awaits them.

He offers his views and some advice in an essay in “Green Card Youth Voices: Immigration Stories from Madison and Milwaukee High Schools.” The book, published this month, features 30 stories by youth from 15 countries. Vargas lives in Madison and graduated from Madison Memorial High School.

The book is the fifth in a series highlighting youth by Green Card Voices, a Minneapolis nonprofit organization that works to share immigration stories of foreign-born Americans. The other books feature youth from Minneapolis, St. Paul, Atlanta and Fargo.

Vargas, 18, learned of the series at Madison Memorial, where students discussed one of the prior books in the series as part of an all-school read. He was instantly captivated by the first-person narratives.

“It was a whole new thing to me,” he says. “Usually immigrant stories are filtered through someone else’s views or perspective.”

Vargas jumped at the chance to be part of the next book in the series.

His essay recounts his upbringing in the Dominican Republic, where he was raised by his single mother, a veterinarian. After Vargas completed sixth grade, his father, who already had immigrated to the United States, arranged for him to join him in Pennsylvania. Vargas says his mother agreed to this because she wanted her son to have more educational and career opportunities than the Dominican Republic could provide.

Many aspects of the transition were difficult, including school, where Vargas says he felt socially isolated and struggled to do his coursework in English, his second language. After some traveling back and forth to the Dominican Republic, he came to Madison three years ago to live with a close family friend and to try high school at Madison Memorial.

“It would not be fair to come from so far away only to give up or to not give it my best, especially when so many others want the opportunities that I’ve been given.”Yanci Almonte Vargas

“Basically, from then on, it’s been great,” he says. “I’m more open, I’m more extroverted. I’ve gotten out of my bubble. I’m not so shy.”

He credits Madison Memorial for much of this.

“They completely changed my life,” he says. “They challenged me to try new things, both academically and socially.”

Vargas threw himself at school and extracurricular activities. He participated in the school’s college readiness program, its Scholars of Color organization, and its theater program. Through the local United Way, he trained as a youth leader, becoming involved in causes such as LGBT rights and climate change. Some nights, he says he slept only a few hours.

“It would not be fair to come from so far away only to give up or to not give it my best, especially when so many others want the opportunities that I’ve been given,” he says.

Vargas applied to seven colleges and was accepted to all of them, he says. He plans to pursue a career in health care.

Leslie Mitchell, an English teacher at Memorial High School who has known Vargas since his sophomore year, says she immediately thought of him when Green Card Youth Voices approached the school about participating in the next book in the series.

“He’s a student who always wants to do better, not just for himself, but for the world around him,” she says. “His story is one I hope other immigrants will relate to and see as inspirational.”

A legal resident of the U.S., Vargas says he follows the roiling debate over immigration — but only up to a point.

“It’s very stressful to listen to,” he says. “I’m trying to have a positive impact in everything I do. If I focus on the negative, it could cloud my vision.”

In his essay, he encourages young immigrants to not let others put them down.

“I know it’s really hard right now,” he writes, “but keep going. Never let the darkness turn off your light. And your accent — don’t change it, keep it, be you, and just shine your light.”