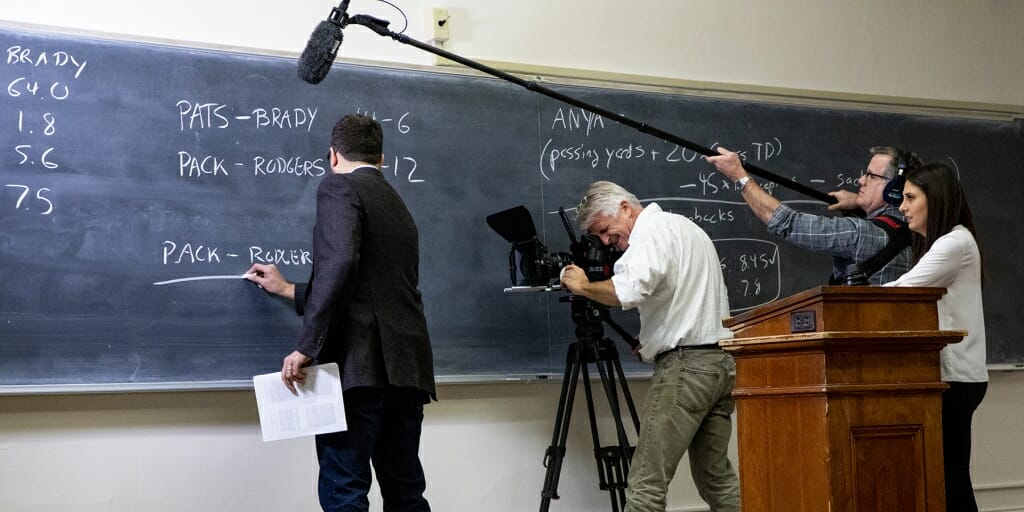 Sometimes math professors find themselves in surprising places. Look for UW–Madison’s Jordan Ellenberg in the national broadcast of the Nov. 4 match-up between the Green Bay Packers and the New England Patriots on Sunday Night Football.

NBC Sports filmed Ellenberg as part of a special pre-game feature out to shed mathematical light on one of life’s great mysteries: Who’s the better quarterback – Tom Brady or Aaron Rodgers?

A crew from NBC Sports flew in to Wisconsin to spend a couple of days in Green Bay and ask Green Bay fans whether Brady or Rodgers is the greatest. Then, they headed to Madison to film Ellenberg in a vintage Bascom Hall classroom in Bascom Hall, where he made the case that if you crunch the numbers, Rodgers comes out on top.

Another production crew is setting out later this week to talk to a professor from Boston College about who wins according to his math in a Rodgers/Brady match-up.

No one here is biased, but it already seems clear Ellenberg makes a more convincing case. After all, he is the author of the bestseller “How Not to be Wrong.”