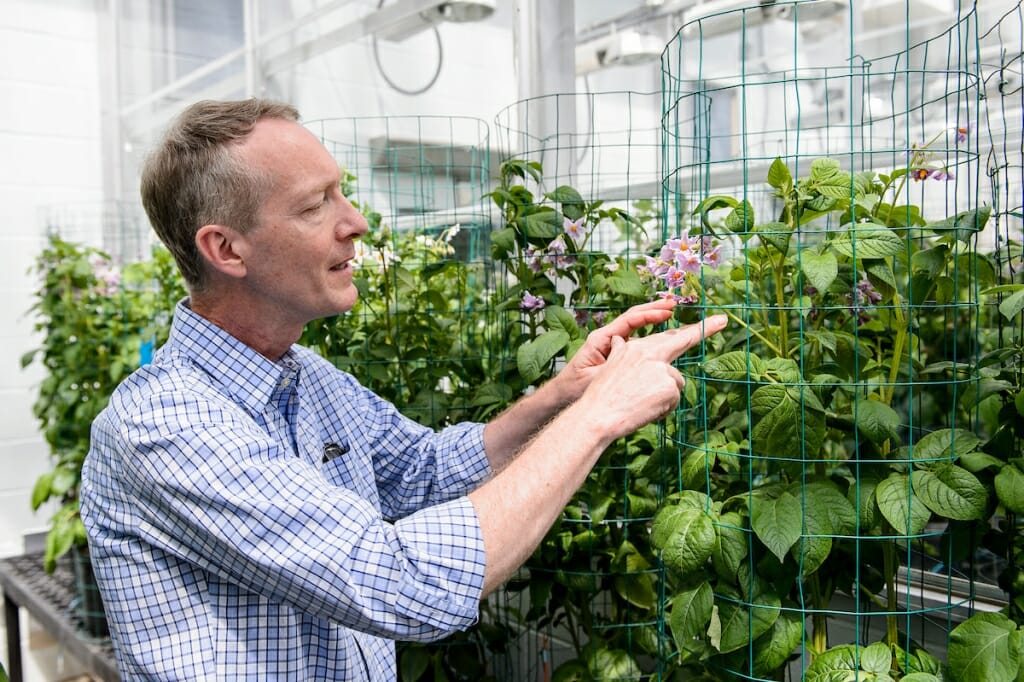 Paul Bethke, associate professor of horticulture, checks on a variety of potato plants housed in wire cages inside a greenhouse at the Biotron Laboratory in 2015. The plants are used to study resistance to heat stress-induced degradation of potato chip quality. Photo by: Bryce Richter 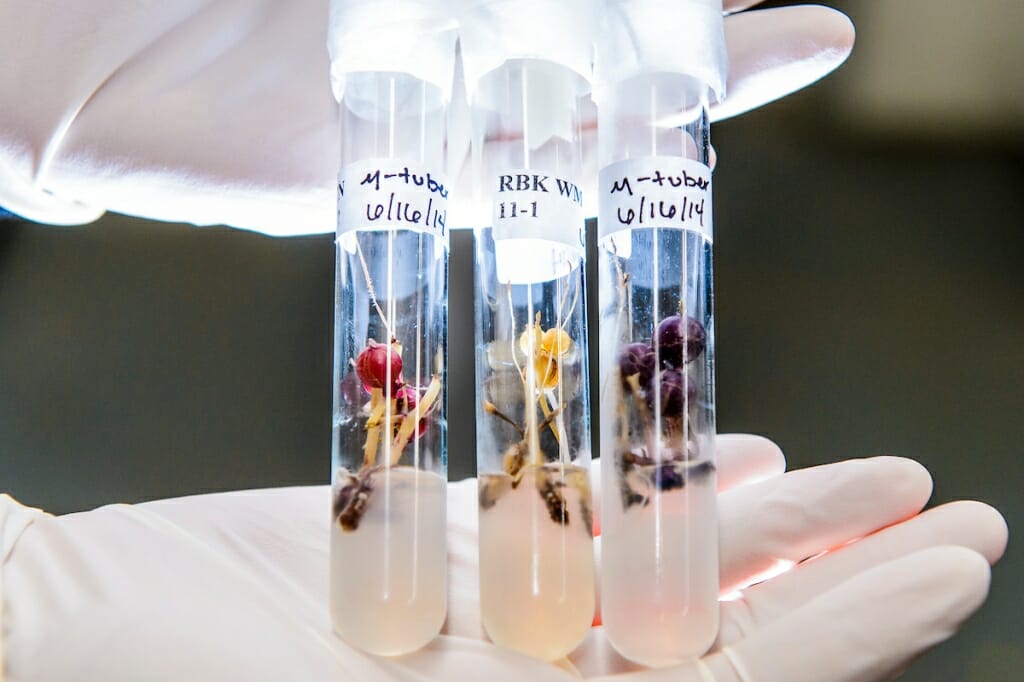 Microtuber potato cultivars (red, russet and purple) used in research by the Wisconsin Seed Potato Certification Program (WSPCP) are housed in test tubes inside an environmentally-controlled growth room at the Biotron Laboratory in 2015. The goal of the WSPCP is to provide Wisconsin potato farmers with seed potato planting stock that is healthy and without varietal mixture. Photo by: Bryce Richter 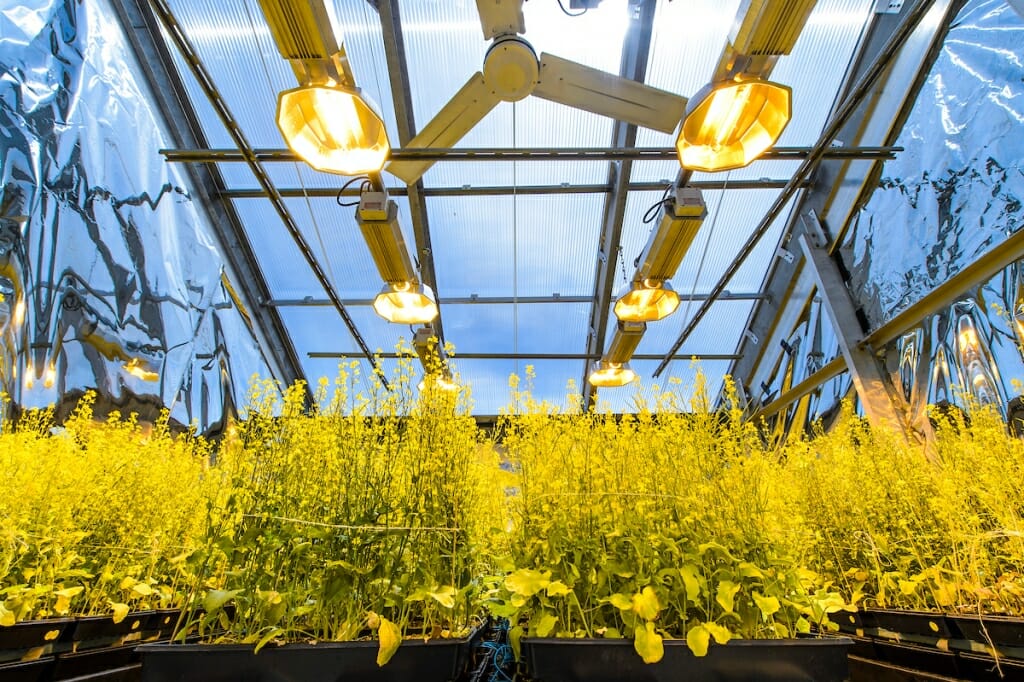 Flats of the rapid-cycling Brassica plant are housed in a greenhouse in the Biotron Laboratory in 2015. The seeds from these plants are distributed to researchers around the world. Photo by: Bryce Richter 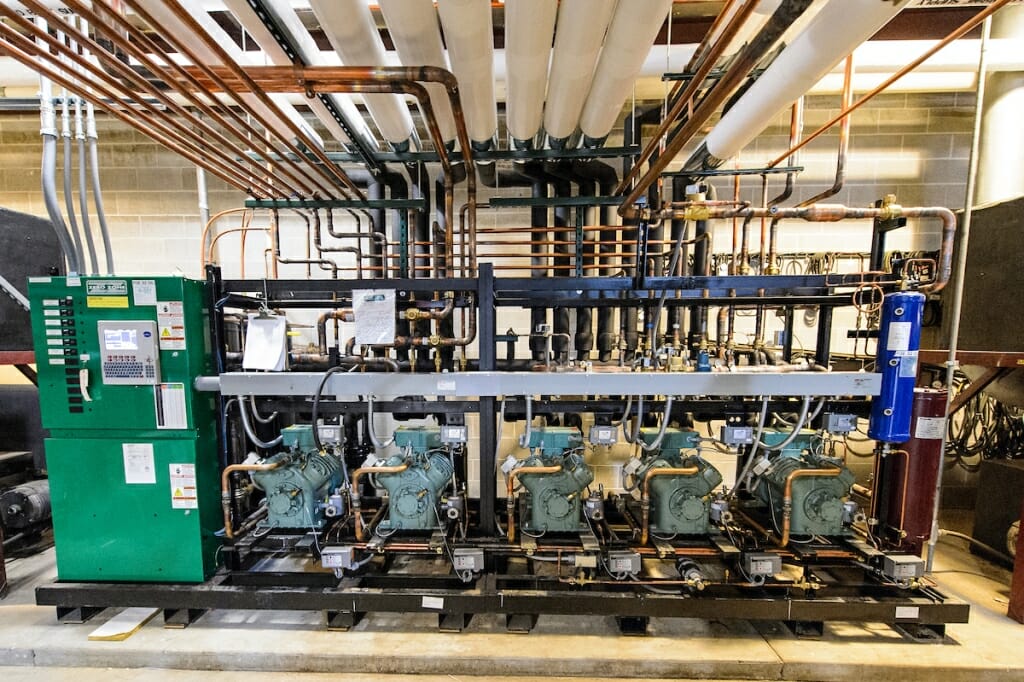 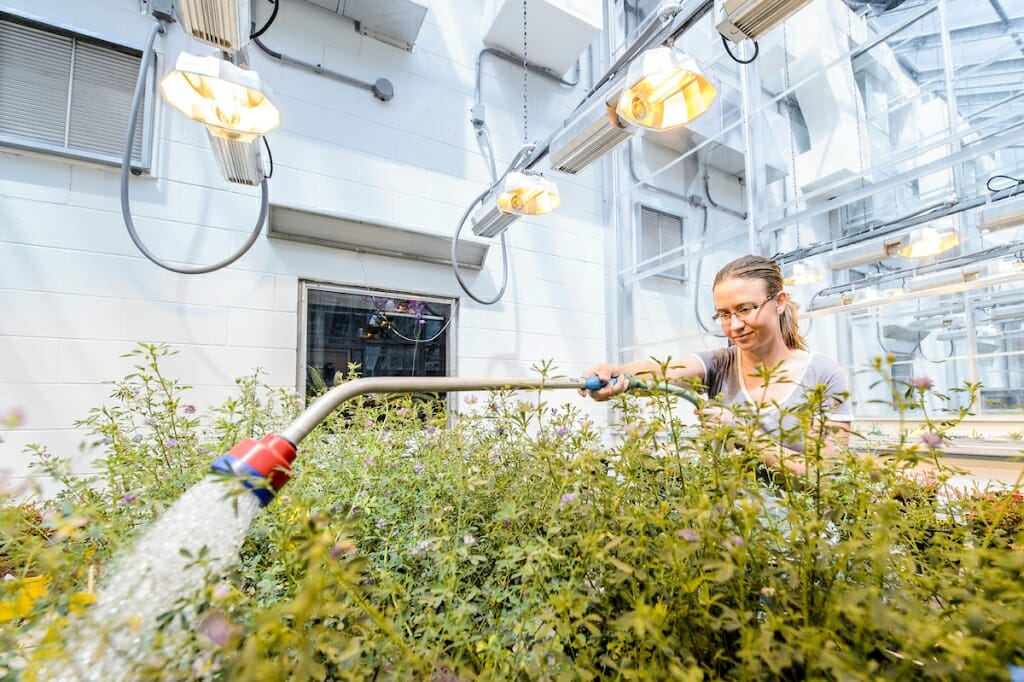 Graduate student Erin McMahan waters an assortment of alfalfa plants inside a greenhouse at the Biotron Laboratory in 2015. The alfalfa plants are used as a control plant for a study seeking to find a cranberry plant that is resistant to sparganothis fruit worm, a major pest of Wisconsin cranberries. Photo by: Bryce Richter 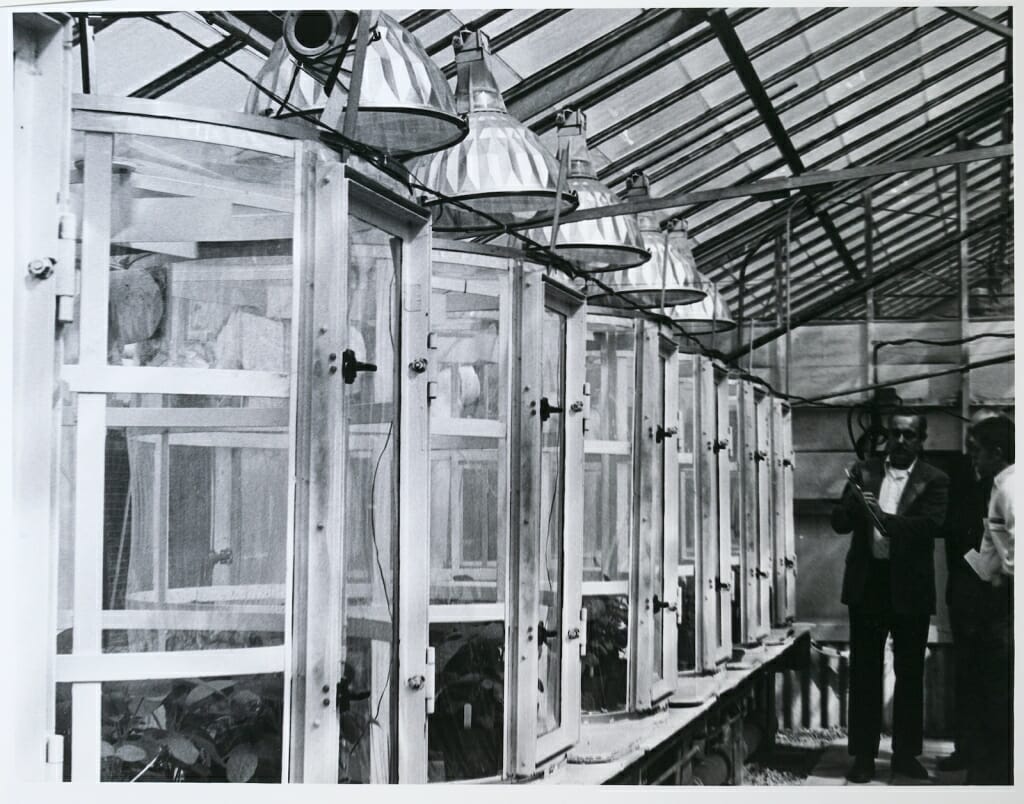 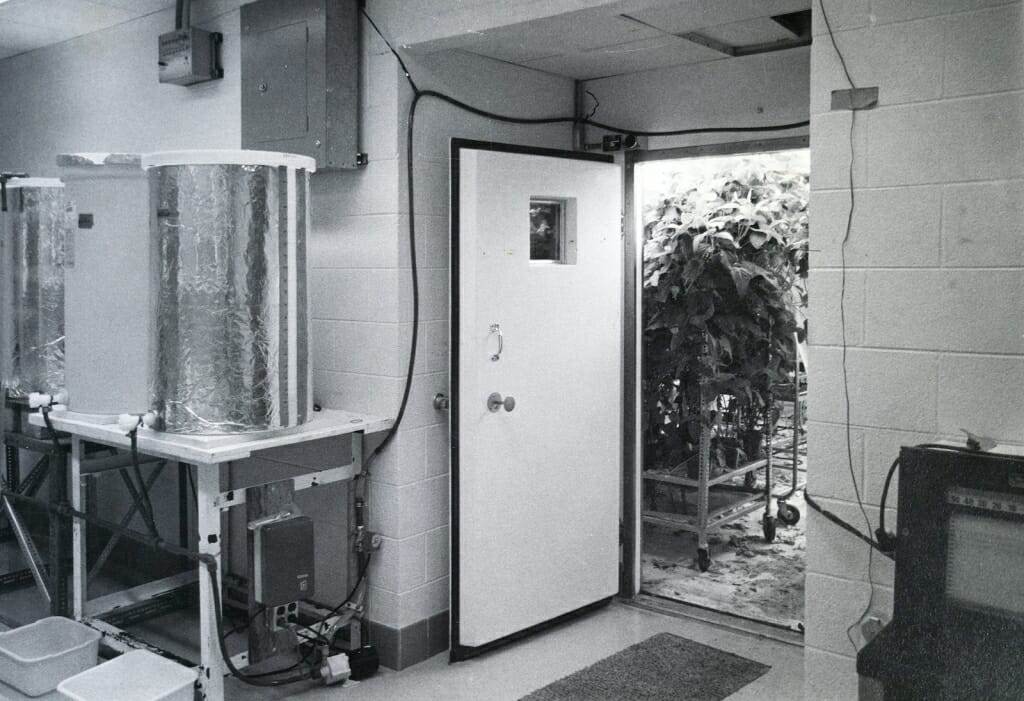 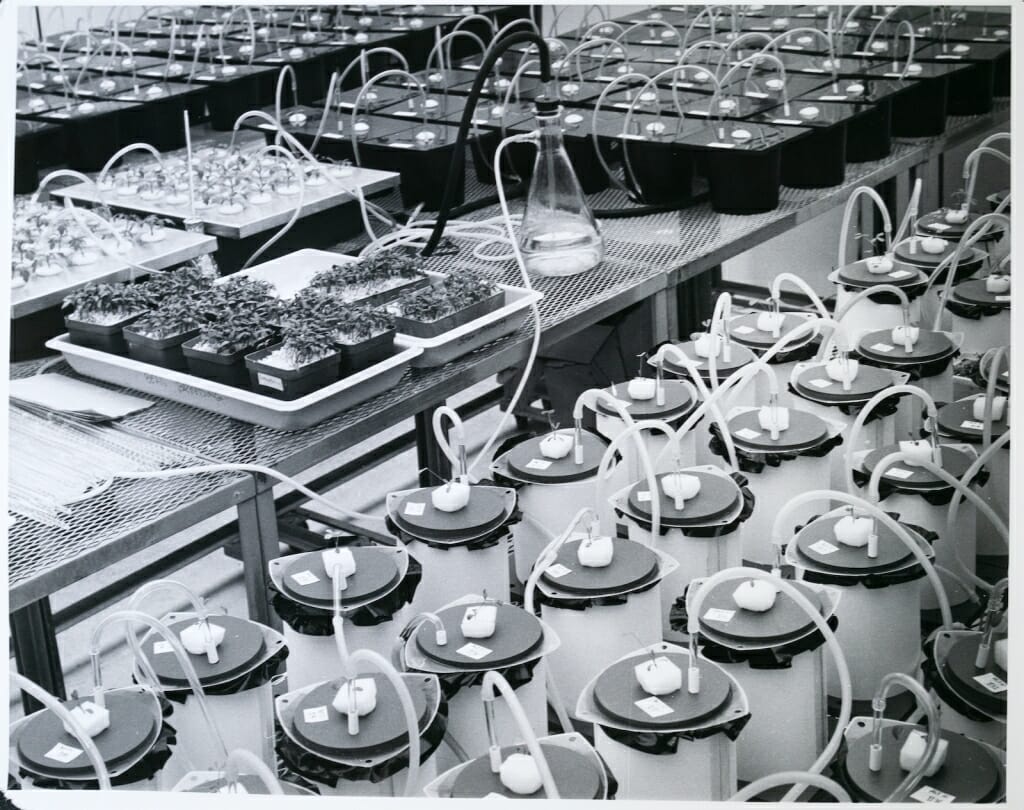 Experiments are programmable with watering and other additives done on an automatic schedule as needed. Room performance is continuously monitored and alarmed, and staff respond to critical deviations 24 hours per day. UW file photo 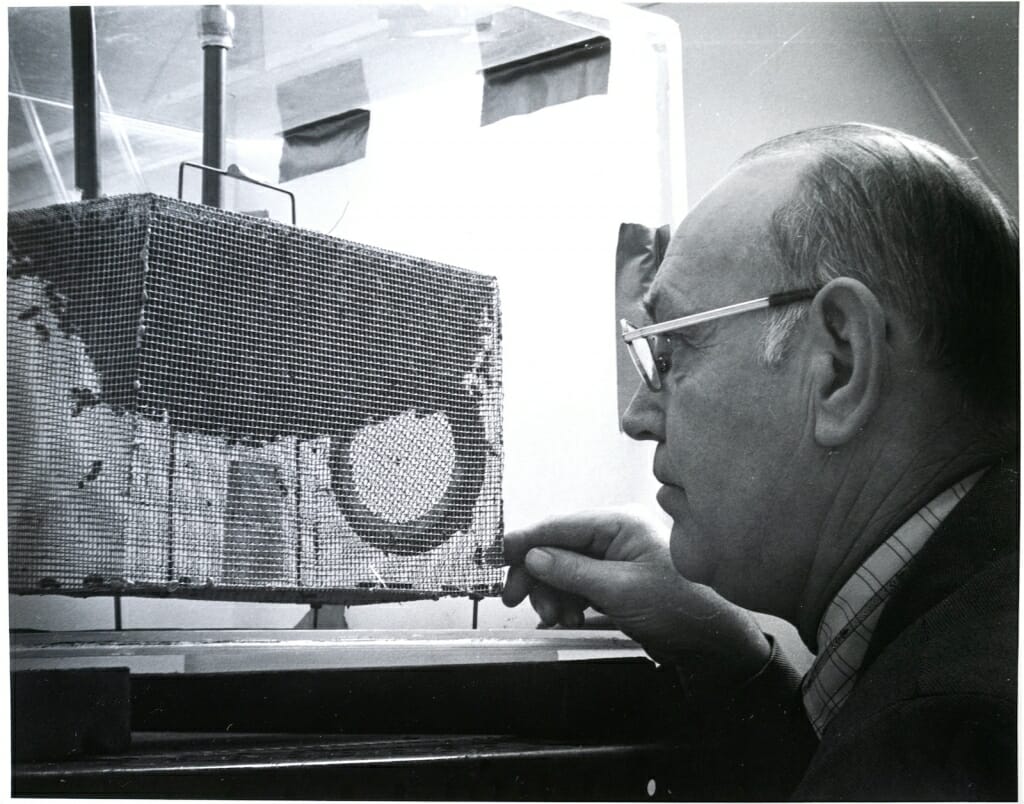 Throughout its history, the Biotron has offered controlled testing environments for academic and commercial clients in plant, animal, and even materials research. UW file photo 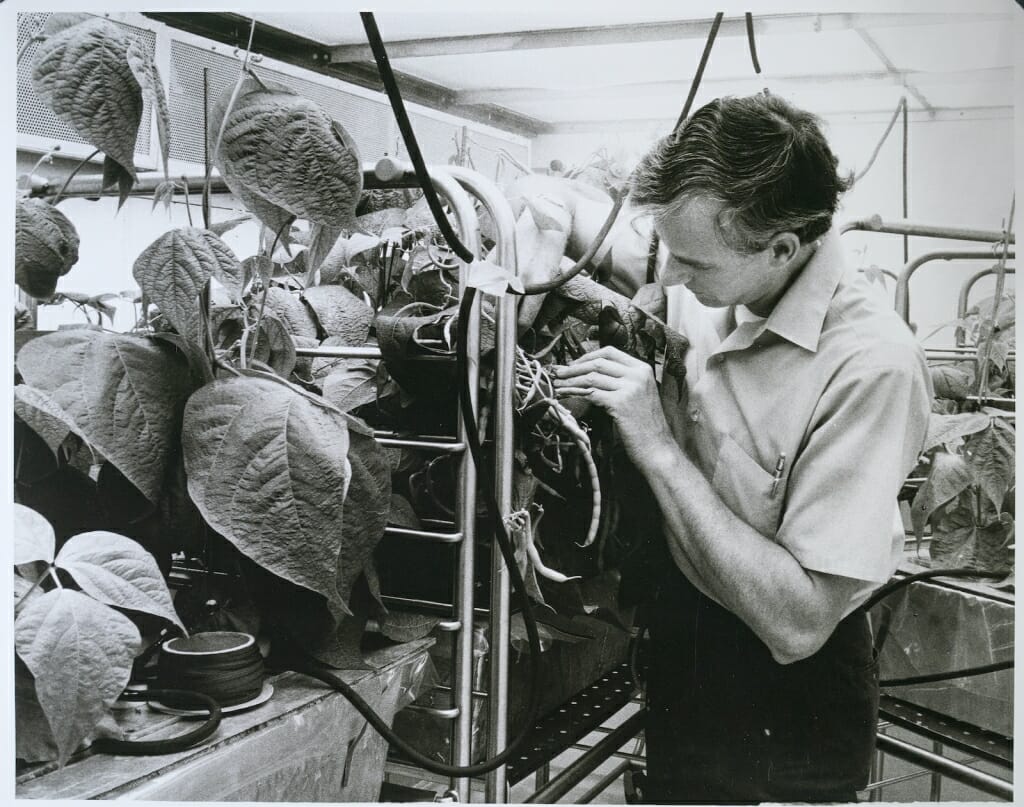 Since the first research project was initiated there in May 1967, the Biotron Laboratory on the west end of campus has been one of a few research centers in the world capable of simulating a range of environmental variables with precision and control for studying plants, animals and materials.

“The Biotron and its staff have made substantial contributions to the research of its academic and commercial clients, who come from as close as campus and as far away as the International Space Station,” says Steve Ackerman, vice chancellor for research and graduate education. “The Biotron has met the goals that it was intended to and has been the model for controlled environments and climate-controlled greenhouses.”

However, concerns about supporting the building’s aging infrastructure in the decades to come has led the Office of the Vice Chancellor for Research and Graduate Education to announce that the Biotron will end its run as a research center by the spring of 2021. Other UW labs and research cores are stepping up to fulfill requests to help continue the studies that previously could only be done at the Biotron.

And it has been quite a run.  In 50 years, the Biotron has been written up in the New York Times, played an important role in NASA research, and even served as a hatchery for a pair of rare Siberian cranes. 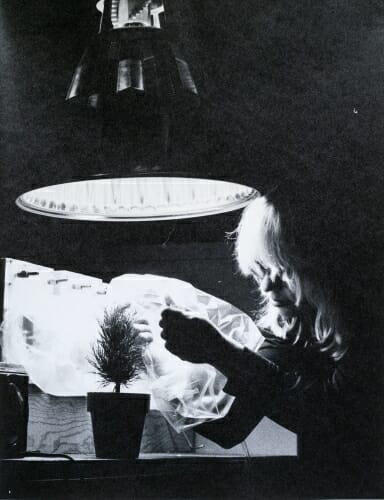 “The 50 years of research supported by the Biotron has led to major discoveries in a wide variety of fields within the life and physical sciences, as well as engineering,” says Biotron Director Hannah Carey, a professor of comparative biosciences in the UW–Madison School of Veterinary Medicine. “It also has provided research training for countless undergraduates, graduate students, and postdoctoral fellows. As director for the last 12 years and a Biotron user for the last 30, it’s been an honor and pleasure to work with the outstanding staff that have been indispensable to the operations of this unique research facility.”

A story in The New York Times on Sept. 19, 1970 covering the Biotron’s opening portrayed this scene: “Dr. Warren Porter, a young zoologist, was overjoyed when his desert lizard emerged from its burrow at 10:23 today. It was only a minute earlier than the Professor had predicted after weeks of studying how the slightest environmental changes affect a lizard’s daily life. Down the hall from the lizard’s desertlike chamber, other scientists at the University of Wisconsin here were simulating the steamy environment of Nigeria and the wind-howling Arctic. They were also studying the effects of temperature on the alfalfa weevil, DDT absorption by quail and the growth rates of viruses in mosquitoes.”

The Biotron was designed so its 45 individually ventilated and isolated interior rooms could be controlled by building automation software. Temperature, humidity, lighting, and plant watering regimens could be scheduled and controlled to meet precise experimental set points. Room performance could be continuously monitored and alarmed. Standard animal rooms made possible work with domestic or wild animals of all sizes. 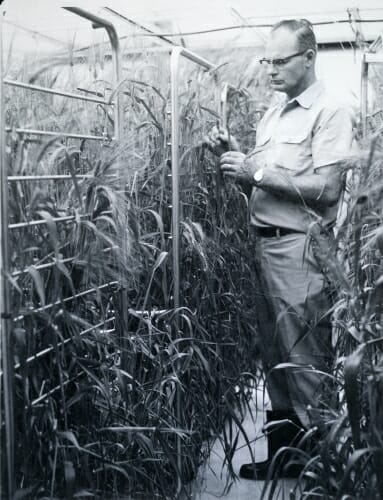 8. Flexibility of experimental conditions at the Biotron has drawn in industrial clients that subject their products to extremes and benchmark their performance in precisely monitored conditions. And it gives academic researchers the opportunity to design experiments that couldn’t happen in conventional lab space – or without committing substantial time and money to one-off lab construction. UW file photo

The staff characterize the Biotron as a “hotel for scientists.”

Says Brad Ricker, former assistant director of the Biotron, “Some of our clients have been here for decades, but for others, their stay is just a few weeks and then we don’t see them for a while until they need to use the facility again.”

Over the decades, Biotron’s flexibility in climate control has drawn clients from Harley Davidson to the Middleton-based Springs Window Fashions, which found the facility useful for testing their products in environmental extremes and benchmarking performance in precisely monitored conditions. The Wisconsin Seed Potato Certification Tissue Culture Laboratory has conducted its research at Biotron on potato-killing infections while also supplying seed stock for nearly all the publicly available varieties of potatoes grown in Wisconsin.

In its early days, thanks to the efforts of the nearby International Crane Foundation in Baraboo, the facility served as hatchery for a pair of Siberian cranes, whose eggs were hand-delivered from the USSR.

Carey has used the Biotron to study how hibernating ground squirrels adapt to annual cycles of reduced metabolism and long-term fasting.

Biotron is also the place that plants were first grown using LED lights in 1986. And in December of that same year, NASA astronauts on the International Space Station grew food in space for the first time, harvesting and eating lettuce they grew under LED lights.

It was also here that NASA conducted tests on the Galileo probe before its journey to Jupiter in 1989. The probe was tested in a wind tunnel to get information about the behavior of the components at temperatures below the freezing point of water.

The facility has also served as a testing ground for Antarctic drilling equipment and medical devices, like insulin pumps, which were subjected to high altitude conditions in the Biotron’s hypobaric pressure chamber, capable of simulating altitudes over 10,000 feet, to ensure they functioned properly.

Materials sciences engineers have used the temperature-controlled rooms to test the resilience of a variety of substances. For instance, a concrete team subjected four tons of concrete to several years of summer and winter temperature extremes in two months. The Babcock creamery has run experiments on their cheeses using the Biotron.

“The Biotron’s history is testament to the innovation that has built UW–Madison’s reputation as a world class research enterprise,” says Ackerman. “We’ve learned a lot from Biotron’s success and there is much to celebrate. I’m grateful for the five decades of research at the Biotron and it has led us to a better understanding of the possibilities that exist when creativity meets collaboration.”