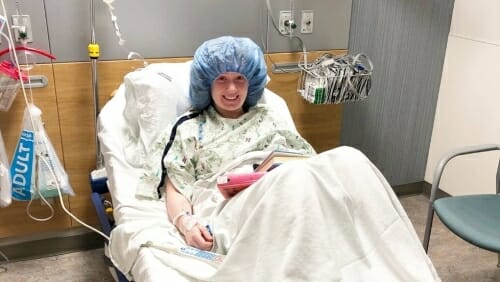 Rahe, a UW alum, signed up for Be The Match’s marrow registry. She was eventually identified as a ‘match’ to a blood cancer patient. Kelsey Rahe

When UW–Madison alum Kelsey Rahe was called to potentially save a stranger’s life, it felt like the world was working in mysterious ways.

Just a day after the one-year anniversary of her mother’s death, she went through a surgical procedure to donate her bone marrow — making her a possible cure for a man with blood cancer. The two strangers were paired through Be The Match — the largest marrow registry in the world — which helps those with blood cancers like leukemia, lymphoma and sickle cell anemia find life-saving marrow donors.

Decked in Badger apparel, Rahe hopped on a flight to a Cincinnati hospital amid the COVID-19 pandemic in March. Her operation entailed a withdrawal of liquid marrow from the back of her pelvic bone through needles. Though Rahe’s donation is considered an act of selflessness, she says it was also a gift for her — one that would honor the life of her mother. 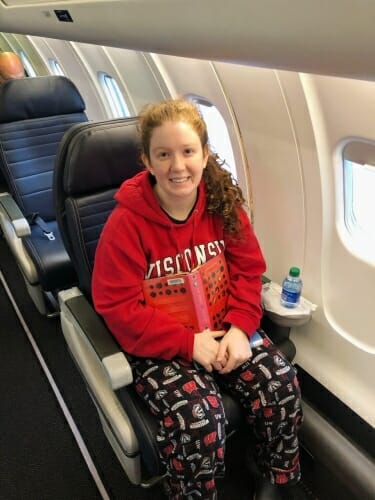 Rahe made sure to sport her Badger pride, even while undergoing a surgical operation. Kelsey Rahe

“I went into it thinking that I was going to be saving somebody else,” she says. “But honestly, even though I don’t know who this person is and I may never end up meeting them, I feel like we saved each other. It definitely helped my family heal.”

Blood cancers affect cells in the immune system that are necessary for survival and fighting infections. Upon transplant, healthy blood-forming cells from the donor’s marrow are put into the patient’s bloodstream. Participants are considered a ‘match’ if they have similar protein markers, which are found on most cells in the body.

Though the process of signing up for the Be The Match registry is as simple as sending a sample of one’s DNA through a cheek swab, the odds that someone is selected to be a potential donor are incredibly rare. Even more rare is the likelihood that they go on to actually donate. Just one in 430 people will be identified as the best possible match to a patient. Still, Rahe says this felt more like fate than chance.

For her, it was meant to be.

“Everything had perfectly fallen into place so that I could be a living memorial for my mom,” she says. “When somebody dies, you wish you could have saved them and had more time with them. To be able to give that to another family was super meaningful.”

Rahe’s act of heroism has even received national recognition. She was featured on ABC’s World News Tonight — a show hosted by David Muir, who was also the UW commencement speaker when Rahe graduated in 2018. 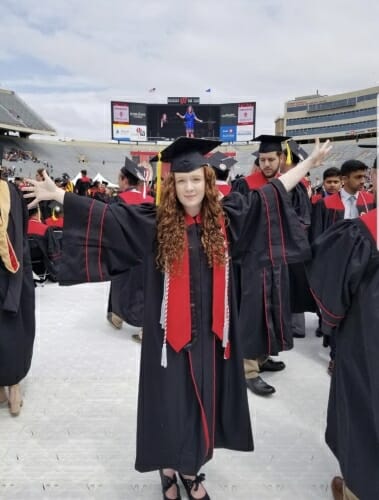 Rahe’s time on campus also played a vital role in her donation. What started as an ordinary day in Dejope’s dining hall eventually resulted in Rahe donating her bone marrow two years later. She signed up for the registry after coming across two members of UW’s Be The Match chapter, who Rahe says she owes her complete gratitude to.

“The donation would have never happened if I hadn’t signed up at school,” she says. “UW’s chapter of Be The Match is super important for empowering students who want to have a positive impact on the state of Wisconsin, the entire nation and potentially the entire world.”

The UW chapter organizes outreach events on campus to encourage student participation in Be The Match. Chris Gitter, a co-president of the student org, says experiences like Rahe’s are an embodiment of the Wisconsin Idea and make the work feel worth it.

“By looking at Kelsey’s donation, it’s the best representation of going beyond the classroom,” he says. “Students on campus want to do something that’s more than just sitting in a lecture, and Be The Match gives you an opportunity to very easily make a difference.”

As a survivor of leukemia, Gitter says being a part of these efforts is especially important to him. He estimates that the UW chapter signs up more than 100 participants for the registry each year. Referencing that cells from younger donors lead to better long-term survival for patients after transplant, he says the organization’s efforts on campus are crucial. 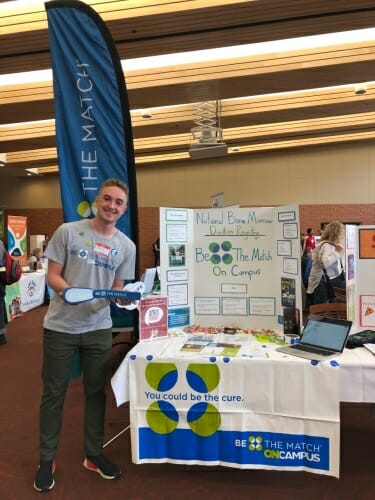 Gitter is the co-president of UW’s chapter of Be The Match. The organization encourages students to sign up for the marrow registry. Chris Gitter

“College-age kids are the most important for the registry because they’re on it until they’re in their 60s,” he says. “It’s incredibly selfless because we’re some of the healthiest that we’re going to be in our lives right now and our bone marrow is very healthy.”

As the pandemic has closed borders and limited physical contact across the world, Be The Match’s bone marrow donations have been particularly impacted. According to the Be the Match website, blood cancer patients are among the most vulnerable populations affected by COVID-19. That has energized the organization even more in continuing to find potential matches.

In fact, now — more than ever — students need to participate in order to save lives, Gitter says. The UW chapter is currently taking part in the Couch2Cure campaign, where people can sign up for the registry while remaining socially distant. Be The Match sends a free swab kit for participants to have their DNA tested, allowing them to join the registry from the comfort of their own couches. As a nonprofit, the organization is also seeking monetary contributions so it can continue covering donors’ travel and medical expenses.

“I think that a lot of people are sitting at home and feeling powerless,” Rahe says. “People feel like there’s nothing they can do to help, but I think signing up and working with Be The Match is a great way to take some of your power back.”

To Rahe, the pandemic shouldn’t stop others from doing their part. In fact, she says now is the perfect time to help those in need.

“Even just signing up is giving so many people who are currently looking for matches some hope,” she says. “It’s an opportunity to potentially save their lives and give them more time with their families.”

to Join the registry, head here.