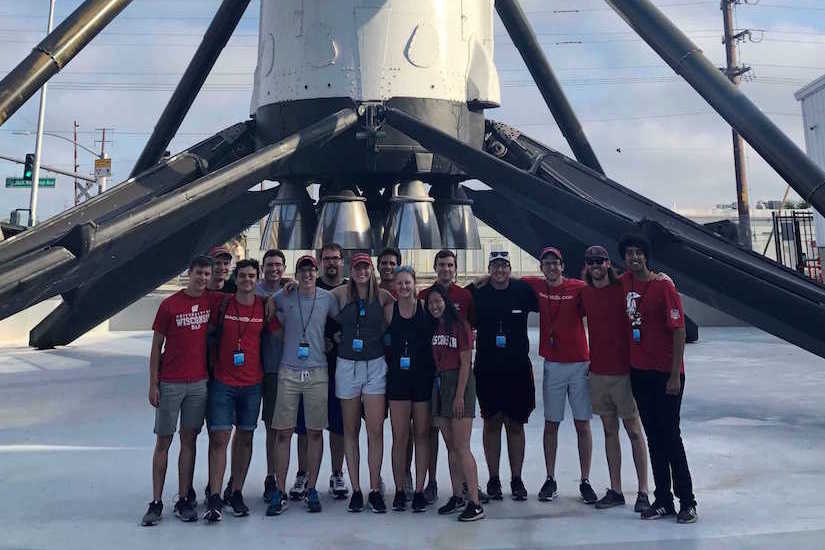 Members of the Badgerloop team at the 2019 SpaceX Hyperloop Competition in Hawthorne, California. Photo courtesy of BadgerLoop

HAWTHORNE, CALIFORNIA – Students from the University of Wisconsin–Madison are facing off against teams from around the world with their concept for an ultrafast futuristic form of transportation in the fourth annual SpaceX Hyperloop Competition, which culminates after a week of testing on July 21, 2019.

Hyperloop, the modernist concept for mass transit that hinges on sealed pods traversing airtight tunnels at supersonic speeds, could someday shuttle people the 400-plus miles between Chicago and Minneapolis in as few as 20 minutes. 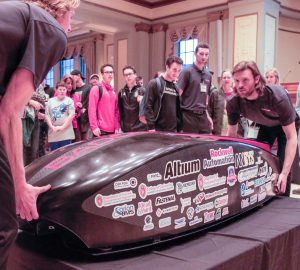 Held at SpaceX headquarters in Hawthorne, California, the SpaceX Hyperloop Competition pits teams from universities around the world against each other in a friendly contest designed to foster innovation. For the past three years, Badgerloop—the majority-undergraduate and entirely self-supported team from UW–Madison—has punched above its weight among a competitive field including teams comprised of PhD-level researchers, earning two back-to-back innovation awards and recognition for excellence.

In 2019, the students are optimistic about their prospects. They’ve improved upon their strong showing from 2018, updating their pod’s direct-drive propulsion system, and revamping their electronics containment to more effectively contain the sensitive components in an airtight seal.

If the Badgerloop team is cleared to send its pod through the mile-long SpaceX hyperloop test track in the California desert, the students anticipate achieving a top speed of well over 100 miles per hour.

In the week leading up to the contest, Badgerloop will put its pod through a demanding series of technical and safety tests to demonstrate that the vessel can withstand the high speeds and airless environment inside the test track.

The students have already begun the process, holing up until late in the evening in the garage facilities at Bulletproof Automotive and Unplugged Performance, a premium car performance upgrade company in California. They’ve been making sure their pod was not damaged in transit between Wisconsin and California and getting ready for the demanding week ahead.

Multimedia from the previous four competitions available at: https://uwmadison.app.box.com/s/lcwtk5kq4at3ghis3d55yery2kv7ngsa