At University Hospital, damage and shock in aftermath of 1970 Sterling Hall bombing 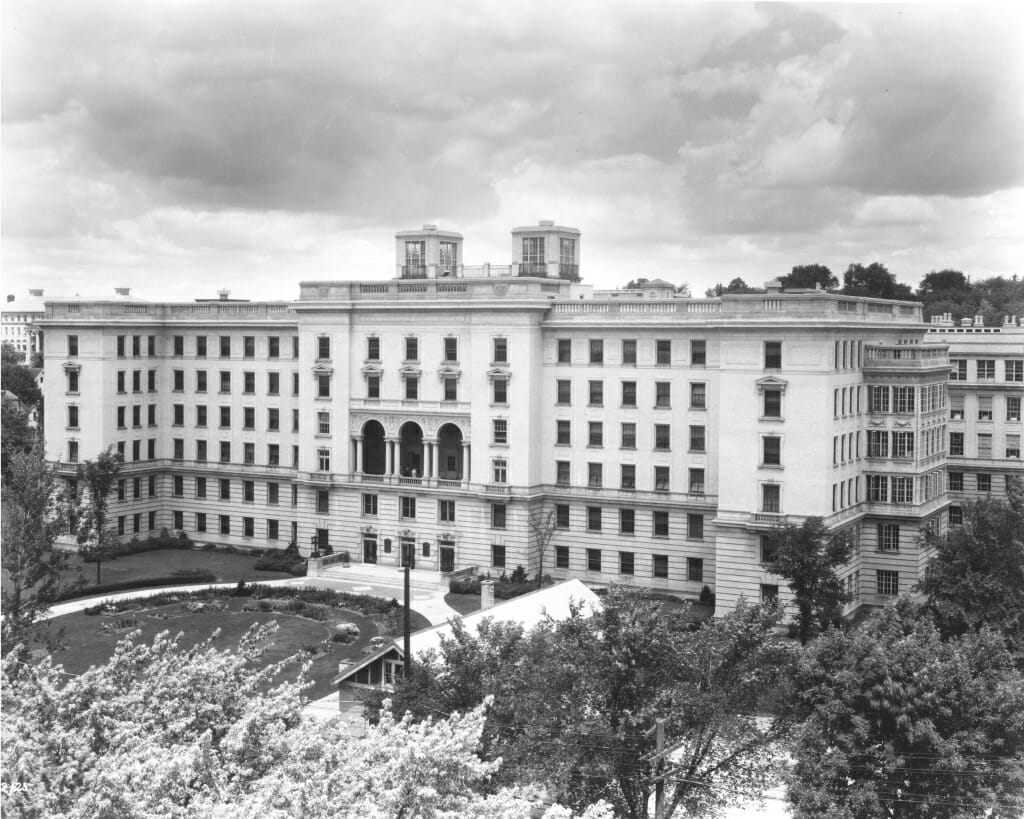 The phone call jolted Sally Christiansen out of bed. Her employer, University Hospital, needed her to report immediately.

A bomb had torn through Sterling Hall on the UW–Madison campus during the early morning hours of Aug. 24, 1970. The hospital, located across Charter Street from Sterling Hall at the time, suffered damage, too. The blast shattered most of its east-facing windows, including those in the intensive care unit.

“Our assignment was to pick glass off of patients,” remembers Christiansen, a nursing student who worked at the hospital. “It was horrible, just horrible. You had people who were psychotic and in very bad shape in the ICU, and then we were trying to pick shards of glass off them and make sure they didn’t move and get cut.”

The bombing, planned by four young men opposed to the Army Mathematics Research Center at Sterling Hall, killed physics researcher Robert Fassnacht and injured four others, including one hospital patient. Given the hospital’s proximity to Sterling Hall, employees look back with great relief that patients or staff members weren’t seriously injured or killed.

“It remains very surprising to me that one of our patients who already was so medically compromised didn’t die from the explosion,” says Gary Mecklenburg, who was 24 at the time and new to his job as an assistant to the hospital superintendent. 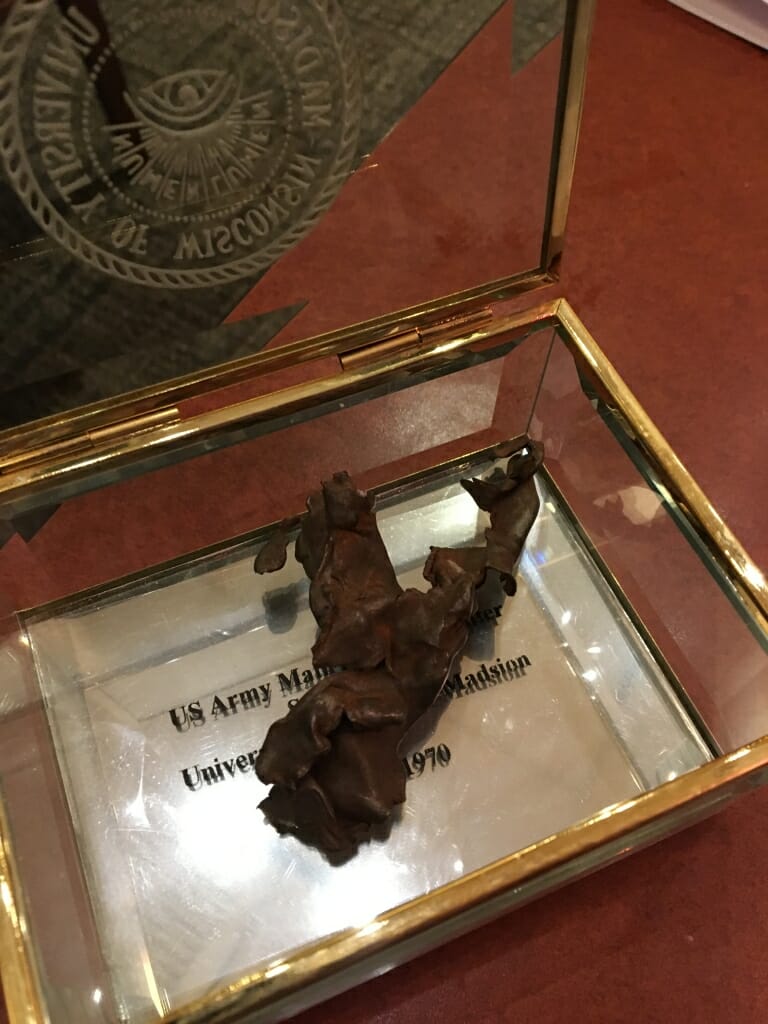 Gary Mecklenburg keeps this piece of debris on his desk as a reminder of the violence that struck the UW–Madison campus on Aug. 24, 1970. It is likely a piece of the van that housed the bomb that tore through Sterling Hall. Photo: Doug Erickson

Christiansen recalls thinking, “Why would someone set off a bomb across from a hospital?”

“It was the worst place you could have chosen, with people already suffering major injuries,” she says. “It was such a terribly unfortunate thing to have happen to very vulnerable people.”

On the 50th anniversary of the bombing, staff members are remembering the shock that gripped the hospital.

“It was unbelievable that this was happening,” says Jim Varnum, 80, the hospital’s superintendent at the time. “People were scared and upset and rightly so. There really wasn’t any understanding of what had happened because people were still trying to put the pieces together.”

Pharmacy intern Annette Richter remembers the blast causing cardiac ICU patients to jump out of bed, tearing out their IV lines. Nurse Jean Espenshade was hanging a glass IV bottle near a patient’s head when the bomb exploded.

“I felt the heat, a flash of light lit the room, and the force threw me back across the foot of the patient’s bed, which was near a window,” she says. “I thought something had happened right there in the room, like a respirator had exploded.”

The glass IV bottle imploded, inflicting a small facial cut on the patient. The patient was one of the four injured that day. The other three — a security guard and two physics researchers — were inside Sterling Hall.

When Espenshade looked out the window, she could see smoke, but it was too dark to discern what had happened. It would be hours before she learned it was a bomb.

“Today, news travels so quickly with all the media coverage,” she says. “In those days, a story was much slower to develop.” 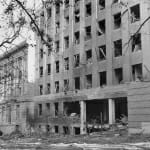 Related: “The Blast That Changed Everything” — a 50-year perspective on the Sterling Hall bombing from alumni who lived through it, from On Wisconsin magazine.

In a later report describing the impact on the hospital and its adjoining medical complex, the university described the result of the bombing as “plywood by the hundreds of square feet, broken glass by the bushel basketful, broken light bulbs by the dozens, people by the thousands swarming all over the medical center campus, and research losses amounting to much time and thousands of dollars.”

The report noted that about 80 percent of the hospital windows fronting Charter Street were blown out. The cost to replace and repair them was put at $30,000, equivalent to nearly $200,000 in today’s dollars.

At the time of the bombing, planning already was well underway to relocate the hospital. The hospital needed more space, and there was a consensus that being in the heart of campus during the unrest of the anti-Vietnam War era was not ideal for the safety of patients, Varnum says. UW Hospital and Clinics moved to 600 Highland Avenue in 1979.

After arriving at the hospital following the blast, Mecklenburg remembers wandering outside and seeing bomb debris littering the grass — thousands and thousands of small pieces, including parts of the blown-up van the bombers used to detonate the explosives.

“That’s war stuff,” he says today. “If anyone had been walking down the sidewalk, it would have killed them.”

Mecklenburg scooped up a few pieces of mangled debris and has kept them on his desk ever since.

“It’s a reminder of what I’ve lived through, and it’s a reminder of the awful domestic violence of the 1960s and 1970s,” he says. “It’s a piece of that very violent part of our society that sort of ebbs and flows. Hopefully we can all work toward a better world where this kind of stuff doesn’t happen.”