Arboretum: A slice of nature and ecological history in the city 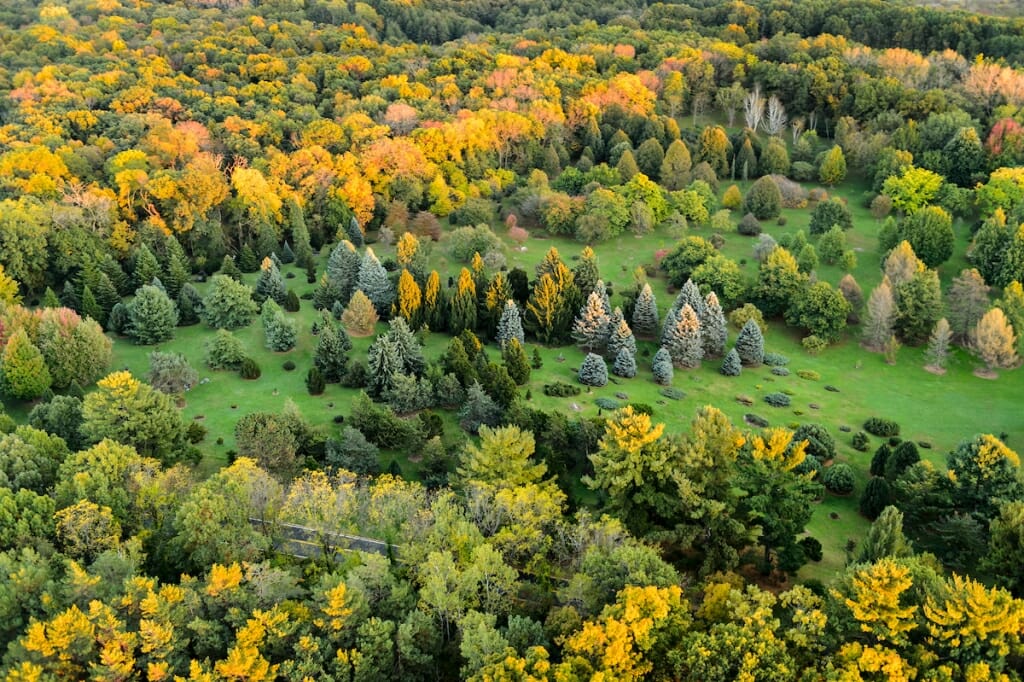 Students at the University of Wisconsin–Madison are fortunate to have many places where they can escape the campus hustle and bustle and get in touch with nature.

Whether it be a bike ride down the Lakeshore Path or a rewarding run to the end of Picnic Point, Badgers have access to natural places where they can unwind and relax.

With finals on the horizon and students looking for a way to lower stress, they should be sure not to overlook the university’s incredible Arboretum. Located approximately a mile south of the heart of campus, the Arboretum offers natural areas lining the coast of Lake Wingra and is a truly unique asset. 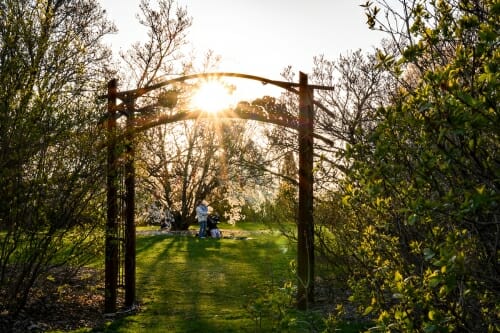 The idea of a University Arboretum was first proposed by landscape architect John Nolen in his 1911 report, “Madison: A Model City.” However, the plans truly picked up steam in 1925 when Michael Olbrich began raising money to preserve the space. Olbrich had a vision for the Arboretum being a purposeful space, hoping that it would act as a wildlife sanctuary, experimental forest preserve, protected area for sacred Native American sites, and a place to experiment with re-establishing historical Wisconsin landscapes.

With this vision in mind, Olbrich was able to convince the UW Board of Regents in 1927 to aid in the purchasing of the space for the “Forest Preserve Arboretum and Wild Life Refuge,” with the initial acquisition for 246 acres of land finally occurring on April 26, 1932. Two years later, the Arboretum grew to 500 acres and officially dedicated on June 17, 1934.

During the formal dedication ceremony for the Arboretum, the father of wildlife ecology and UW alumnus, Aldo Leopold, stated that the aim for the Arboretum was to re-establish the “original Wisconsin” landscape and plant communities that had been lost due to European settlement. This process that Leopold outlined of re-establishing lost ecosystems introduced a new concept to the study of ecology, “ecological restoration,” making the arboretum a place that pioneered the restoration and management of ecological communities. 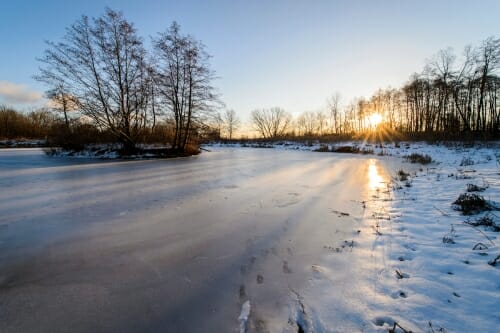 In winter, the Arboretum has a stark beauty. The sun rises over the frozen Duck Pond. Photo: Bryce Richter

From 1934 until today, the vision and goals for the Arboretum have remained strong, but there have been a number of changes to the space itself. Today the Arboretum comprises 1,200 acres of preserved natural space, and most of this current land holding came from gifts and purchases when land was cheap during the Great Depression. Along with cheap land, the Great Depression provided a ready supply of willing and able workers who between 1935 and 1941, provided most of the labor required to begin restoring the lost ecological communities.

The efforts of these hard workers were not in vain as the restored ecological sites still remain to this day.  Today, the Arboretum is home to the world’s oldest restored prairie along with an extensive collection of other restored ecosystems. Along with diverse ecosystems, the Arboretum’s Longenecker Horticultural gardens has labeled plants, trees and shrubs from around the world. It also has the Native Plant Garden surrounding the Visitor Center, as well as Viburnum Gardens along Nakoma Road.

After years of setting an example, it is clear that the Arboretum has fulfilled its vision of acting as a “global source of knowledge of and a model for restoring ecologically sustainable relationships between people and the land through integrative, innovative, and collaborative approaches in science, stewardship, education, and public engagement.” However, the Arboretum is more than just a source of knowledge and an example of ethical land use. It is also an incredible resource for Wisconsin students looking to get active and take advantage of the natural beauty our state has to offer. 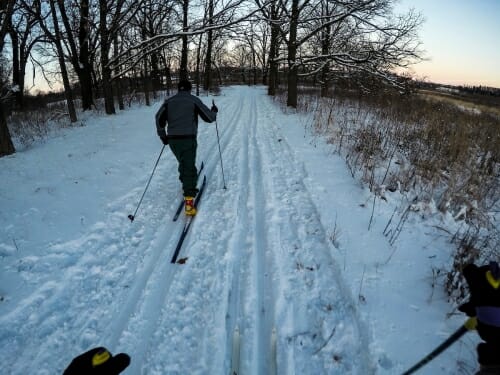 Cross country skiing along the snow-covered trails of Curtis Prairie at the Arboretum. Photo: Jeff Miller

One of my personal favorite activities at the Arboretum is to simply go for a run and clear my head during our seemingly endless midterm season. For students who are looking for easy access from campus, enter the Arboretum from the east entrance, which is located a mile south of campus at the intersection of Mills Street and North Wingra Drive. From there, runners can trot down the paved roadways lining the shore of Lake Wingra, taking in the beautiful weather and scenery that the Lake has to provide.

However, for people looking to get off the beaten path and immerse themselves in nature, the Arboretum also has numerous maintained running trails through all of their restored ecological communities. Whether you wish to get lost in the woods and enjoy the last of fall foliage or you hope to evoke the experience of the pioneer days in the restored prairies, you will find plenty of locations to explore. 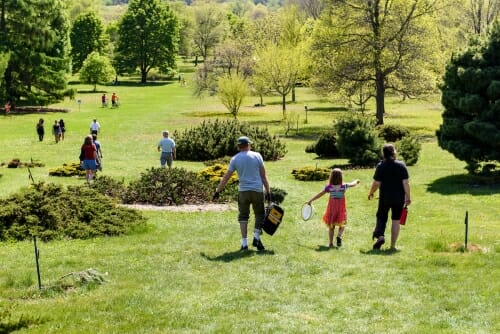 A steady stream of families and groups of people enjoy the flowering trees and springtime view at the Arboretum on Mother’s Day in 2016.

The Arboretum activities are not limited to the warmer months however. During the impending chilly months of winter ahead, visitors to the arboretum can gain a new perspective on the restored ecological communities by snowshoeing and cross-country skiing. This is certainly one of my personal favorite activities during the winter months because it gives me a fun reason to bear the elements and explore the outdoors.

Aside from the activities, the Arboretum also offers many ways to get involved. Dedicated volunteers work to ensure the success of the Arboretum’s ecological communities, helping with restoration, gardening or plant propagation. In addition, the Arboretum has plenty of free events and programs for individuals who simply want to experience and learn more about the outdoors.

Find out how you can experience Wisconsin’s historical Arboretum for yourself! 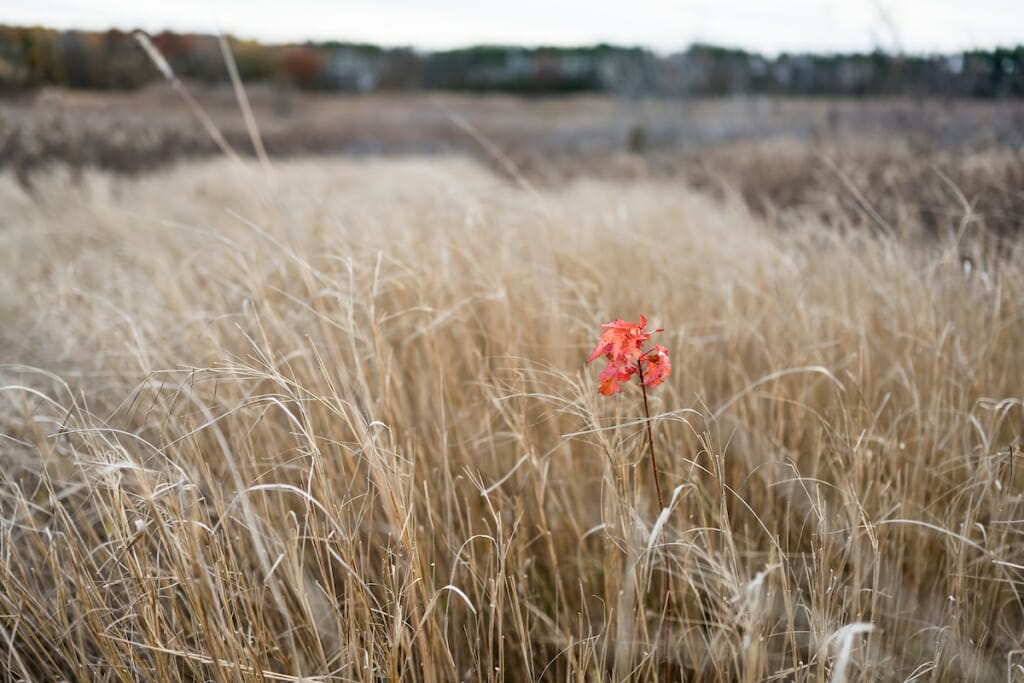 A rogue Amur maple sapling — an invasive tree species — adds a pop of color amid a stand of prairie grass in the University of Wisconsin–Madison Arboretum’s Curtis Prairie during late autumn on Oct. 31, 2018. (Photo by Jeff Miller / UW–Madison) Photo: Jeff Miller