Scientists have long speculated that our planet’s climate system is intimately linked to the Earth’s celestial motions.

The pacing of the most recent ice ages, for example, is attributable to changes in the shape of our planet’s orbit around the sun as well as to cyclic changes in the tilt of the Earth on its axis and its “top-like” wobble on that axis, all of which combine to influence the distribution and intensity of solar radiation.

Now, it turns out that variations in the axial tilt — what scientists call “obliquity” — of the planet have significant implications for the rise and fall of the Antarctic Ice Sheet, the miles-deep blanket of ice that locks up huge volumes of water that, if melted, would dramatically elevate sea level and alter the world’s coastlines.

Writing this week (Jan. 14, 2019) in the journal Nature Geoscience, a team led by Richard Levy of New Zealand’s GNS Science and Victoria University of Wellington, and Stephen Meyers of the University of Wisconsin–Madison describes research that matches the geologic record of Antarctica’s ice with the periodic astronomical motions of the Earth. Comparing the two records, the New Zealand and Wisconsin researchers recapitulate the history of the Antarctic Ice Sheet throughout most of the past 34 million years, starting when the ice sheet first formed. 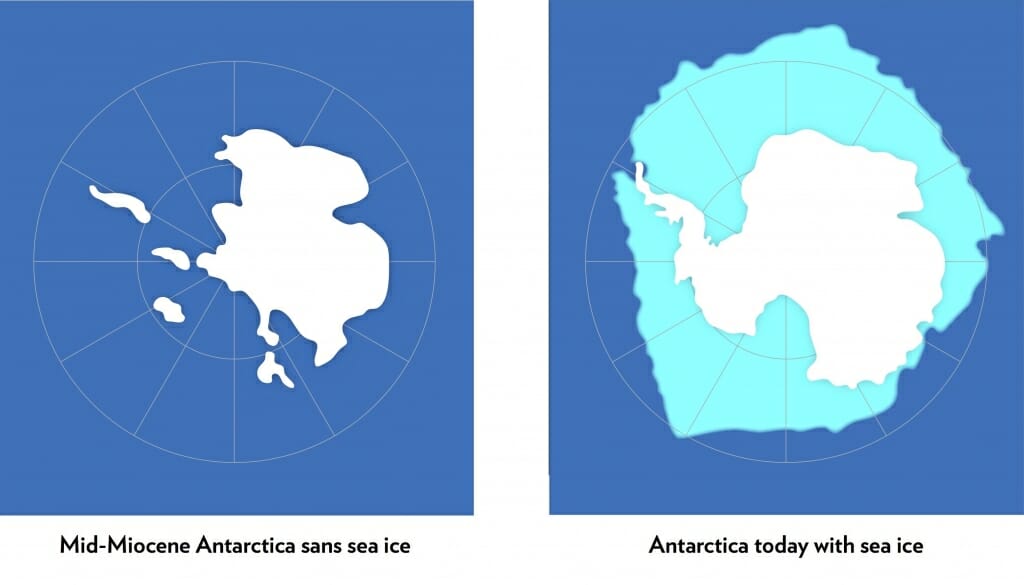 Roughly 15 million years ago, when Earth’s atmosphere was supercharged with carbon dioxide, oceans warmed and sea ice around Antarctica disappeared, causing a significant part of the Antarctic ice cap to melt and dramatically elevate global sea levels (left). New research warns that a warming world caused by increased carbon dioxide in the atmosphere and coupled with periodic changes in the geometry of Earth’s orbit could warm oceans, leading to a loss of sea ice (right) and sparking a dramatic retreat of the Antarctic Ice Sheet, and elevate sea levels worldwide. Courtesy of Richard Levy

Underpinning the new perspective of the Antarctic Ice Sheet is a refined assessment of the sensitivity of the Earth’s climate system to changes in obliquity, a powerful tool for probing the icy history of Antarctica.

The research is important because it teases out the pattern of growth and decay of the ice sheet over geologic time, including the presence of sea ice, a thin and fragile layer of frozen ocean surrounding Antarctica. A critical finding suggests that in a world warmed by a growing amount of atmospheric carbon dioxide, a loss of sea ice would likely amplify the cyclic effects of the Earth’s obliquity on the ice sheet as ocean waters warm. A loss of sea ice due to warming climate could trigger instability of the Antarctic Ice Sheet with dire implications for global sea levels.

“What has become apparent through this work and other studies is that the Antarctic Ice Sheet isn’t just sitting there. It is vulnerable to decay.”

“What this study does is characterize the growth and decay of the Antarctic Ice Sheet and sheds light on what is forcing it to change,” explains Meyers, a UW–Madison professor of geoscience and an expert on how climate responds to changes in solar radiation from Earth’s astronomical motions. “What has become apparent through this work and other studies is that the Antarctic Ice Sheet isn’t just sitting there. It is vulnerable to decay.” 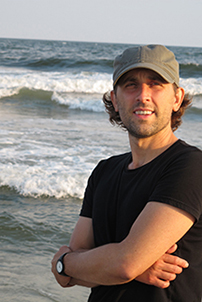 First measured in the late 1950s by UW–Madison glaciologist Charles Bentley, the West Antarctic Ice Sheet alone contains enough ice to raise sea level by roughly 5 meters. The continental ice sheet is, by far, the largest single mass of ice on Earth — miles deep in places and containing more than 26 million cubic kilometers of ice. The ice sheet is so heavy, Bentley and his colleagues discovered, that much of the West Antarctic ice sheet sits on land thousands of meters below sea level, making it a marine ice sheet in places.

Marine ice sheets, note Levy and Meyers, are especially sensitive to heat delivered by ocean currents. Fast flowing inland ice streams of the West Antarctic are buttressed by floating ice shelves, which — if diminished or lost — raise the possibility of a runaway flow of West Antarctica’s marine ice.

The new research suggests that a reduction in sea ice due to climate change would erode the barrier keeping the ice sheet — including the parts of it below sea level — in place.

“Sea ice creates a barrier between the ocean and the ice. If we fail to achieve carbon dioxide emissions targets and Earth’s average temperature warms more than 2 degrees Celsius, sea ice will diminish and we jump into a world that is more similar to that last experienced during the early to mid-Miocene,” says Levy, referencing a geological epoch that ended about 14 million years ago when the Earth and its polar regions were much more temperate, with an atmosphere supercharged with carbon dioxide and global temperatures, on average, warmer by 3 to 4 degrees Celsius (7 to 9 degrees Fahrenheit).

“All of these data suggest we need to get cracking and reduce our greenhouse gas emissions.”

To recreate the history of the ice sheet, Meyers and Levy turned to the geologic records surrounding Antarctica and linked them to more distant deep-sea marine sediment cores containing the fossil shells of ocean dwelling microscopic organisms known as foraminifera, or forams. The chemistry of foram shells, oxygen isotopes in particular, contains a signature that documents the ebb and flow of Antarctic ice, Meyers explains. Forams living in the deep ocean accumulate isotopes in their shells, and different isotopes of oxygen can yield a detailed chemical record of the changing volumes of the Antarctic Ice Sheet.

These geological records, say Levy and Meyers, suggest significant variability in the size of the Antarctic Ice Sheet driven by the predictable changes in Earth’s astronomical parameters and threshold changes in atmospheric carbon dioxide levels. Prior to this new research, why the ice sheet responded differently to the same astronomical cycles at different times was a puzzle. Linking those cycles to a detailed chemical record suggests that elevated carbon dioxide in the atmosphere and the resulting loss of sea ice around the Antarctic played a big role in amplifying the effects of changes in the Earth’s astronomical motions on the durability and stability of the Antarctic Ice Sheet.

“All of these data suggest we need to get cracking and reduce our greenhouse gas emissions,” says Levy, noting that 2017 and 2018 saw reduced Antarctic sea ice after several decades of growth. “We don’t want to lose that sea ice.”