For Tyler Vermey, a crazy cross-country trip that included the aftermath of an earthquake and a raging blizzard was just the beginning of his role in fighting the COVID-19 pandemic.

Until March 15, he and his wife had been keeping an eye on the pandemic from their home in Utah.

“Like anyone else, we were just monitoring the outbreak and taking precautions,” Vermey says. “Then I got a call asking me to come back to Madison to help with making flow control valves for ventilators.” 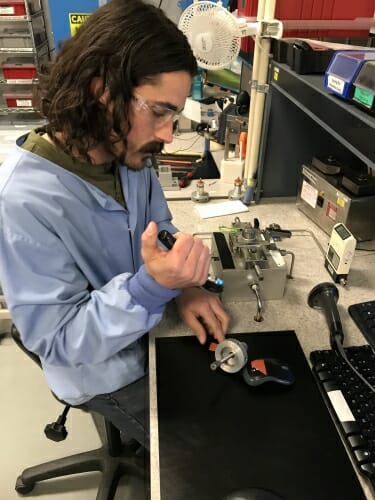 Tyler Vermey, a UW–Madison engineering alum, works on flow control valves at GE Healthcare’s Madison plant. The plant is making ventilators and other medical equipment to combat the COVID-19 pandemic, and Vermey traveled from Utah to Wisconsin to help the effort. Photo courtesy of GE Healthcare

Vermey, who earned his bachelor’s degree in industrial engineering from the University of Wisconsin–Madison in 2016, began working at GE Healthcare after he graduated, first as a contractor for a few months before becoming a full-time manufacturing engineer at the company’s Madison location. After two years in Madison, Vermey moved to Salt Lake City, Utah, where he’s continued work for GE Healthcare as a manufacturing project leader.

It turns out, however, that during his post-graduation stint at the Madison location, he acquired expertise in making ventilator flow-control valves after spending six months learning how to make the valves.

Ventilators are pieces of life-support medical equipment that help patients breathe when they lose the ability to do so on their own. They’re crucial for patients suffering from severe respiratory effects of COVID-19, and right now, the nation is facing unprecedented demand for ventilators. GE Healthcare and other manufacturers are ramping up ventilator production as COVID-19 spreads across the United States.

As part of that effort, GE has bolstered its staff with engineers like Vermey, who are playing a critical role in the fight against the pandemic.

“It’s pretty amazing to be back in Madison and see everyone coming together to provide for the world,” Vermey says. “It didn’t hit me until I got back to the facility and saw how many people are coming to volunteer. There are so many people who are giving up a lot to do this. It’s really, truly amazing to be a part of it.”

For him and his wife, Krista, it’s been a whirlwind journey.

With their paraplegic dog Bruno, they set out by car for Madison on Wednesday, March 18, in the aftermath of a magnitude 5.7 earthquake that struck near Salt Lake City earlier that day. From there, their travels only grew more fraught.

“We were driving at night, just trying to see how far we could get,” Vermey says. “Near the border of Nebraska and Wyoming, we ran into some really dense fog. I could barely see the front of my car and was following the center line. With the rush of trying to get out of town, I hadn’t checked the weather. Then I looked at my phone and realized we were driving into a blizzard.”

Vermey and his family were, fortunately, near a town where they could stop and hunker down for the next day as the snowstorm blew through. They arrived in Madison in the early hours of March 21, and Vermey reported to work to start making valves right away.

Now, he says, the lessons learned as a UW–Madison engineering student are critical as his new group works to build much-needed ventilators.

“The teamwork skills I learned from my senior project and in the College of Engineering have been really helpful,” he says. “A lot of what we do here is teamwork, working together to look at problems from different angles and come up with solutions on the fly, and doing what it takes to ensure the production runs smoothly so we’re building quality products for our customers.”

“This is such a difficult time for everyone around the globe, but it’s really rewarding to be part of a team that’s developing solutions,” said Kevin Rehl, GE Healthcare manufacturing engineering manager and himself a UW–Madison engineering alum. “Working with Tyler and other engineers brings into focus the value of our training and our ability to tackle challenges both individually and collectively within GE Healthcare.”