Although employment rose by almost 60,000 jobs in the state, there was no reduction in poverty from 2013 to 2014, according to the latest results from researchers studying the economic and policy forces that affect Wisconsin poverty. Instead, poverty remained unchanged at 10.8 percent.

The analysis that led to these results was developed by Timothy Smeeding, an economist at the University of Wisconsin–Madison La Follette School of Public Affairs, and Katherine Thornton, an Institute for Research on Poverty (IRP) programmer analyst, and outlined in their eighth annual Wisconsin Poverty Report. Support for the study came from the Wisconsin Community Action Program Association (WISCAP). 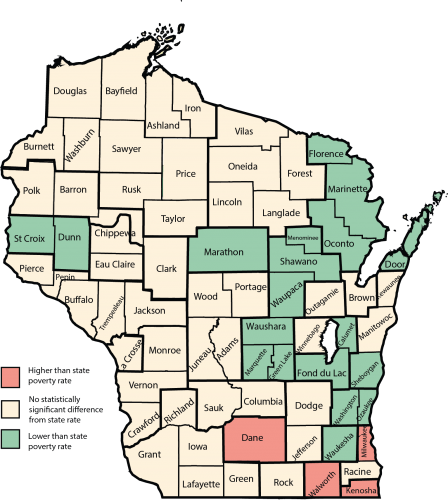 The overall poverty rate in Wisconsin remained flat from 2013 to 2014 at 10.8 percent, but there was significant variation in poverty across regions in the state. Counties colored red are higher than the statewide average; green counties are lower. Source: Wisconsin Poverty Report

This lack of decline in poverty, the researchers found, is due in part to the fact that most of the new jobs were low wage or part-time jobs, and in part due to decreases in the effects of antipoverty policies such as food assistance and refundable tax credits, as well as increases in medical expenses and work-related costs.

The Wisconsin Poverty Measure poverty rate, which includes tax credits and benefits like food assistance, is about 1.3 percentage points below the official poverty measure, suggesting that the FoodShare (SNAP) program and refundable tax credits like the Earned Income Tax Credit (EITC) still have a large positive effect on poverty reduction in Wisconsin.

There were some bright spots in the report. For example, among the elderly, poverty fell from 9 percent to 6.8 percent. And more families with children earned their way out of poverty. While the overall WPM child poverty rate remained flat at 11.8 percent, this rate is still far below the official child poverty rate, which was 17.6 percent in 2014 — reflecting the strong positive effects of FoodShare (SNAP) and refundable tax credits on families with children who otherwise cannot earn enough to escape poverty.

Another significant finding was that the overall statewide poverty rate hides substantial variation in poverty across regions, suggesting an uneven pattern of recovery of jobs and incomes. Within Milwaukee County, for example, overall poverty rates ranged from 8 percent in one southern subcounty area to 33.5 percent in the central city of Milwaukee.

The overall statewide poverty rate hides substantial variation in poverty across regions, suggesting an uneven pattern of recovery of jobs and incomes.

Meanwhile, eight areas have rates that are significantly lower than the statewide rate, including the counties of Washington/Ozaukee, Fond du Lac/Calumet, St. Croix/Dunn, Marathon, and Sheboygan, all below 6 percent; Waukesha at 6.4 percent, and several others in northeastern Wisconsin below 8 percent.

“As appreciation grows for the importance of timelier, more accurate information about poverty in state and local areas than national statistics can provide, more researchers are replicating the Wisconsin Poverty Measure model that was devised by researchers at the Institute for Research on Poverty,” IRP Director Lawrence Berger says. “I am proud that IRP is continuing its 50-year tradition of upholding the Wisconsin Idea on behalf of society’s most vulnerable members.”