Airman of the Year, a UW–Madison senior, is helping with state’s COVID-19 response

MADISON — Alex King started feeling the pull of the military as a teenager. He liked the idea of serving his country, and he wanted to be part of a team, something bigger than himself.

He also knew he wanted to attend college. Today, those two spheres have overlapped in an unexpected way. 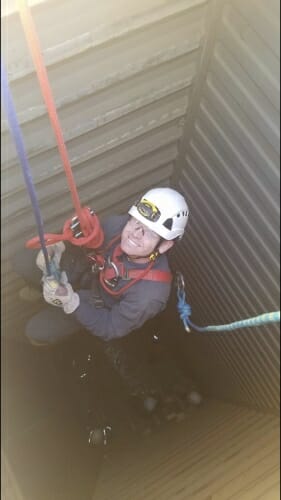 As King completes his final days of classes as a senior at UW–Madison, he also is supporting the state’s COVID-19 response as a member of the Wisconsin Air National Guard. Airmen and soldiers from the Air National Guard and Army National Guard were activated in mid-April and are now posted in Milwaukee.

King and his fellow guard members, trained as temporary personal care assistants, will help care for recovering coronavirus patients at an isolation facility if needed.

“Having the opportunity to directly assist fellow citizens and contribute to our state’s response is an honor,” says King, of Sun Prairie, Wisconsin.

King enlisted in the Wisconsin Air National Guard in September of 2016 — the same month he began classes at UW–Madison as a freshman. He’s juggled school work and military training ever since, excelling at both. In April, the Wisconsin Air National Guard announced King as the 2019 Airman of the Year. He serves as a fire protection journeyman with the 115th Fighter Wing’s Civil Engineering Squadron at Truax Field in Madison. 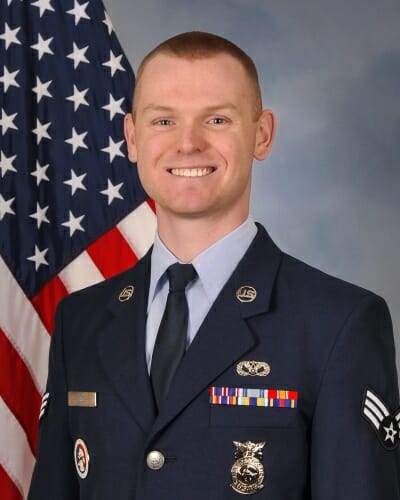 “Very simply, Alex was chosen because he exceeds the performance of his peers and the expectations that are levied upon him in his position,” says Joshua Loescher, fire and emergency services chief at Truax Field in Madison. “He has an impressive combination of maturity and work ethic that has made him successful in his military and academic careers, and will continue to make him successful well into the future.”

At Sun Prairie High School, King was in the National Honor Society, captained the soccer team his senior year, and participated in international competitions through the DECA student organization.

At UW–Madison, where he is a double major in political science and legal studies, King has logged 90 volunteer hours compiling and analyzing DUI data for the Wisconsin Alcohol Policy Project, which aims to help establishments recognize when to stop serving alcohol to customers. He has served as the coordinator of volunteers for the Wisconsin Triathlon Team and competed last fall in the Ironman Wisconsin competition. The UW–Madison Political Science Department chose King to attend the U.S. Air Force Academy Assembly, an annual conference where undergraduate students, Academy cadets, government officials and scholars discuss pressing military topics.

“Given an individual with the intellect, physicality, and work ethic of Alex, you would almost expect a significant ego that needs to be managed as well,” Loescher says. “But he does all of this completely devoid of any negative attitude or ego at all.”

During his freshman year, King began training with the Air National Guard one weekend a month. He completed basic training during the summer of 2017, then took the 2017-18 academic year off for technical training and to work for six months for the Truax Field Fire Department. He returned to UW–Madison in the fall of 2018 and is completing his bachelor’s degree this spring in three years.

King says the award as Airman of the Year took him by surprise.

“I’m really humbled by it,” he says. “I just always try to work hard and do my part. I give credit to my supervisors for seeing my involvement in the community and at school as well as inside the National Guard and putting it all together as a nomination.”

He describes the last few weeks as fast-paced.

“Between the Air National Guard commitment and cranking out school work, I definitely have needed to be on top of things,” he says. “I’ve still got a couple of papers to write and finals to study for.”

Post-graduation, King intends to serve full time with the Air National Guard. He has been accepted to pilot training school and will be among the pilots of the 115th Fighter Wing to fly the military’s newest fighter jets, the F-35s, which are scheduled to arrive at Truax Field beginning in April 2023.