After hundreds of thousands of ID photos, ‘the Wiscard lady’ retires

You probably know her face — she no doubt knows yours.

If you’ve worked or studied on campus anytime since 2002, Almaz Yimam likely snapped your ID photo. 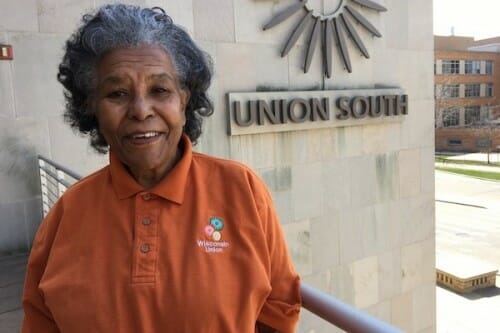 Almaz Yimam has been the welcoming face of the Wiscard office at Union South for almost 20 years. “Everyone is my friend,” she says. She retired April 2. Photo: Doug Erickson

“She just has that type of personality that is so welcoming,” says Jim Wysocky, the Wiscard program manager. “You’ll see her talking and laughing with someone and you assume they’re longtime friends. Then you find out they just met.”

Each year, about 25,000 Wiscards or other campus ID badges are issued, replaced or renewed. For hundreds of thousands of new students and employees, Yimam would have been one of the first to welcome them to campus. (She typically worked the counter with a student employee.)

“Just call me the Wiscard lady,” she says.

Though each Wiscard interaction is brief — just five or 10 minutes — Yimam sought to make the experience special. She often joked a bit or asked a question about what brought the person to campus.

Her own path to campus had its challenges. She immigrated to the U.S. from Ethiopia in the mid-1990s, a solo parent seeking a better life and more educational opportunities for her sons, ages 12 and 14 at the time.

Her first job in Madison was cleaning hotel rooms. Hired later by UW Hospital, she split her duties, working 32 hours each week as a receptionist and eight hours as a housekeeper. Each evening, she worked an additional four hours cleaning offices around town. As the years went on, she became a U.S. citizen, and both her sons were accepted to UW–Madison.

Her job at the Wiscard office fit her wonderfully, she says.

“My personality is to help people — I really like to make them feel comfortable,” she says. 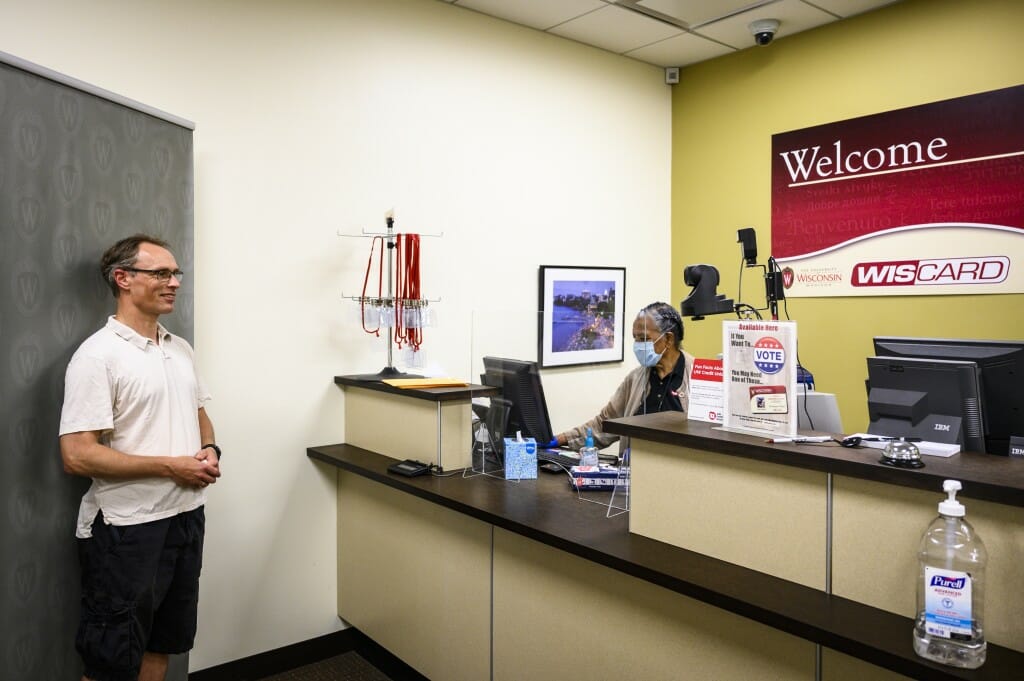 In June 2020, Almaz Yimam takes a photo of Johan den Boon, an associate scientist with the Morgridge Institute for Research, to update his Wiscard. Although most of campus was closed at the time due to the coronavirus pandemic, the Wiscard office at Union South remained open as an essential function. Photo: Jeff Miller

Yimam praises her co-workers, especially Wysocky, her boss. When the pandemic hit, he began driving her to and from work. She does not own a car, and he did not want to put her in the position of taking mass transit. The arrangement lasted until her final day on the job.

“These are the kind of people I work with — they are all my friends,” Yimam says. “I just want people to know that there are nice people in the world.”

Now that Yimam has retired, it can be told that sometimes, if a student lacked the money to replace a lost Wiscard, she paid the $25 out of her own pocket.

“Yes, I did do that,” she says. “Jim used to be disappointed with me, but I would see these students in front of me and think of my own kids.”

“My personality is to help people — I really like to make them feel comfortable.

Because of the pandemic, Yimam’s colleagues could not throw her a big farewell party. Instead, they encouraged people to stop by and say goodbye.

That’s how Kathi Kempen, Yimam’s first supervisor, ended up at Union South on one of Yimam’s final days. She drove from her home in Wisconsin Rapids just to congratulate Yimam on her retirement.

“I would not let you go without seeing you,” Kempen said.

“I love this woman so much,” Yimam said.

Those who couldn’t stop by sent notes, like English Professor Emily Auerbach, founder and co-director of the UW Odyssey Project, a yearlong humanities class for adults facing economic barriers to higher education.

Each September, Odyssey Project students travel by bus from South Madison to the Wiscard office. Yimam arranged to stay open extra hours to accommodate the group and enthusiastically welcomed them.

“Some of the students had been told they were ‘not college material,’” Auerbach wrote. “Almost all students in my program come from communities of color and have experienced racism. So to have your smiling face and warm presence was crucial at that moment early in the academic year.”

Now 68 and the grandmother of three, Yimam is ready for the next phase of her life. Her faith is very important to her, she says. She plans to move back to Ethiopia this summer to undertake missionary work.

“I like my life here, but I can make a difference there,” she says. “Whatever resources I have, I want to share. With the money I get from my retirement, I can change people’s lives.”